Democrats have raised record-breaking $11.5 million in 2020, versus $1.5 million for Republicans.

By Wisconsin Democracy Campaign - Jul 21st, 2020 03:39 pm
Get a daily rundown of the top stories on Urban Milwaukee

State campaign finance reports recently filed with the state showed state Democrats raised the bulk of their cash in recent months from numerous individuals who made six-figure contributions and one contributor, Democratic Illinois Gov. J.B. Pritzker, who gave the party $2,490,000.

Meanwhile, state Republicans raised about $728,450 between late March and June. The state GOP report showed more than two-thirds of their fundraising came from political action committees and corporations.

Overall, for the first six months of the year, Democrats raised a total of $11.5 million – eight times more than the $1.37 million raised by Republicans. 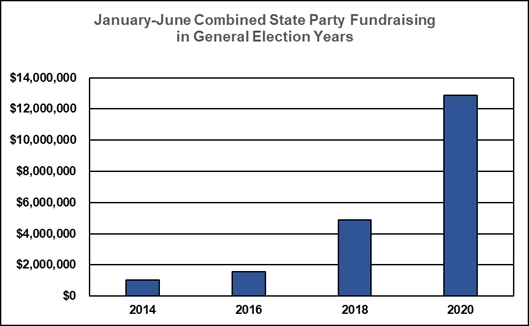 The leap in fundraising since 2014 is the result of sweeping changes to campaign finance laws enacted in 2015 by former Republican Gov. Scott Walker and the GOP-controlled legislature.

The top individual contributors to the state Democratic Party in the first six months of 2020 were:

Paul J. Brown and Lisa Mennet, of Seattle, Wash., $115,000 each. Brown is a retired photojournalist and Mennet is founder of a Seattle mental health services clinic for children.

The top individual contributors to the state Republican Party in the first six months of 2020 were: