Mayor calls for taking down statue created in 1961, criticized as a stereotype.

By Hope Kirwan and Megan Hart, Wisconsin Public Radio - Jul 14th, 2020 02:23 pm
Get a daily rundown of the top stories on Urban Milwaukee 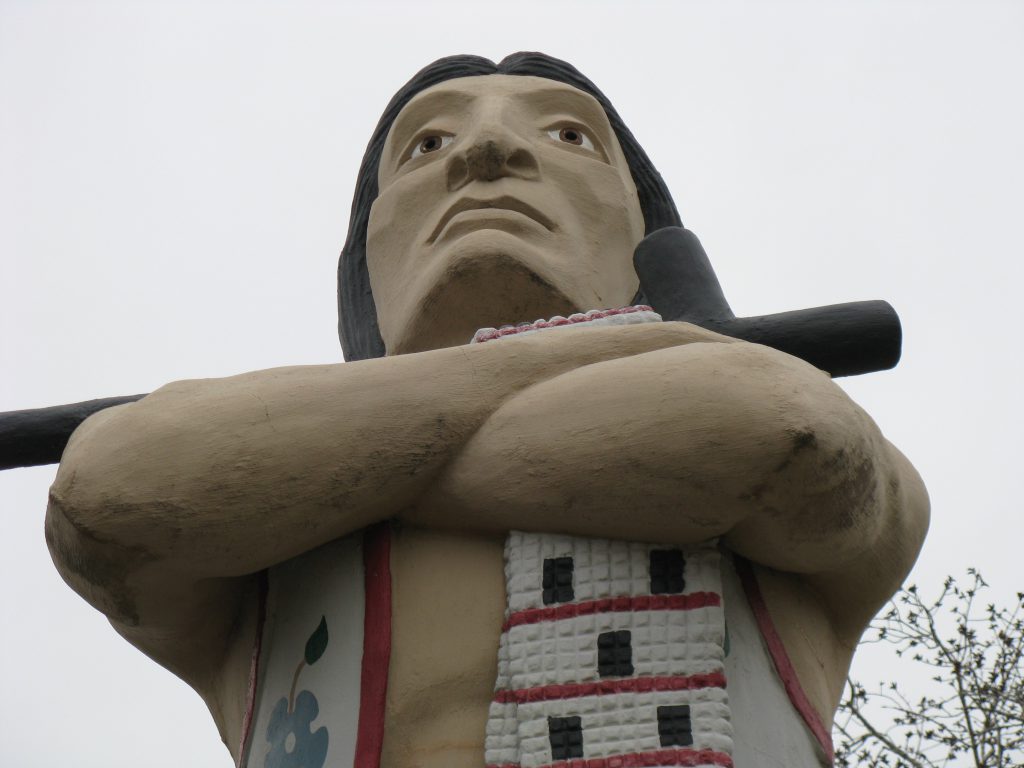 File photo of the statue of the Hiawatha Statue located in Riverside Park in La Crosse. Joe Passe via Flickr (CC-BY-SA)

The mayor of La Crosse has asked the city’s Board of Park Commissioners to remove a controversial statue depicting a Native American.

Mayor Tim Kabat sent the letter on Monday, asking the board to move forward with removing the “Hiawatha” sculpture from Riverside Park.

Created in 1961 by Anthony Zimmerhakl, the 25-foot statue has been controversial for years, with critics saying the figure does not represent the Indigenous people of the La Crosse area and perpetuates stereotypes about Native Americans.

Kabat said the city has been working to return the statue to Zimmerhakl’s family for over two years and the family is still working to find a relocation site. But Kabat said he wanted to move forward with removing the statue.

“I don’t see how we can ignore what is going on everywhere else where people and communities are facing these statues and these symbols and really trying to address them. I just think La Crosse is no different than these other communities,” Kabat said. “This clearly has been an issue of controversy (in La Crosse) and caused a lot of emotions on both sides and I do feel it’s time that we address it.”

Kabat said funding needed to remove the statue and store it will come from the city’s parks and recreation department. He said he’s also hoping the board will bring together community stakeholders to find a way to mark the location as important to the Ho-Chunk Nation and other Indigenous people. The statue is currently located near the confluence of the Mississippi, the La Crosse and the Black rivers.

“We’re going to hopefully pull some people together to commemorate that site as an important place for Native people, as well as to honor Anthony Zimmerhakl, the artist,” Kabat said. “I don’t know what that even looks like, but I would like to think that we would be able to come together as a community.”

This comes amid a national reckoning about racial justice, sparked by the death of George Floyd, the 46-year-old Black man killed by police in Minneapolis earlier this year. 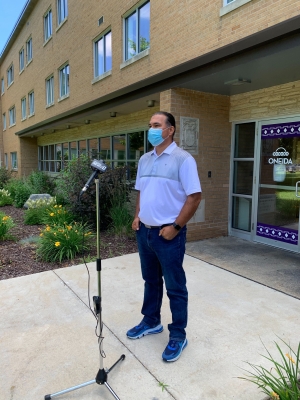 Oneida Nation Chairman Tehassi Hill spoke to reporters Monday, July 13, 2020, after the NFL team from Washington D.C. announced it would change its name, which had long been deemed offensive to American Indians. Photo by Megan Hart/WPR/

Advocates scored a national victory Monday when the NFL team from Washington, D.C. announced it would change its name and logo. The name had long been considered a racist slur against American Indians.

The Oneida Nation has been fighting against the use of race-based mascots for more than 50 years, Chairman Tehassi Hill said Monday. He hopes the change in Washington creates a domino effect causing other professional sports teams to follow suit, he said.

“I do believe it’s better late than never and it’s a march I guess, so one step at a time as we keep moving forward,” he said.

More than two dozen high schools across Wisconsin still use Native American mascots. Earlier this year, the Wisconsin Association of School Boards failed to pass a resolution that would call on districts to retire them.

Native American mascots are often derogatory in nature, and they show little understanding of the cultures they depict, Hill said.

‘It’s Time That We Address It’: La Crosse Mayor Calls For Removal Of Hiawatha Statue was originally published by Wisconsin Public Radio.