Would require approval for all purchases. 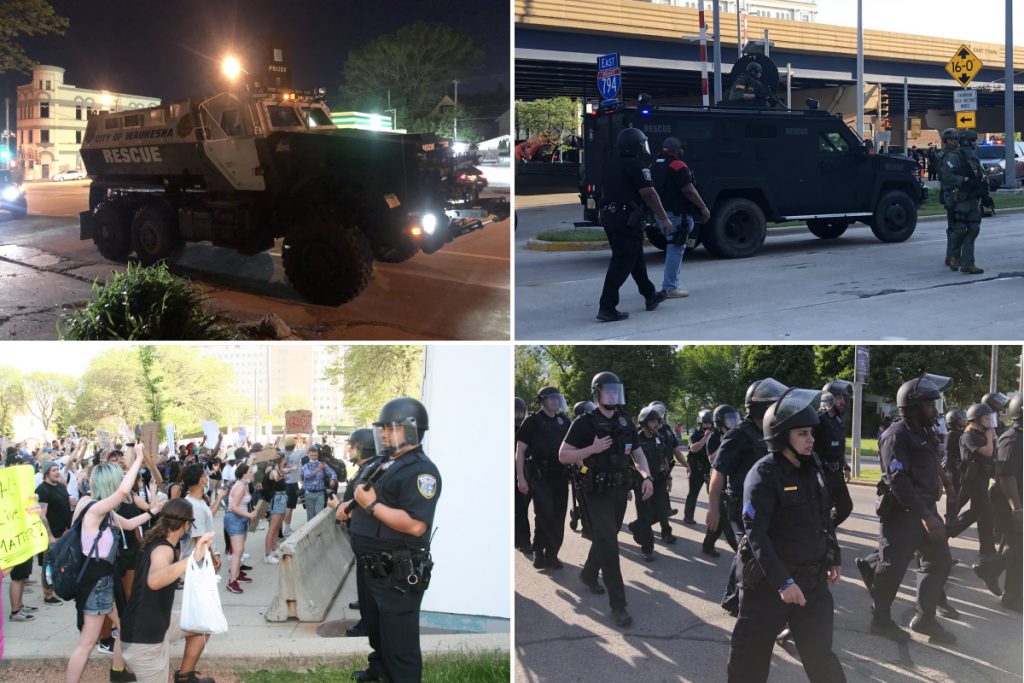 Should the Milwaukee Police Department have to make public any purchase of “military-grade” equipment?

Introduced by Alderwoman Milele A. Coggs, a resolution would require the police department to get council approval for all purchases of “crowd-response, crowd-control, military-grade and militaristic equipment.” It explicitly includes purchases of armored vehicles, flashbang grenades and launchers, tear gas, rubber bullets, batons, assault rifles, riot shields, heavy body armor and other equipment.

“It’s another lens for us to be transparent with the community for the equipment that is being sought,” said Coggs in introducing the proposal. Ald. Nik Kovac said he expected some council members to vote for the oversight power, but also to vote for allowing the equipment to be acquired.

Assistant Chief Michael Brunson declined to identify specifics of the department’s current inventory of equipment, minus the two armored vehicles it owns. “I am not going to get into numbers during the open session at all,” he said. The committee never went into closed session to receive a detailed report.

He indicated the department opposes the change because it would hamper the ability to buy emergency supplies. When asked by Alderman Khalif Rainey if the resolution cause the department to exhaust supplies of less-lethal equipment, Brunson said it was the department’s biggest concern. “Absolutely it would, especially in an urgent situation,” he said.

Brunson said for periods of prolonged unrest, like the city recently went through, the department needs to replenish supplies quickly.

“That’s not true, the majority of these purchases were not made in a state of emergency,” said Coggs. “That’s a false narrative and the public watching should know it.” Referencing a recent emergency council meeting called with two hours notice, she said the council could respond to emergencies.

Brunson said the department also gets council approval for its bigger purchases. The council recently held the purchase of items, including tear gas, to be used for the Democratic National Convention and maintained for future use. “I don’t want anyone to say we are not transparent because many of the items you have already looked at,” he said.

The Assistant Chief said much of what is received from the military as surplus is basic equipment. He ticked off a list of items received including shields, face shields, sleeping bags, meals ready to eat (MREs), a school bus, horse trailer, four-wheeler with a plow and military-used Chevrolet truck. “Those kind of things,” he said. He said the district does not get its chemicals from the 1033 military surplus program.

Ald. Mark Borkowski joined Brunson in opposing the proposal, saying it was a matter of common sense, not micromanagement. “I concur with chief Brunson that the police department shouldn’t have to come to the Common Council for approval,” he said.

“The idea that the public should not be aware of the purchases and gifts of military-grade equipment, whether you support it or not, that there is not a public lens on it is a problem,” said Coggs.

Borkowski found support from Ald. Scott Spiker for his opinion. “I am worried that if the Common Council steps in and prevents less lethal ways of addressing a crowd it puts them in an impossible position,” said Spiker. He said he hoped to avoid the purchasing process becoming political. “One of the reasons we have a civilian Fire & Police Commission is to take the politics out of policing.”

The body voted three to two, with chairwoman Marina Dimitrijevic, Chantia Lewis and Rainey in favor. Borkowski and Spiker opposed the measure. Coggs and Kovac are not members of the committee and could not vote.

The proposal will next go before the full Common Council for final approval. It is sponsored by Coggs, Lewis, Kovac and Jose G. Perez.

BearCats Versus MRAPs And Are They Tanks?

Before getting to the details of the purchasing resolution, the committee spent over a half-hour asking questions of Brunson regarding MPD’s armored vehicles and access to those controlled by other departments.

“We have two vehicles that are called BearCats,” said Brunson. “BearCats are commercially made vehicles for law enforcement, they are not military vehicles.”

“The BearCat is a rescue vehicle, it does not have offensive capabilities,” he said. Brunson, comparing the vehicles to armored trucks, explained that the department uses the vehicles during confrontations to retrieve injured individuals, including non-officers. He said the BearCats have been shot at and standard vehicles would have resulted in injuries or death for personnel.

“I know that the optics don’t look good at times, but we are about protecting our personnel,” he said.

But council members expressed concern about another, much larger vehicle that has appeared on city streets, and where it comes from. In multiple situations, a Mine Resistant Ambush Protected (MRAP) vehicle owned by the City of Waukesha has appeared on Milwaukee streets. Urban Milwaukee spotted it parked next to a Waukesha-owned Humvee on N. Humboldt Blvd. near E. North Ave. in Riverwest the night of Saturday, May 30th.

Rainey, calling it a “tank,” asked how it and other vehicles end up in Milwaukee. “There was a drug raid in my district and there was a tank brought in from the City of Waukesha,” he said.

Brunson said MPD calls other departments asking for support during emergencies. In other situations, Brunson said departments notify MPD they will be serving a warrant in the city and MPD offers support.

Kovac said situation could create a problem for oversight for the council because it becomes a policy issue overseen by the Fire & Police Commission. The council controls the budget process, but the commission sets and regulates public safety policy.

Brunson said neither the BearCat, nor the MRAP vehicles are tanks, neither have armored firing turrets.

He said MPD could have received multiple MRAPs for free, decommissioned from use in Iraq or Afghanistan. “We made the decision not to do this, part of the reason why is right here before you today,” he said.

For more on the agencies that have MRAP vehicles, see our coverage from yesterday.