By Rich Kremer, Wisconsin Public Radio - Jun 23rd, 2020 10:41 am
Get a daily rundown of the top stories on Urban Milwaukee 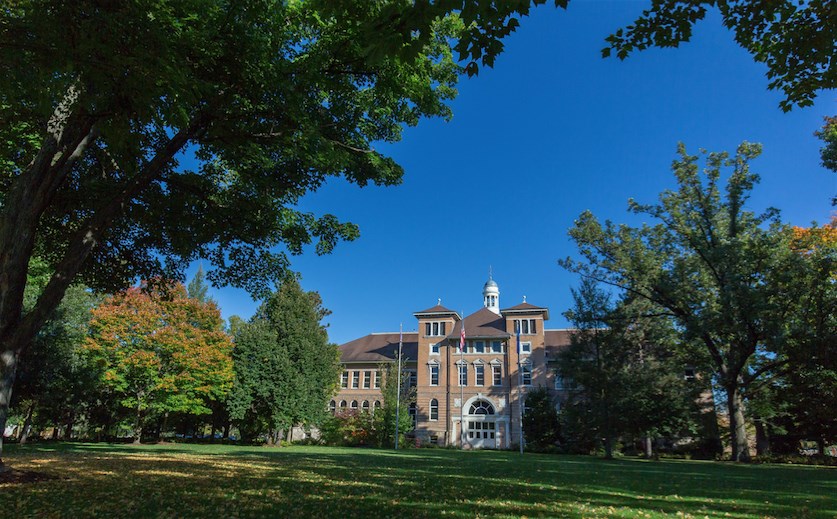 A new report shows Wisconsin is dead last among Great Lakes states when it comes to per-student funding for regional public universities. The data, gathered by the Brookings Institution, shows state appropriations declined by more than 42 percent between 2006 and 2018 when inflation is taken into account. In light of that and massive revenue losses caused by the COVID-19 pandemic, Brookings is recommending an emergency federal fund to protect public universities. 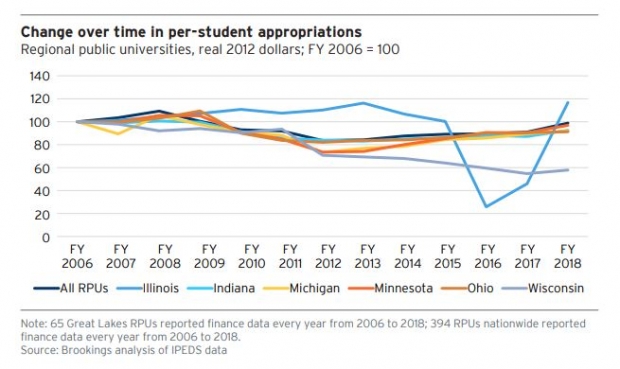 But the report noted that regional campuses have seen declining enrollment and reductions of per-student spending by state governments. Wisconsin’s state appropriations fell the most, according to Brookings.

“Wisconsin has been, at least from a per-student appropriations side, a real outlier in that you see pretty active disinvestment,” said Brookings research associate and report co-author Robert Maxim. “It’s not just neglect and malaise that you see elsewhere. It’s actually been, you know, an outright decline in real appropriations.”

Maxim said tuition freezes have happened in other states but generally they’ve been followed by increases in state support.

“And really, that hasn’t happened in Wisconsin,” Maxim said. “It’s been the tuition freeze plus disinvestment, which, you know, really gives schools pretty bad options when they’re thinking about how you can really make up the revenue.”

Since 2013, UW campuses have had to increasingly rely on reserves left over from tuition revenues to balance their budgets. When the UW System presented its current budget to the Board of Regents in July 2019, tuition fund reserves had decreased by an average of 53 percent since the freezes went into effect. The UW figures showed UW-Stevens Point had a tuition fund balance of $0.

In its budget proposal for the 2020-2021 school year, the UW System did not include a campus-by-campus breakdown of tuition fund reserves. When asked why the numbers were not included, a UW System spokesman said it was due to “late fiscal year impacts of COVID-19” and a mandated 5-percent budget cut ordered for all state agencies by Gov. Tony Evers.

State Rep. Katrina Shankland, D-Stevens Point, is a ranking member of the Assembly Committee on Colleges and Universities. She said the report showing Wisconsin in last place for supporting the state’s comprehensive campuses indicates unfunded tuition freezes have added up.

“And it’s past time for a blue ribbon commission to study long term funding sources to ensure the sustainability of our campuses and to make sure that we can not only commit to public higher education and the Wisconsin Idea, but the students, faculty and staff on campus too,” said Shankland.

Committee chair, Rep. Dave Murphy, R-Greenville, did not respond to an interview request for this story.

The Brookings report has recommendations for federal and state lawmakers, including the creation of an emergency federal fund to protect spending on public universities along with dedicated funding for students with additional educational needs. Shankland said she supports the idea of the emergency fund.

In response to declining enrollment at the state’s regional public universities and historic revenue losses caused by COVID-19, outgoing UW System President Ray Cross unveiled a list of recommendations called the Blueprint for the University of Wisconsin System Beyond COVID-19. It recommended directing regional public universities to specialize their mission and eliminating major degree programs across campuses. At the time, Cross said if the plan was enacted, layoffs would be unavoidable.

Resistance to Cross’s plan was swift and included some pushback from administrators. In response, Cross backpedaled on his initial timeline for enacting the recommendations.

What the future may look like for Wisconsin’s regional public universities is unknown as a new but not unfamiliar face is poised to take over the UW System. After a contentious search for the next UW System president failed earlier this month, the Board of Regents appointed four-term former Gov. Tommy Thompson to lead the state’s higher education system.

Report: Wisconsin Spends Less On Regional Public Universities Per Student Than All Other Great Lakes States was originally published by Wisconsin Public Radio.