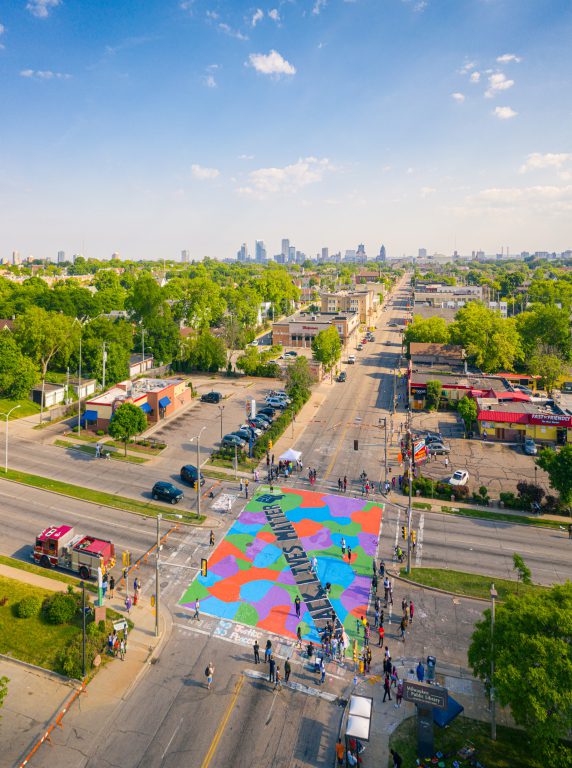 At 5,888 square feet, the mural covering the intersection has a bigger footprint than virtually every house in Milwaukee. It’s also far more colorful.

BLACK LIVES MATTER is spelled out across the 92-foot-wide intersection at a diagonal while a wide array of colorful shapes surround it.

“The idea was to get Black Lives Matter out here. It’s a very matter of fact statement, but also welcoming. It’s for everyone,” said Hill. He said it serves as a reminder for the nearby police department of the community that they serve. “It’s the intersection of the police and the people.”

Why not just paint BLACK LIVES MATTER in big yellow letters as other cities have done?

“This intersection is very unique, is six lanes across one way, four in another direction,” said Hill. “It’s a beautiful canvas.”

“It’s in the heart of Harambee neighborhood,” said Coggs. “Harambee is Swahili for let’s pull together and as you can see this is people from all over the community pulling together to create a beautiful message right here on the street.”

Coggs said Hill was an easy artist to pick to lead the effort, he’s working on a number of community projects and lives in the neighborhood in the city’s first “Arts and Resource Hub” house located a half-mile to the south.  “It just made perfect sense,” said Coggs. Hill provides art training for children through his business, Jazale’s Art Studio, located on King Drive.

What does Coggs hope comes from the mural? “One, I hope people see the beauty in us all coming together to create it. Two, I hope in the days to come as people drive across it they’re reminded of both that sense of community and togetherness that is going to help this community move forward,” she said. “I hope that one day they’ll be hoping and working for, like I am, that one day we don’t have to say these three words because it’s so woven into everything we do.”

The event replaced the 49th annual Juneteenth parade and festival, canceled because of the pandemic, that normally covers King Drive with thousands of people for much of the day on June 19th.

In addition to Coggs, Greater Milwaukee Foundation president and CEO Ellen Gilligan was spotted in the crowd as was Mayor Tom Barrett, who with the guidance of Hill’s brother Darren, grabbed a paintbrush and got to work. Alderwoman Chantia Lewis was also in the crowd as was area business improvement district director Deshea Agee.

The Milwaukee Police Department‘s district five station is just west of the intersection at 300 W. Locust St. The intersection and surrounding scenes were the site of at-times tense standoffs between police, the Wisconsin National Guard and protesters as well as the site of vandalism on May 29th. 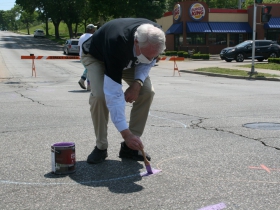 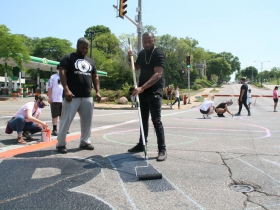 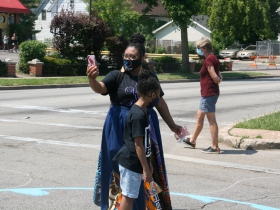 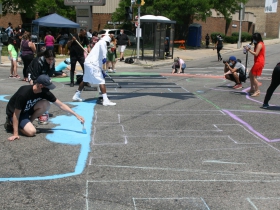 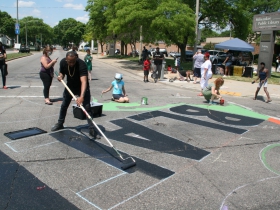 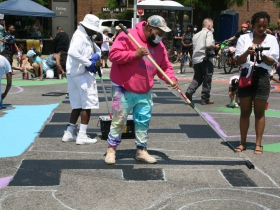 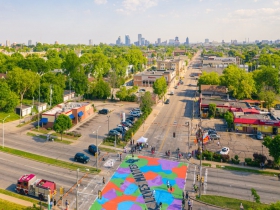