8th Night of Marches Leads To South Side

Nitty and Coleman lead marchers through the south side and back. 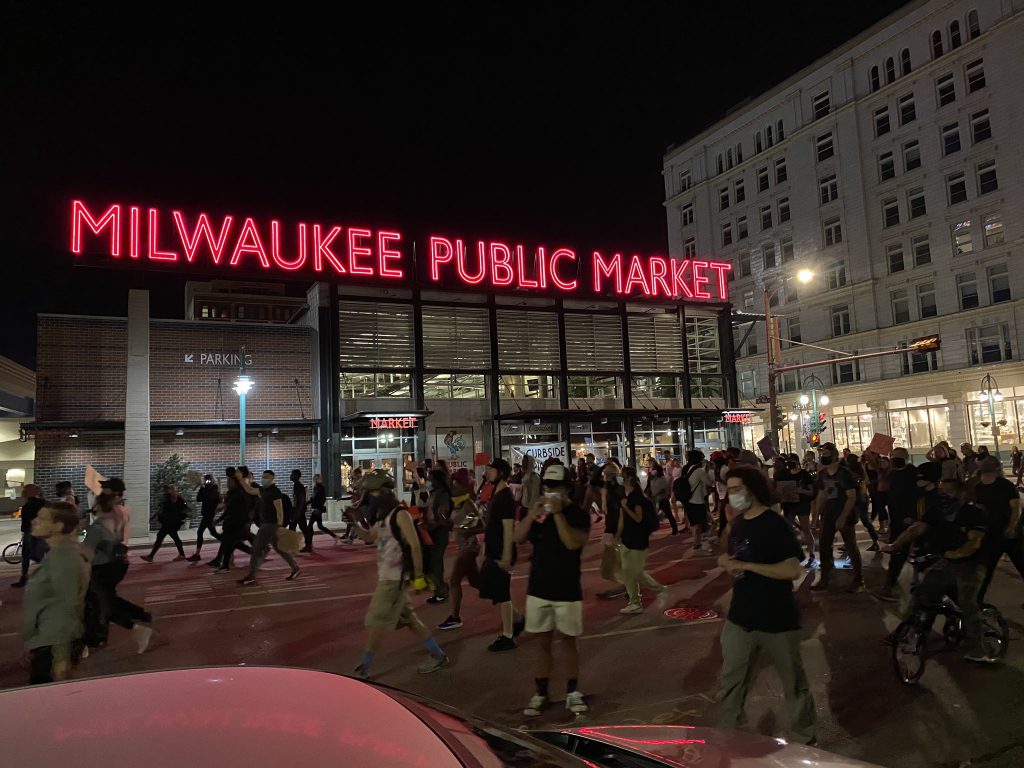 A protest march outside the Milwaukee Public Market on the morning of June 6th. Photo by Graham Kilmer.

Eight days in and still no sign of letting up.

Protesters in Milwaukee held two different marches again Friday in response to the killing of George Floyd in Minneapolis and police brutality.

Every protest held over the past eight days has been in honor of George Floyd, on Friday protestors held special regard for Breonna Taylor. She was killed by Louisville police in March after they entered her home under a no-knock warrant, while searching for people that were already in custody. It would have been her 27th birthday Friday.

Twice, during a march organized and led by Frank Nitty and Khalil Coleman, the protesters stopped and sang happy birthday to Taylor.

Nitty and Coleman’s march began in Merrill Park, ended up going south until it hit W. Lincoln Avenue, then taking S. Kinnickinnic Ave. and Water Street back to Wisconsin Avenue and the march’s starting point near N. 35th St. and W. Wisconsin Ave.

This march was another peaceful march, using cars in front and back of the crowd of marchers to control traffic. Similar to what has been has been observed recently, it was increasingly well organized and supplied. Marchers communicated with hand signals, there were about half a dozen volunteering as medics, and water, masks and hand sanitizer were readily available to all involved.

State legislators Sen. Lena Taylor and Rep. Jonathan Brostoff were spotted by Urban Milwaukee participating in the march. Both were also at Thursday’s march.

This march, like others organized by Nitty and Coleman, was long. It began at 4 p.m. in Merrill Park and the marchers didn’t return to their starting point until nearly 2 am.

That went on for several minutes, until Coleman used a megaphone to draw the marchers’ attention to a young girl at the march with her mother. Coleman let her speak into the megaphone, she said “Black Lives Matter” drawing cheers and applause from the protest.

Khalil Coleman diffuses the tension with this moment pic.twitter.com/qyzmw9DUKz

Nitty introduced a white couple that had decided to spend their 21st wedding anniversary with the group. The couple issued a call to keep marching for justice, as the husband’s family has done for 90 years.

As the marchers moved on, the caravan had its turn in front of the police officers lined up in front of district two. It took approximately 15 minutes for the caravan to pass, all the while honking, many saying “F*ck the Police” and other insults. While many others simply drove past, waved protest signs, or chanted “Black Lives Matter.”

When the caravan becomes this long, it is hard for the organizers to exert any control over the further ends of it. After the marchers had passed through Bay View, Urban Milwaukee saw several cars in the trailing caravan driving recklessly, doing donuts with passengers hanging out of the windows.

The march passed through the South Side Friday night. After entering Walker’s Point, Rafael Mercado, a community activist, joined the march. He led marchers in chants of “No puedo respirar” and “I wanna go home,” the latter being a quote from Joel Acevedo as he was being choked by an off-duty Milwaukee Police Officer at a house party. Acevedo later died from the injury and officer Michael Mattioli has been charged with homicide.

Mercado said that Nitty and Coleman’s marches were making history, notably in how they were uniting people of different races from across Milwaukee in one of the most segregated cities in the country.

For a number of videos and other details from along the march route, follow Graham Kilmer‘s Twitter thread.