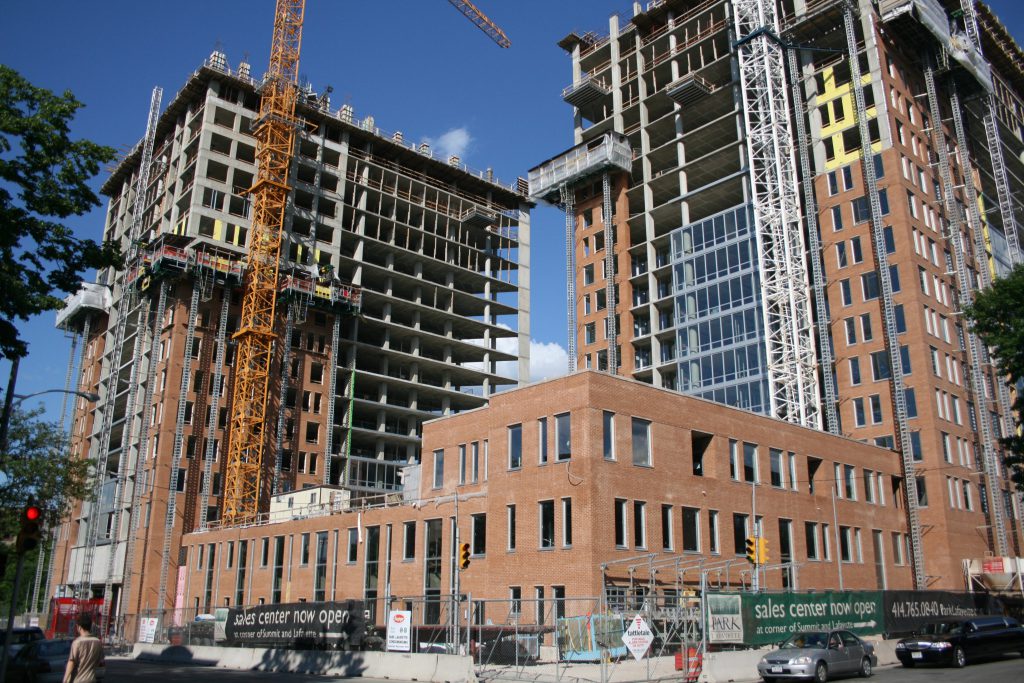 Park Lafayette Towers while it was under construction.

The Chicago developer of Wisconsin’s largest condominium project is serving time in the Oxford Federal Correctional Institution in Adams County with a release date of April 8th, 2025.

Warren N. Barr III, 68, was the head of Renaissant Development Group LLC, which began sales and marketing for the 280-unit Park Lafayette Towers, twin 20-story buildings at 1918 E. Lafayette Pl., in 2005. Construction was underway in 2007, with a sales and marketing office and  a model unit located nearby. The timing was horrible: just as the building was ready for occupancy, the Great Recession depressed the real estate market. Only eight units were sold, and Barr lost the property in a $100 million foreclosure in 2009. Fortunately, the buildings had been completed by that time, as my colleague Jeramey Jannene reported then, making it easy for receiver Bob Monnat of Mandel Group to successfully market the Park Lafayette Towers units as apartments.

This is a rather routine story of a failed development and a cocky investor gone bust. But the collapse of the market, and the failure of the Park Lafayette caused Barr to take some desperate moves that led him to prison in Wisconsin. His path there started with a simultaneous high-rise project in Chicago, the birthplace of the skyscraper.

In 2004, Barr, operating as 13th & State LLC, began development of Vision on State, a 253-unit condominium project in the South Loop neighborhood of Chicago, financed with a $55.7 million loan. As was the case with the Milwaukee project, sales were slow. But Barr and five of his associates used an illegal scheme involving “straw buyers,” according to a May, 2014 indictment from the United States Attorney for the Northern District of Illinois. Barr was charged with nine felony counts of bank fraud and four counts of making false statements on mortgage applications — including his own for a unit in the building. Some 60 fraudulent mortgages were tied to the project.

According to the indictment:

Between March 2007 and July 2012, the defendants allegedly caused buyers to obtain mortgages to purchase condos at Vision on State by making false statements to lenders in loan applications, real estate contracts, and HUD-1 settlement statements about the sales price of the units, the buyers’ employment, income, financial condition, assets, liabilities, sources of down payment, and intention to occupy the condos, and the funds that 13th & State was providing such as the buyers’ down payments, buyers’ incentives, and commissions.

All six defendants allegedly caused false documents to be prepared that concealed from lenders that funds represented as the buyers’ down payments were actually provided by 13th & State, so that the buyers were contributing little or no equity, and that the purchase prices were inflated.

Barr bought a unit in the building providing false statements on his mortgage application:

Barr got involved as a buyer in this scheme … by applying for a loan to purchase a Vision on State condo. As a part of his application, Barr submitted that he had two bank accounts containing over $70,000; that he was not a party to any lawsuit; and that he did not borrow any money used as a down payment. These were all lies: Barr’s bank accounts contained about $4,000 combined; he was a party to several lawsuits; and 13th & State loaned him all the money for his down payment.

When FBI agents went to arrest Barr in 2014, they found he was living in Saudi Arabia. According to an Appeals Court ruling issued in May, 2020:

Barr spent six months in a Saudi prison, charged with $26,250 in debts, including his hotel bill, before he was released to FBI custody and escorted back to the United States in February, 2015. He pleaded guilty to the charges, and was finally sentenced to 87 months in prison in February, 2019.

I was involved in the Park Lafayette Towers project while working at Zigman Joseph Stephenson, which was hired by Renaissant Development Company to help it get neighborhood and community support for its Planned Unit Development approvals. As soon as Craig Peterson told me of the new client, I searched the internet to find out more about him. I wasn’t expecting him to be a Pritzker, but Barr did not appear to be the hotshot developer he claimed to be. I did not note any community involvement, charitable contributions or prominent developments in his name.

I had a luncheon with him at the Milwaukee Athletic Club, and he did not impress me socially. Later, our team arranged a community meeting at Von Trier to introduce the project to neighbors, who were generally supportive. There was later a touch of drama at a public hearing, when Joe Balistrieri, himself a former federal inmate, announced his opposition to the building, which would block some of the views from his Shorecrest Hotel. The plan was approved, despite the mobster’s objections.

I recall in particular one meeting with Barr and his sales manager, who was filled with rosy projections. Barr lit up at the supposed good news. After a number of sales at his pre-construction rates, he would jack up the prices for future buyers, he said, with a Chicago swagger that took me aback.