By Shawn Johnson, Wisconsin Public Radio - May 13th, 2020 01:36 pm
Get a daily rundown of the top stories on Urban Milwaukee 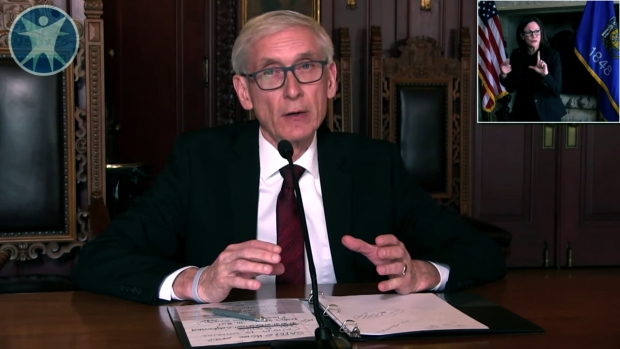 Gov. Tony Evers says his administration is looking “very actively” at relaxing regulations on medical professionals during the COVID-19 crisis. He is seen here answering reporters’ questions by video and teleconference on March 24, 2020. Wisconsin Department of Health Services via YouTube.

A strong majority of Wisconsin residents continue to support Gov. Tony Evers‘ decisions to close businesses and schools to slow the spread of COVID-19, according to the latest poll numbers from Marquette University Law School.

But approval for those restrictions slipped over the past month, driven largely by a drop in support among Republicans.

Marquette interviewed 811 registered voters from May 3-7. The survey had a margin of error of plus or minus 4 percentage points.

The poll found that 69 percent of voters said it was appropriate to close schools and businesses and restrict public gatherings. In late March, that number was 86 percent.

While Republicans generally deferred to Evers during the early days of the state’s response to the COVID-19 pandemic, that changed over the past several weeks, particularly after Evers extended the statewide “Safer at Home” order until May 26.

GOP leaders sued Evers, and if they’re successful, any future stay-at-home orders could need the Legislature’s approval. They had initially called for a regional approach to reopening, but Assembly Speaker Robin Vos, R-Rochester, said Monday that it was time to “get everyone back to work in every part of the state.”