State’s Spring Wildfire Season Upon Us

“99% of wildfires are caused by humans,” says DNR expert.

By Isiah Holmes, Wisconsin Examiner - May 12th, 2020 11:43 am
Get a daily rundown of the top stories on Urban Milwaukee 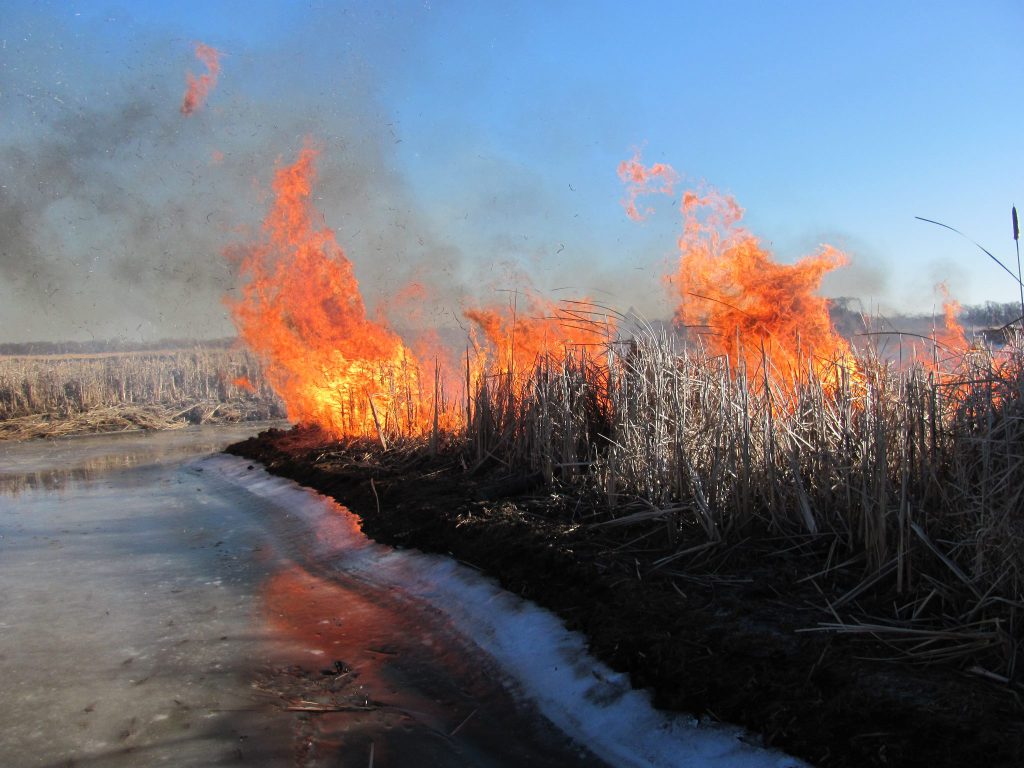 As warmer weather arrives Wisconsin has entered its spring fire season, when the risk of wildfire is highest. This period lasts from when snow starts melting, until the land begins to green up and bloom. It’s important not only to be aware of the fire season, but also what role you as a resident play in preventing wildfires.

Eric Martin, a fire suppression specialist with the Department of Natural Resources (DNR), says that a big factor fueling the spring fire season are the lower levels of humidity. “When the winds blow,” Martin said in a May 8 Zoom conference, “you can really see the fire danger increase and the potential for fires to spread quickly.” Other elements like rain or temperature also affect how the terrain dries out. “Our fine fuels that affect our fire spread are really at very critical dry levels,” Martin explained.

The DNR considers humidity values under around 25% to be “near critical or critical values,” Martin explained. Those kinds of low numbers shadowed the May 9-10 weekend. Nearly a month ago, a 200-acre wildfire was contained by the DNR in Juneau County. It broke out in the Necedah Wildlife Refuge, caused by the burning of debris.

No injuries were reported, but the fire burned upland grass and timber, and only slowed down once it reached a wetter marsh area. Parts of the area had to be evacuated, including a highway which was in the fire’s path. Containing the fire brought together resources including the DNR’s Southwest District Incident Management Team (SWD IMT), law enforcement, the U.S. Fish and Wildlife Service and fire departments from Necedah, Cutler, Armenia, New Lisbon, and three 3 SEAT (single engine air tanker) planes used to fight the fire. Meanwhile, a second fire in the town of Armenia also burned.

“It’s not uncommon for us to have large-scale wildfires in Wisconsin,” wildfire prevention specialist with the Department of Natural Resources (DNR) Catherine Koele told Wisconsin Examiner. She says that areas with a lot of sandy soil and pine trees are prone to fires, which are generally caused by people — “99% of wildfires are caused by humans,” she explained. “Our peak season is shortly after the snow cover disappears. It’s a pretty short window, and the last couple years we’ve had some fairly wet springs. Lots of precipitation, and then a quick green-up.”

Wildfires grew as a worldwide concern in recent months, after several global regions suffered intense blazes. In 2018, California routinely made headlines with its fires, which engulfed over a million acres of land. More recently, the world watched in awe and horror as over 12 million acres of Australian bush was set alight, killing around a billion individual animals. Wisconsin’s forested regions are also at risk.

In 2015, the Wisconsin Homeland Security Council released it’s strategy for the three-year period ending in 2018. The report identified a number of possible threats, among them the possibility of a 100,000 acre wildfire in northern Wisconsin. Clearly, this is an issue state officials take seriously, even at the highest levels.

On average, Koele says Wisconsin experiences around 1,500 wildfires every year. However, “they’re usually less than an acre, so they’re really small.” Most commonly, the blazes are ignited near rural communities, where people burn trash. “It’s all very weather dependent,” says Koele. Wisconsin’s climate shifting towards wetter, more humid weather, makes the conditions for wildfires less favorable. Even in the summers, the fires are less frequent than in the spring. Droughts raise the stakes, but Wisconsin hasn’t had a bad one recently.

“It’s kind of a misconception of summer being the peak,” says Koele, “that’s usually when you see wildfires in the western United States.” Those regions, however, tend to be more prone to drought than the Badger State. “Typically we stay pretty green, and lush, and humid in the summer. And that reduces the fire risk.”

Speaking from Lakewood Wisconsin on the Zoom call, Ron Schneider, a DNR cooperative fire specialist, said right now, “we are all hands on deck for forest fires in Wisconsin.” He noted that the northern two-thirds of the state are on “very high fire danger,” with the southern third also at high risk. “We are pre-positioned with all of our resources,” said Schneider. “We have firefighters, we have engines, we have bulldozers, airplanes, helicopters, and it’s a joint effort between the DNR, our volunteer fire departments, U.S. Forest Service, our tribes, all of our other partners.” In any major fire event he assures people, “We’re ready to go.”

The large number of trees blown down last year is what drew Schneider to northeastern Wisconsin, he says. “All of that fuel, what we call fuel, those trees are all lying on the ground. And if we do get a fire in any of those areas that had a lot of wind damage, it’s going to be very difficult for us to control those.” Rapid response to these incidents is crucial to containing a large blaze.

Not only are there the usual logistical challenges to overcome, but there’s also the ongoing struggle with COVID-19. “Luckily, we have a really good workforce now as far as health,” explained Schneider. “All of our firefighters are healthy, but we are anticipating maybe losing some of our firefighters because of COVID-19.” Firefighting units are practicing social distancing, avoiding contact with co-workers and the public, and have access to some Personal Protective Equipment (PPE). Great Lakes region states also have a compact to share resources across borders.

To help further mitigate the fire danger, burning has been restricted in Wisconsin. Burning permits for debris piles, barrels, grass and wooded areas have been suspended by the DNR. “The number-one cause of fires in this state is debris burning,” said Schneider. And sometimes, blazes can really spin out of control.

Koele also noted during the Zoom call that as the fire season continues, “We going to be seeing some different types of fires.” Aside from debris burning there’s also damaged power lines, ash disposal fires when people clean out wood stoves, campfires, and a variety of other activities. “Our ask right now is that you really hold off on the burning,” said Koele. “Get outside, enjoy the nice weather, but hold off. Wait until the fire danger improves. And if you do see a fire, or start a fire, it’s really critically important to dial 911 immediately. Do not try to suppress these fires by yourself.”

In 2013, a large fire consumed over 7,400 acres of land, and destroyed over 100 homes. Fires reaching as high as 20-to-30 feet were seen in the towns of Gordon and Highland in Douglas County and the Town of Barnes in Bayfield County, during an event which later became known as the Germann Road Fire. The burn covered nearly 10 miles, with a mile-and-a-half wide radius, and was unintentionally started by a logging crew.

Eight years before that event,  in northern Adams County, a fire spanning more than 3,400 acres destroyed over 80 structures. It took 25 forest rangers, 38 tractor plows, and some 200 DNR personnel to contain the blaze. Communication with the public is key to stopping such a catastrophe before it starts, say DNR specialists. It’s the old but trueful cliché: “Only you can prevent forest fires.”