Analysis: Republicans want a Badger Bounce Back, but distort details of Evers' plan.

By Erik Gunn, Wisconsin Examiner - May 9th, 2020 01:50 pm
Get a daily rundown of the top stories on Urban Milwaukee 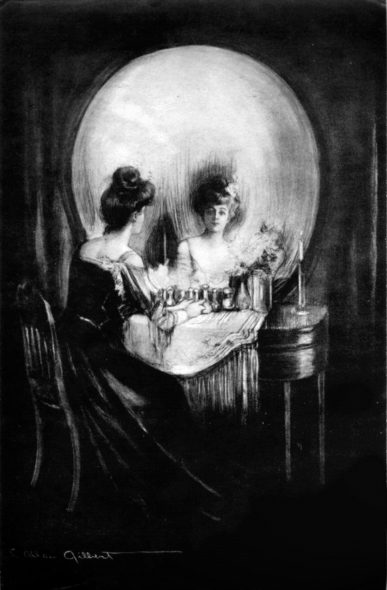 “All is Vanity,” By Charles Allan Gilbert. (Public Domain).

It’s probably not the metaphor that anyone involved in its creation would appreciate, but the public discussion of Wisconsin’s Badger Bounce Back plan for economic recovery from COVID-19 bears some resemblance to a famous Victorian-era illustration.

Gov. Tony Evers and the Republican leadership of the state Legislature are looking at the same set of facts, but seeing wildly different pictures.

Republicans look at Badger Bounce Back and all they seem to see is the skull. “It’s more like Bounce in Place,” Sen. Kathy Bernier (R- Chippewa Falls) said at a news conference Thursday in Chippewa Falls.

The news conference was part of a virtual barnstorming tour of the state by GOP legislators who are suing to block the extended Safer at Home order and seeking to replace it with a less defined “regional” approach to reopening the state’s economy.

While pursuing the lawsuit over the authority that state law confers on the state Department of Health Services (DHS) secretary to curb the spread of infectious diseases, this week Assembly Speaker Robin Vos has evoked bipartisanship and urged the joint creation of a replacement plan.

The GOP has not yet lined up behind a single plan — which Bernier seemed to mark as a point of pride. “We have three plans,” she said. “The Assembly” — meaning the Republicans there — “has a plan, and we have two plans in the Senate that we can merge together.”

Republican legislators speaking around the state Thursday avoided hot-button words like “tyranny” evoked during state Supreme Court arguments May 5 in the case. They even co-opted Evers’ favorite and oft-repeated phrase that the governor has used to describe the administration’s Badger Bounce Back Plan: “Reopening Wisconsin’s economy won’t happen with a flick of a switch, but more like the turn of a dial. It will be a gradual process,” said Rep. Rob Summerfield (R-Bloomer) at the Chippewa Falls gathering.

Still, they continued to paint the state’s plan as fixed and tacitly alluded to previous, baseless claims that it was the administration’s intention to renew the order for months on end.

“We’re not going to be able to test 5.5 million people before we open up the state,” Bernier said Thursday.

Neither Evers nor DHS Secretary-designee Andrea Palm has presented that as a requirement. Instead, the Badger Bounce Back plan has set a goal of expanding testing so that the state can respond to every outbreak at a workplace, corrections facility or congregate care home, such as a nursing home; test every nursing home resident and employee; create community testing programs around the state for people with COVID-19 symptoms; and make it possible for everyone with COVID-19 symptoms to get a test.

At an Appleton news conference, Assembly Majority Leader Jim Steineke (R-Kaukauna) echoed Bernier’s comment: “We can’t afford to wait for a vaccine before we start cracking the door and allowing businesses to start to reopen and people to start getting back to work.”

It was another straw-man argument. Evers has acknowledged that, until there is a vaccine for COVID-19, protective physical distancing measures to avoid the spread of the illness will be necessary, but he has never suggested that relaxing Safer at Home was dependent on development of a vaccine — something likely to be a year or more in the future.

Critics have been misrepresenting the Safer at Home order from the start.

Sometimes they’ve done so with simple labels. Protesters who rallied at the Capitol on April 24 in defiance of the prohibitions on group assemblies called the order a “lockdown.” Yet Evers and Palm have repeatedly encouraged state residents to spend time outdoors as the weather warms up, so long as they respect 6-foot social distancing guidelines.

Sometimes the misrepresentation has taken the form of simply ignoring what’s written on the page. When Evers announced on April 16 that Safer at Home would be extended through Memorial Day and sketched out four specific conditions for easing the limitations of the order, Vos and Steineke and WMC issued statements incorrectly asserting the administration had no plan.

On April 20, when the details of the plan were filled in, a joint statement from Vos and Senate Majority Leader Scott Fitzgerald (R-Juneau) declared that infections from COVID-19 “aren’t significantly increasing.” On that date, DHS reported that nearly 4,500 people had tested positive for the illness; nearly three weeks later, the total number of cases has more than doubled, to 9,215.

(That’s actually potentially good news. Epidemiologists look to the doubling of infection rates to gauge the severity of spread of an illness. If the three-week time lapse holds up as testing increases, it will show that the state has been successful at reining in the virus.)

What the plan does call for includes widely expanded testing and contact tracing, along with isolating people found to be infected so they don’t spread the virus to others; tracking the spread of the disease; expanded access to personal protective equipment (PPE); and ensuring adequate healthcare system capacity. Those are procedures that have been universally recommended by epidemiologists and public health practitioners nationwide.

The Republicans’ regional approach continued to stress the absence of cases in many parts of the state, ignoring that until recently testing has been reported to be more difficult to get.

“If you look at the data, we don’t have the issues that we have in some other areas of the state here in western Wisconsin,” said Rep. Treig Pronschinske (R-Mondovi) in Chippewa Falls. “I believe that’s because we’re responsible and we want to move forward and we’re safe.”

To bolster their case for a regional strategy, Republican lawmakers pointed to states including Washington, New York and Illinois as places under Democratic governors that have adopted such a plan.

They offered no descriptions of the details, however, and a review of those states’ plans suggests that while there are regional elements, they are, overall, at least as stringent as Wisconsin’s, with the sort of requirements for hospital capacity, testing and contact tracing that are built into Badger Bounce Back. Moreover, in some states, the plan descriptions indicate that some industries such as construction and supply-chain-related manufacturing have been almost completely shut down (which is not the case in Wisconsin), and even now might not be ready to open up.

Possibly the least apt comparison for the arguments that regional advocates are making is with Illinois. The soonest any part of the Land of Lincoln can move out of its current shut-down status is May 29, four days after Wisconsin’s current Safer at Home expiration.

Meanwhile, supporters of a regional reopening have still not addressed the question that public health practitioners have raised repeatedly, one illustrated by hotspots in meatpacking plants, where outbreaks have helped lift Brown County’s rate of infections per 100,000 residents to the highest in the state: How, without a more complete understanding of the spread of the virus even in rural areas through rigorous, widespread testing, is it possible to guard against flare-ups, especially ones made more likely as travel increases throughout the state?

In the most extreme example of misrepresentation about Safer at Home, a former Republican state representative and practicing physician repeatedly — and incorrectly — claimed at an Assembly committee hearing that hospitals were forbidden to offer elective procedures during Safer at Home. Hospitals that had voluntarily suspended almost all non-COVID-19-related care except in emergencies have now resumed broader activities, with no change in the order, which is silent on that subject.

At the same hearing, Wisconsin Economic Development Corp. CEO and Secretary-designee Missy Hughes walked through a series of agency initiatives to assist businesses who were struggling with having to shut down or slow down under the order. She also sketched out, as she has in previous media briefings with Evers and Palm, how businesses can begin preparing now to rearrange their work spaces to meet the necessary physical distancing rules that are likely to be in place for some time to help further control the spread of the illness.

Questions followed, including from Rep. Dan Knodl (R-Germantown), who tendentiously grilled her about the state’s Safer at Home order’s labeling of certain businesses as “non-essential” — not half an hour after Hughes had discussed her own dislike of the “essential/non-essential” categorization.

No one asked anything about the programs she had been discussing.