Elana Levine's "Her Story" looks into the history and gender politics of soap operas. 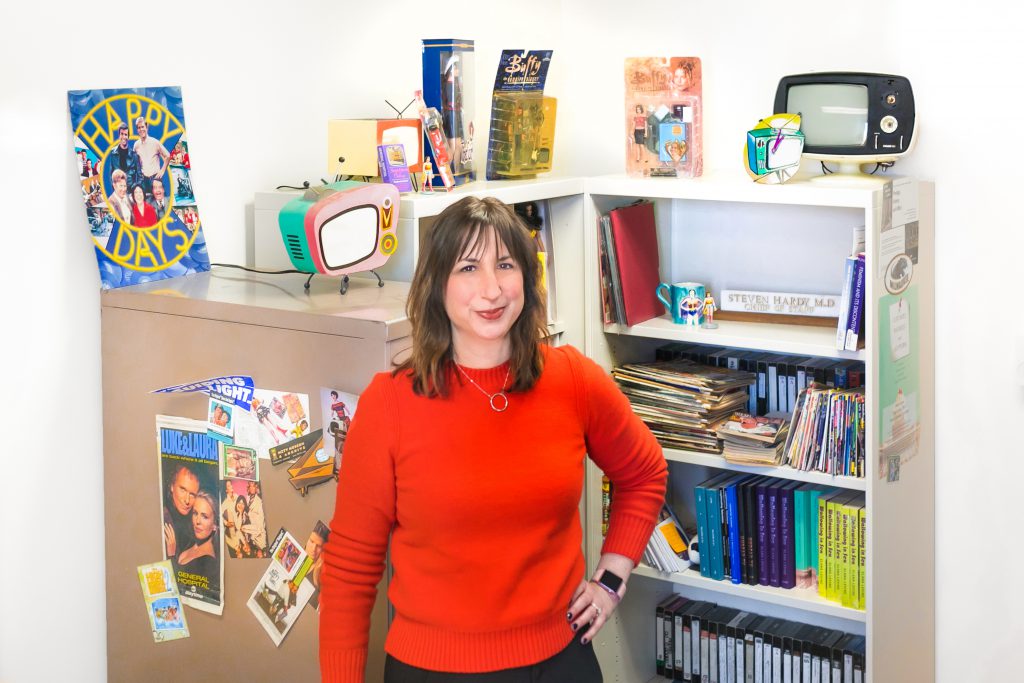 A University of Wisconsin-Milwaukee professor has published a new book detailing the cultural and economic significance of daytime television soap operas.

Elana Levine is a Media, Cinema, and Digital Studies professor in the Department of English at UWM, where she has been teaching since 2002. Her new book, titled “Her Stories”, takes an academic look at television soap operas, tracing the medium from its debut in 1949 to its decline in the 21st Century. The title of the book comes from Levine’s probing of the ways that soap operas have shaped our understandings of gender and femininity.

“My own research has always been on television, but I also study gender, race and sexuality and its link to identity,” Levine says. “So, my teaching is more oriented on the sides of gender and television and sometimes it intersects — there’s a lot of overlap.”

“Her Stories” was published in February through Duke University Press. Levine had been working on the 400-page book for about 12 years, finishing the writing portion by late 2018 before submitting it for editing and publishing. Although Levine kept a busy schedule between juggling the writing and research processes for the book, other small research projects and her teaching job, she was able to find additional time and resources thanks to two fellowships at the Center for 21st Century Studies.

“When I started, I wasn’t one-hundred percent sure what the focus was going to be — I knew it was going to be historical and about soap operas,” Levine says. “It goes all across TV history, so it took some time for me to figure out what materials were available.”

While watching soap operas as part of the research process might sound easy, the timeline spanned in Levine’s book provides so much television that Levine had to choose not only which episodes were worth watching, but which episodes were accessible to her. Thanks to the UW’s library system, Levine was able to utilize resources at UWM’s library as well as have resources from Madison shipped to Milwaukee. Eventually, Levine’s research led her to the focus of her book.

“I started to realize that there was a story to tell here that would arch over all of television history from the 1940’s and 50’s up to the present,” Levine says. “One of the things that led me to the focus of my book was in the late 2000’s, a number of daytime soap operas started to get canceled and there were four shows that were on for decades that got canceled between 2009 and 2012. It made me realize that there was a kind of an end to this story.”

While the book takes an academic approach to observing this timeline, Levine took extra measures to ensure that it was an accessible book for any reader.

“I really tried and hoped that it would be something that people who are fans of soap operas would be interested in and comfortable reading, so I tried to make the language accessible and readable and I feel like I’m able to speak to these two different audiences,” Levine says.

And even for someone who has consumed as much media as Levine has over the years of her studies, there were surprising finds along the way. For example, All My Children, a popular drama that debuted in 1970, often dealt with controversial storylines. In one episode, a character gets an abortion, which is talked about as the first legal abortion on television after Roe v. Wade was passed in 1973. Sources online often describe the episode as taking place that same year. However, Levine discovered some surprising facts after reading scripts from that episode.

“The story actually happened in 1971 before Roe v. Wade, and it was still a story about a legal abortion because before Roe v. Wade, different states had different laws,” Levine says. “Soap operas were telling stories about these important social stories way before anyone else. It told me something interesting about how soap operas work in terms of talking about social issues.”

Levine had originally planned on various press events for her new book, including one at at Boswell Books, but those have been postponed due to the COVID-19 pandemic. For those interested in purchasing the book, visit dukeupress.edu/her-stories. Paperback copies of the book cost $29.95 before shipping and taxes. For those who have been using this time indoors to catch up on their backlog of television shows, Levine’s book could open up some new insights into how you watch your favorite shows.