Two of six criteria have now been met. More work remains before state can reopen. 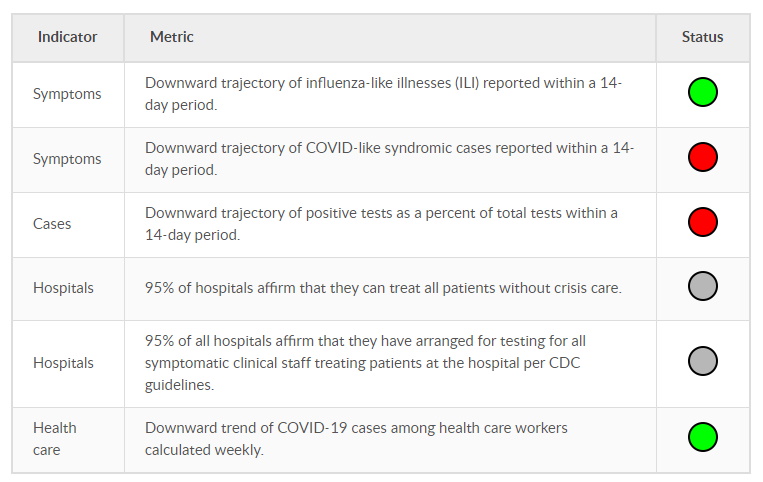 Badger Bounce Back plan performance as of May 5th. Image from the Department of Health Services.

Progress has been mixed on Governor Tony Evers‘ Badger Bounce Back plan to incrementally reopen Wisconsin.

The state’s dashboard shows that only two of the six benchmarks have been met. But that’s actually an improvement. The plan was first announced two weeks ago and until this week only three of the criteria were public.

Wisconsin is satisfying targets for a downward trend on individuals reporting influenza-like illnesses and for the number of COVID-19 cases among healthcare workers.

“Each of those are point-in-time measurements, generally over the past few weeks,” said Department of Health Services deputy secretary Julie Willems Van Dijk during a media briefing Tuesday regarding progress on meeting the six benchmarks.

The state does not have public data for two of the criteria, 95 percent of hospitals affirming they can treat all patients without crisis care and 95 percent of hospitals affirming they have arranged for testing for all symptomatic clinical staff treating patients at the hospital. The state says the data is being collected and will be available on Friday.

DHS reports that there is still not a downward trajectory of positive tests as a percentage of total tests. As Urban Milwaukee had reported in its daily COVID-19 update, the percentage is actually up over the past 14 days compared to the April average.

Nor is there a downward trajectory of COVID-like syndromic cases — cases where patients show some symptoms of the disease. In that category, DHS reports a downward trend of emergency department visits, but not large enough to be statistically significant.

And even if the four remaining criteria are met, the two others must continue to be satisfied.

The dashboard displays the six criteria with a red light, green light layout. “We hope that stays green,” said Willems Van Dijk of the number of COVID-19 cases among healthcare workers. A graph on the DHS website shows a clear downward trend on the measure, with the number of workers being cut in half from March 15th through April 26th, but data from April 19th through April 26th is listed as preliminary.

In announcing the bounce-back plan on April 20th, Evers also called for an adequate supply of personal protective equipment (PPE), testing to be expanded to over 12,000 tests per day and establishment of a statewide workforce of 1,000 contact tracers.

Progress has been made on PPE, but much more is needed. At least 42 hospitals in the state report having less than a seven-day supply of at least one PPE item, down from 67 on April 20th.

Testing capacity has increased, with the state reporting 51 labs across the state have the capacity to process 11,347 tests per day, up from 7,500 on April 20th. But the number of tests performed is still far below the capacity. The state set a new high Tuesday with 3,830 tests processed in the past 24 hours. Evers announced a plan Monday to execute an additional 10,000 tests per week by testing every resident and worker at long-term care facilities. Milwaukee residents are encouraged to call 211 to find a free testing site.

“The capacity has grown, but we have not seen as many people get tested as we would like to see,” said Mayor Tom Barrett in a county briefing Wednesday afternoon.

Contact tracing has been expanded, with the state having trained an additional 401 workers since the outbreak started and having made over 14,000 contacts. But state officials are warning that expanded testing will require they expand tracing even more.

A job posting is available on the state’s Wisc.jobs website. “We are very excited about our initial response to this posting. Over 1,000 people have applied,” said Willems Van Dijk. “Our goal is to follow-up on everyone who has tested positive with COVID-19 in 24 hours.”

She said Wisconsin is moving in the right direction. “I want Wisconsinites to know we are in a very enviable position across the United States. We are in the top five with access to testing,” said Willems Van Dijk. Comparing Wisconsin to South Korea, she said that the capacity is allowing Wisconsin to implement a broad variety of strategies beyond testing solely at hospitals including deploying the Wisconsin National Guard to perform outbreak testing at facilities with a surge in cases and operating community testing sites across the state.

Once criteria are met, Evers plans a phased reopening. Phase one of the reopening would include restaurants reopening, child care resuming and group meetings of up to 10 people. A second phase would allow bars to reopen and events of up to 50 people.