The Return of Brad Pfaff

By Melanie Conklin, Wisconsin Examiner - Apr 29th, 2020 11:27 am
Get a daily rundown of the top stories on Urban Milwaukee 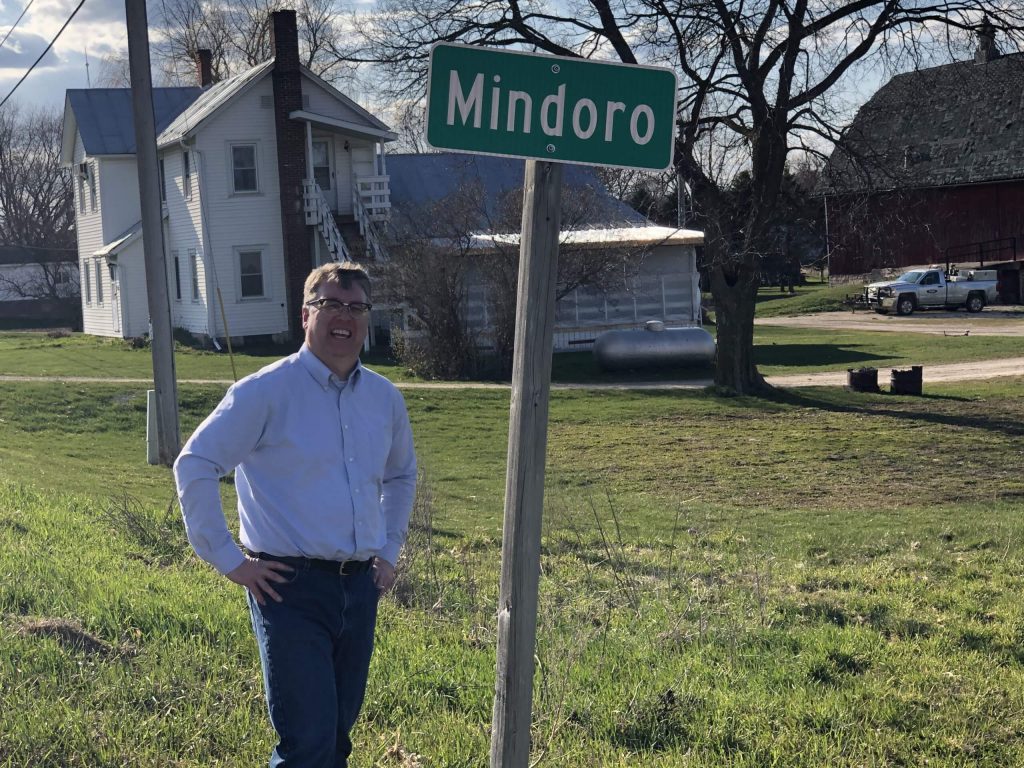 Brad Pfaff in Mindoro, the town nearest the farm where he grew up. Photo courtesy of Pfaff for Senate campaign.

The first thing that Brad Pfaff wants to do when Safer at Home restrictions are lifted in Wisconsin is to go to a fish fry.

Not just for the fish  — although he does claim he’s never tasted a bad fish fry — but to talk to people. Lots of people. This is coming from a guy who has been on the phone talking to people for hours a day, well before announcing on Monday that he is running in the La Crosse area to replace state Sen. Jennifer Shilling, the Democratic Senate leader who is stepping down after this term.

If you want to be a politician, that’s the right thing to say. With Pfaff, you get the feeling he just can’t help himself. He gets so excited and earnest while expressing his passion for farming, for the Driftless region, for hearing people’s stories and farmers’ struggles, that he gets ahead of his own words at times.

He exudes that same enthusiasm for his vision of a new type of politics.

“We need a change in the Wisconsin Legislature, we have to lead with what I call ‘western Wisconsin basic values.’ We need to pull together, help each other, not tear each other down,” says Pfaff, channeling the folksiness of Gov. Tony Evers combined with a cheerleading style reminiscent of former Gov. Tommy Thompson. “I always tried to remember what my mom taught me early on, ‘Brad you were given two ears and one mouth for a reason. Listen, twice as much as you speak.’”

“And so I’d get out there and we would just talk about various things like milk pricing, what more the state could do to assist land conservation efforts, what are we going to do to make sure that Wisconsin cheese stays the world’s preeminent brand. Then we would start talking about what’s happening on the farm and what their hopes and dreams are. We would just peel back — so quickly — any of any partisanship. And we never talked about [being] a Republican or Democrat … It was just the person, and it was just awesome.”

Pfaff brought that passion to his job as  a county board supervisor in his native western Wisconsin, and to working for Congressman Ron Kind and to heading the state’s Farm Service Agency in the U.S. Department of Agriculture during the Obama administration.

And he really brings it when he talks about traveling all across the state during his 10 months as Secretary-designee of the Department of Agriculture, Trade and Consumer Protection (DATCP).

Until last November, that is, when the Senate sent him packing, refusing to confirm him as DATCP secretary after a skirmish between Pfaff and Senate Majority Leader Scott Fitzgerald, as well as the Joint Finance Committee co-chairs, over their delay in releasing mental health funding for farmers which had been appropriated three months earlier in the state budget.

Now Pfaff, 52, is seeking to join the very body that terminated him from a job he previously described as his dream post. Former state Sen. Dan Kapanke, a Republican,  is running in what will be a rematch of a 2004 race in which Kapanke beat Pfaff. Kapanke lost to Shilling in a 2011 recall election. Now Shilling is leaving after serving for two decades in the two houses of the state Legislature.

Everyone — potentially even Shilling for quite awhile — thought she would be running for re-election. When she announced that she would be stepping down, Pfaff began talking with his family, including his wife (whom he met at a 4-H leaders luncheon in high school) and their two children. a daughter who is in high school and a son who is attending the UW-Madison.

His family members told him, “This is our home This is who we are. You know, we come together when times are tough and we try and tackle challenges and we do that as a family, so, you know, let’s go for it,” Pfaff says. “And so here we are. I’m ready to go. I’m optimistic. I’m excited. I absolutely, greatly enjoy people. And I absolutely cannot wait to see people in person again, because that’s the best part of all this — the people.”

Shilling endorsed Pfaff for the seat the same day that he announced his candidacy. “Amid the ongoing farm crisis, Brad has been a trusted and outspoken advocate for family farmers by urging action on mental health assistance, rural broadband access and sustainable land management practices,” Shilling said. “I’ve known Brad for over 30 years and can attest to his energy, enthusiasm, and commitment to western Wisconsin. … Brad has been deeply involved in our community and knows that the only way to move our state forward is by rolling up your sleeves and working together.”

It might seem awkward to join the very body — the state Senate — that fired him, but Pfaff says it was never about his job. His mindset was on what he and the DATCP team were hearing from farmers.

“I had traveled the state, I had listened. I had heard. I stood in dairy barns, I stood in milk plants, I was on Main Street and I was in diners, I was in feed mills. I listened to people: rural residents, family farmers, small business owners,” says Pfaff, barely stopping to take a breath. “You know, there’s tremendous emotional and financial stress taking place out here. They were experiencing at least five years of below-cost-of-production prices. I had heard firsthand from individuals who had their families on the farm since the family came to this country, you know, 100 years ago. And they didn’t know if they would make it. I heard from people saying that it was easier to talk to a bank then it is to talk to your own children about what’s happening here because there’s such pride and you want to make sure that you can keep this thing going.”

That sense of urgency, he says, pushed him to push the Legislature to release the mental-health funding in late fall.

He dances around commenting on how that particular showdown in the Senate impacted his decision to run for the Senate. Reflecting on that day, he says he knew what was coming and was already saying goodbye to his senior staff at DATCP and thanking his team for their work as Evers made his way to the Senate floor to witness the debate over his cabinet nominee.

“Sure I was disappointed,” reflects Pfaff. “But, you know, I also realized the fact that I did the job I was asked to do. And I think the thing that I was most disappointed [about] was that this was never about me. This was about what I was trying to do to help out people that pay the taxes, that plow the fields, that milk the cows, that serve on local school boards and serve on local councils — honest, hardworking people that just want to be able to take care of the family and contribute to the community. And instead it turned into another petty, partisan polarized fight that is unfortunately too common in our Wisconsin Legislature.”

Running in the time of the COVID-19 pandemic is also off-putting to some potential candidates, but Pfaff responds to the health crisis much as he did to the Senate confirmation battle — it’s another reason to run.

“This is a time when we should come together and should move beyond this partisan politics,” he says. “I think that all of us recognize that it’s important to keep people safe and healthy. We all value our businesses on Main Street, our workers — we want to make sure that we find a balance here that keeps people safe and healthy.”

“Then why can’t we work together on that?” he continues, answering his own question:  “Everything again, even this, moves into the partisan pettiness, finger pointing.”

Other issues on his mind include funding public schools adequately, investing in infrastructure, including roads, broadband, healthcare clinics and rural hospitals.

“And then, of course, you can never not talk about this area, the Driftless region, without talking about our unbelievable natural landscape, which is just amazing.”

Asked for a comment on the repeat match-up in the district that includes the counties of La Crosse, Vernon, Crawford and Monroe, Kapanke said via email:

“It has been my honor to represent the people of western Wisconsin in the state Senate. In this challenging time, the 2020 election is shaping up to be unlike any in our history. In the coming months I look forward to connecting with friends and neighbors throughout the 32nd Senate district, in every way we are able, to discuss the issues we face and the ideas they have to keep Wisconsin moving forward.”