The epidemic has not slowed down, and neither has treatment.

By Isiah Holmes, Wisconsin Examiner - Apr 9th, 2020 11:13 am
Get a daily rundown of the top stories on Urban Milwaukee 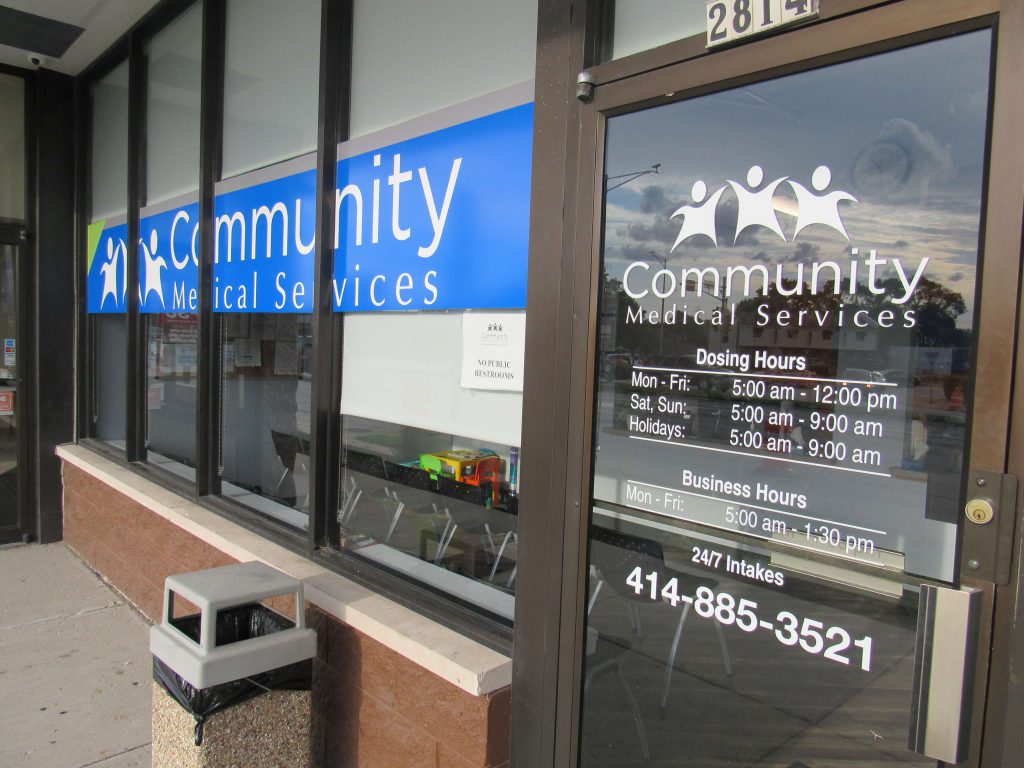 Despite much of society taking a collective pause to stall the spread of COVID-19, some things don’t change. Or rather, they can’t change. The opioid epidemic, for instance, hasn’t frozen in place, nor has the demand for treatment. In fact, Community Medical Services (CMS), Wisconsin’s first 24-hour medication-assisted treatment facility in West Allis and Fond du Lac, has seen an uptick in new patients.

Medication-assisted treatment gives recovering users access to medication like methadone and suboxone, which help control cravings for opioids and opiates, as well as withdrawal symptoms. CMS also provides access to therapy and other services which can be key stepping stones for a persons recovery. It arrived as the Badger State’s first 24 hour center, a consistency CMS is maintaining through the pandemic.

“We’re continuing to intake people and continuing to get people into treatment,” John Koch, CMS director of community engagement, told Wisconsin Examiner. “Because even though this is a really hard time, the fact is that the opioid epidemic is killing a lot of people, too, and we need to have access to treatment.” As efforts to contain the pandemic continue, Koch and his colleagues have noticed that addiction treatment is also becoming harder to access. “We have not slowed that down,” said Koch.

Still, CMS has had to adjust how the facility operates to remain in compliance with recommendations from the Centers for Disease Control and Prevention (CDC) related to COVID-19. Lesley Wimmer, government relations director with CMS, says that the treatment center has tried to remain flexible in how patients receive their medications and are checked on. “Say it was someone who was coming in three times a week previous and now they’re only coming in once a week, we’re still calling them multiple times a week. At least three, checking in, seeing how they’re going, still doing counseling sessions.”

It’s important to maintain a consistent support network, even when patients may be wary of going outside or meeting in person. For CMS, video calls and tele-medicine practices are key to balancing providing quality care with limiting close interaction.

Some patients, however, still have to come in regularly due to the nature of their particular treatment plan. Those undergoing methadone treatment, for example, still need to come in to receive their medication. CMS has adjusted by spreading out the chairs in the lobby, and creating an app to allow patients to check in and wait in their cars until it’s time to come inside the facility. A back entrance with access to isolated areas is also available for patients who may be at a high risk of complications due to COVID-19.

Still, anxieties run high both for people in treatment, and those considering kicking their habits. Koch says that for many struggling with drug addiction, the idea that their medication or counseling might become unavailable is “scary to them.” Even before adjustments were made in operations, one of the first steps for CMS was “affirming with them that’s not going to happen, and we’re still here for you.”

With some treatment programs beginning to not accept new intakes, Koch feels closing the door “is exactly backwards of what needs to happen.” A variety of things could happen in the coming weeks, particularly for users on the street. From a shortage of illicit substances to a lack of money whether from work, people’s direct generosity, or anywhere else. “People are really going to want to get into help,” says Koch, “and we need to make sure that our arms are open and welcoming.”

It’s something Amanda Rodriguez, CMS clinic manager in West Allis, is seeing happen in real time. Before the pandemic, Rodriguez says her clinic would see about five to eight admissions a day.

“Now we’re doing no matter what, at least 12 admissions a day,” she told Wisconsin Examiner, “so we’ve doubled admissions.” A number of things could be influencing this sharp uptick. “Maybe they’re too scared to interact with the folks who they’re getting their drugs from,” explains Rodriguez. Maybe, she adds, some people are thinking, “it’s that end-of-the-world moment, let me try to change my life and do better before it ends.”

Another question during the pandemic has been how to take care of the homeless, many of whom may struggle with addiction. Due to the relationship CMS has with Milwaukee County, many people who struggle with homelessness who come into the clinic had already been set up with some form of housing prior to COVID-19. Nevertheless, Rodriguez explained that recent closures of residential facilities created some unexpected issues. “So we have more women that we’re trying to scramble around and find a place to live,” she says.

Clinics must also think proactively about routine strategies like staff sharing, and the potential of an entire staff being quarantined because of a new employee coming in after being exposed. Much like Personal Protective Equipment, medical professionals are increasingly becoming a valued and scarce resource. Wimmer says as hospitals continue to seek additional manpower, clinic doctors might leave or split time to help hospitals staff up.

Keeping healthcare providers, particularly older doctors, safe and healthy, is another issue. That’s where tele-medicine comes in, and the flexibility it provides healthcare providers in both communicating with patients and supplementing staffing shortages. “We will always have staff on site,” assures Wimmer. “If we typically would have five counselors on-site during a normal day, we might now only have two or three, with another two or three working remotely.”

Making sure that treatment options are available may become a more pressing issue as the months go on. In 2019, Milwaukee County experienced a record number of over 400 overdose deaths, more than half involving fentanyl. If the current rate of overdoses continues, the county could see over 600 overdoses by the time 2020 ends.

The Wisconsin Department of Health Services, alongside Public Health Madison, issued a public health alert due to an increase in Dane County overdoses. Lasting from March 29- April 4, the alert was activated due to 11 likely overdoses reported to local emergency rooms. “Currently,” reads a release on the alert, “it is unknown as to what is driving this recent change in activity. It is possible that the combination of illicit street drugs in our community has changed.”

Rodriguez feels that everyone who comes in for treatment during these times may be a potential life saved. Increases or decreases in overdoses may also be very localized. As a CMS clinic manager in West Allis, Rodriguez gets regular reports from the Medical Examiners Office detailing daily overdose deaths.

“I used to get them every single day, now I’m getting them every other day or every third day,” she explained. “With the same amount of people on them, so the amount of people aren’t changing on the report, but at least it’s not every single day anymore.” People staying at home are also encouraging recovering users to seek online treatment options and support, from communities to podcasts. It’s for those reason that, in a way, Rodriguez feels the pandemic may actually have some unexpected benefits for addiction treatment.