By Isiah Holmes, Wisconsin Examiner - Apr 8th, 2020 04:07 pm
Get a daily rundown of the top stories on Urban Milwaukee 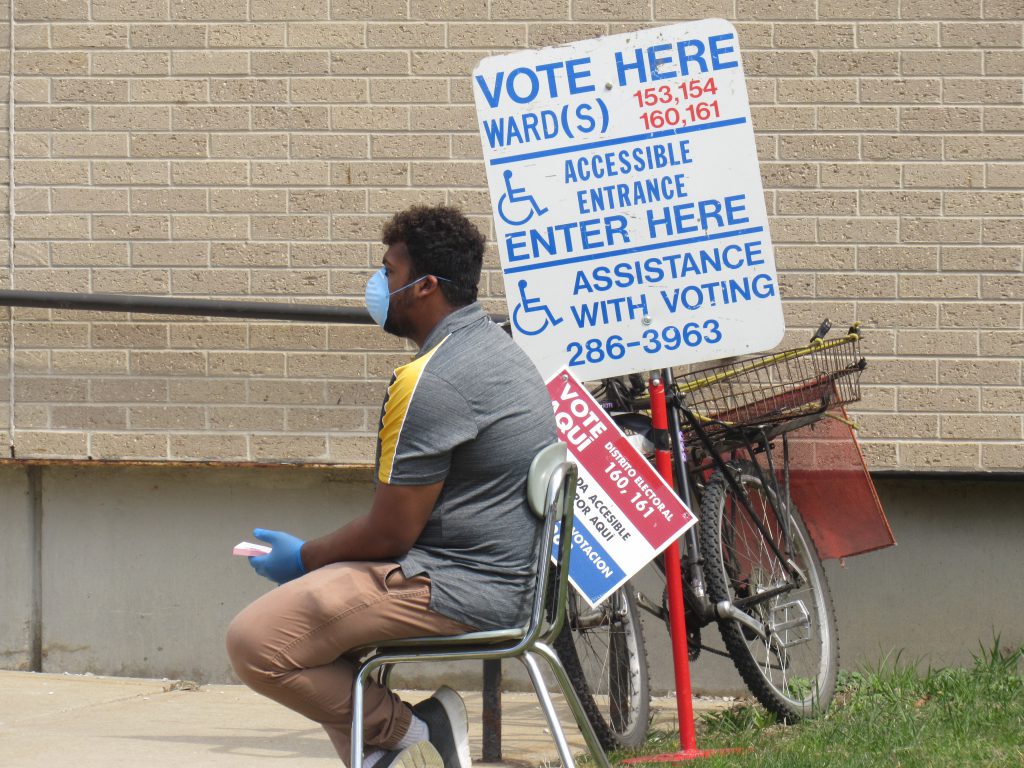 Election day in Milwaukee offered sobering sights at the five out of 180 polling sites that remained open in the city of almost 600,000. Lines stretched for several blocks, filled with people young and old exercising their right to vote in the middle of a pandemic. Voters waited into the night, even as the 8 p.m. deadline came and went, particularly in some of Milwaukee’s lower-income communities. They confronted what some feared would amount to one of the most potent examples of voter suppression in recent memory.

“The frustration is there,” said Gab Taylor, a community activist in the Sherman Park neighborhood. Still, she wasn’t deterred from voting. “It wasn’t as excruciating as it looked because the lines are down the street, down the block,” she said. Taylor was in line for a little over an hour at her polling place, Washington High School, but some others weren’t so lucky. Reports of waits at Riverside High School approaching two or three hours circulated online, and there were equally long wait times at other sites.

Washington High School’s long lines, like Riverside, lasted into the evening hours as the sun crept down and street lights illuminated the streets. All but one of the handful of polling sites that opened on Tuesday are in neighborhoods with dense clusters of COVID-19 cases. Washington High School, however, is one of two sites located in the predominately African American Northside, one of the hardest hit regions of the county for the virus. Still, people came out in droves to vote, including the elderly and others more vulnerable to complications from COVID-19.

“Everybody’s energy is like, ‘We got to do what we got to do,’” Taylor told Wisconsin Examiner. Although long lines lasted all day, Taylor said it was “terrible,” in the morning. “Just from reports on social media and people I know personally that came and just left,” said Taylor. Those who remained withstood the elements including nearly 80 degree temperatures, followed by a brief downpour of rain. Discarded gloves and other more common litter filled the gutters and alleyways surrounding Washington High School.

“I’m convincing people to still go out regardless of all the barriers we have against us,” said Taylor. “If we don’t come out, it’s going to be worse for our city.” For the community activist and organizer who, in addition to voting, also passed out gloves and masks for people, the decision was simple. “If you went to Walmart, if you went to the store, visited a friend, then you can come out and vote. This is something that you can risk it for, if you went to Walmart to get tissue.” 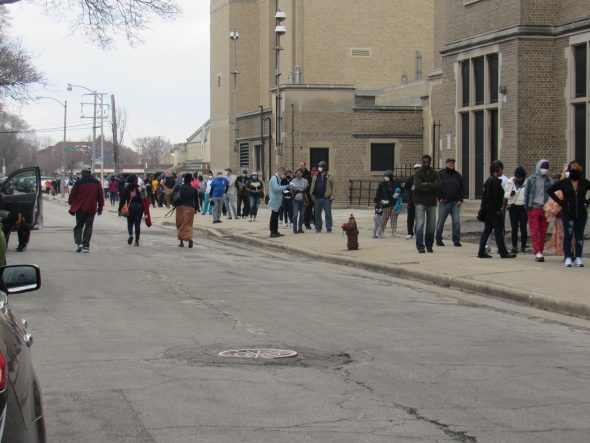 All in all Taylor wasn’t surprised or moved by the possibility that the pandemic was being used as a form of voter suppression. Minority communities in the historically segregated city are not naive about the systemic inequity in their communities. The pandemic simply offered a fresh set of perspectives from which to view the issue.

Michael Wagner, a professor of journalism and mass communication at UW-Madison, feels that it’s an unfortunately clear illustration. Wagner was part of conducting a panel study of Wisconsin voters in 2018 which analyzed voting trends in African American, Hispanic and poor communities. The group of UW-Madison professors studied issues including which groups are more likely to utilize absentee ballots and the impact that has on their communities’ representation, to which groups may wait longer and travel farther to vote.

For example, “we found that black voters had longer commutes,” Wagner told Wisconsin Examiner. “Their commute time to the voting booth took about 25% longer than voters who were not black.” Wagner says the study also found that absentee ballots and other measures meant to increase voter turnout can actually be ineffective in lower income communities. More often, the study found that absentee voters were, “wealthier and more educated voters, regardless of racial background.”

The research group, which also included UW-Madison professors Lewis Friedland, Dhavan Shah, Katherine J. Cramer, along with Jordan Foley and Ceri Hughes wrote an article describing their research in The Washington Post on Tuesday, titled ‘Wisconsin is scheduled to vote today. How will the pandemic affect turnout?’

“The coronavirus pandemic is an extraordinary public health crisis, and we can’t know how it will affect voting,” they wrote. “But our team’s research on the 2018 midterm elections suggests that the groups that usually face more barriers to voting — in particular, poor people and racial and ethnic minorities — do not tend to benefit from early and absentee voting.”

Although voting absentee was pushed by Gov. Tony Evers for weeks leading up to the election, Wagner’s findings from 2018 mirror what activists are warning of in 2020. Due to the crisis situation created by COVID-19, communicating changes in the voting process to new or infrequent voters proved difficult. It’s why several groups joined forces to call for a postponed election, and even filed lawsuits. Ultimately these, and efforts by Evers to call a special session and extend the voting period, died at the hands of the GOP.

The controversy grabbed the attention of the nation, and the ire of some in the legislature. Rep. David Bowen (D-Milwaukee), who has recovered from COVID-19, aided voters by serving as an absentee ballot witness. A slew of absentee ballots received by the city’s election commission lacked a witness signature, and were sent back or may not be counted.

“Many Wisconsin voters who were self-isolating while fighting off COVID-19 faced the threat of voter disenfranchisement by no fault of their own,” said Bowen. “With so many awful decisions being made by so-called political ‘leaders,’ it was time that someone showed the people of Wisconsin that they were willing to stand up and do the right thing,” he said, speaking of his decision to serve as a witness for quarantined absentee voters.

Rep. LaKeshia Myers (D-Milwaukee) shared similar feelings. “Your mother shouldn’t have to choose her life or her ballot,” Myers tweeted. “This is NOT what democracy looks like.” Perhaps it’s not what democracy looks like, but it’s certainly what disadvantaged communities in Wisconsin are used to. For voter-suppression researchers like Wagner, the writing was scribbled all over the wall. He confesses that watching his research play out in real time is “heartbreaking.”

A variety of things gets in the way of voting, even absentee, for disadvantaged communities. Some may not have access to fast internet, or any internet at all. Others, including older voters, may be unfamiliar with the various websites and portals needed to register. The requirement of a photo ID is yet another hurdle for some registering absentee, or having a cell phone capable of taking a picture. “If you’re finding yourself at an economic disadvantage, maybe you don’t have enough money for a car,” explained Wagner. “So you have to take the bus, or maybe you have to walk. Already there are barriers that get in the way of trying to take advantage of policies designed to make voting easier.”

With the world watching Wisconsin’s election play out during a pandemic, voter suppression tactics in the state are being laid bare. It’s not the fault of disadvantaged communities that they’re targeted for suppression.

“I think it’s hard for people who have it to understand what it might be like for others who might not have the transportation, resources, who might not be immediately trusted when they show up to vote, who are voting in precincts that have less resources, all those things, I think, matter,” said Wagner. “It’s probably worth all of us thinking about when we decide what we think the rules ought to be for who gets to vote, and how to vote.”