By Laurel White, Wisconsin Public Radio - Apr 4th, 2020 10:10 am
Get a daily rundown of the top stories on Urban Milwaukee 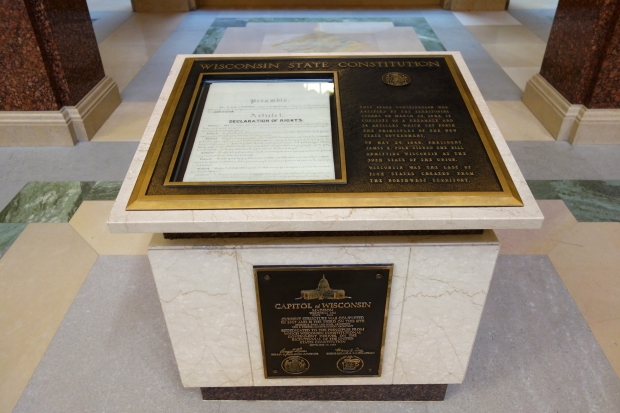 When Wisconsin voters participate in the upcoming April election, whether it’s in-person or by mail, they’ll be asked to do something that doesn’t happen very often: weigh in on a proposed change to the state constitution.

The proposed constitutional amendment, which has to do with crime victims’ rights, is the result of a nationwide lobbying effort and has spurred strong opinions on either side of the issue.

The change, named Marsy’s Law after the sister of its financial backer, billionaire Henry Nicholas, would add more rights for crime victims in the state constitution.

Supporters say victims deserve to have constitutional protections, as those accused of committing crimes against them do.

Opponents argue increasing victims’ rights in this way could violate the constitutional rights of the accused. They say individuals accused of crimes need constitutional protection against abuse of power by the state, while victims’ protections against their perpetrators can be ensured in state laws.

During an appearance Monday on WPR’s “The Morning Show,” Veronica Figueroa Velez, executive director of UNIDOS, a domestic violence agency in Madison, said approving the amendment would “level the playing field” between victims and the accused.

“We just want victims and survivors of crime to be able to have a better stance in court, to be able to defend themselves,” she said. “Marsy’s Law is not intended to allow the victims to have greater or lower (rights), it’s about having equal rights for victims.”

Other supporters argue the changes would increase victims’ faith in the criminal justice system and empower more people, including victims of domestic violence, to come forward to report crimes.

In the same “The Morning Show” program, Asma Kadri Keeler, a staff attorney with the American Civil Liberties Union of Wisconsin (ACLU), argued Wisconsin’s existing laws and constitutional protections for victims are good and don’t need to be changed.

“Wisconsin’s current victims’ rights law offers each and every one of the protections that Marsy’s Law is proposing,” Kadri Keeler said.

Opponents also argue some of the language in the proposal both over-promises to victims and is too vague, causing more work within the state criminal justice system and potentially opening up the state to costly lawsuits as courts attempt to discern what exactly was intended when some rights were promised.

Some have also pointed out Marsy’s Law has been used in other states to inappropriately obscure the identity of police officers involved in shootings, as officers argue they were victims of harassment or violence in the incidents.

Lobbying efforts in support of the proposal have been robust, including more than $380,000 spent on lobbying lawmakers and nearly $200,000 in online advertisements in 2019, according to Wisconsin Ethics Commission reports.

Groups opposed to the change include the ACLU. Supporters include a number of law enforcement groups, like the Wisconsin Chiefs of Police Association.

The language that will appear on voters’ ballots will look like this:

The language on the ballot was approved by lawmakers as an appropriate summary of the changes, but the changes themselves are much more detailed. According to an analysis by the Legislature’s nonpartisan research office, the amendment calls for the addition of 17 specific rights for crime victims in the constitution.

According to the analysis, the amendment also defines who a victim is. Under the proposal, a victim would be:

The amendment also authorizes the victim “to enforce his or her rights in any circuit court or before any other authority of competent jurisdiction, and direct the courts to act promptly with respect to such an action and to afford a remedy for the violation of any right of the victim.”

Opposition to the proposal came mostly from Democrats.

In 2017, one Assembly Republican, Rep. Rob Stafsholt, of New Richmond, joined Democrats in voting against the proposal. No Republicans voted against the plan in the Senate.

In 2019, Republican Reps. Treig Pronschinske, of Mondovi, and Jeremy Thiesfeldt, of Fond du Lac, joined Stafsholt and Democrats in voting against. In the Senate, Sen. Duey Stroebel, R-Saukville, voted against.

Something going on the ballot as a statewide referendum doesn’t guarantee its passage. In 2018, voters rejected a proposed amendment that would have eliminated the state treasurer’s office.