Is Dan Kelly Good for Democracy? 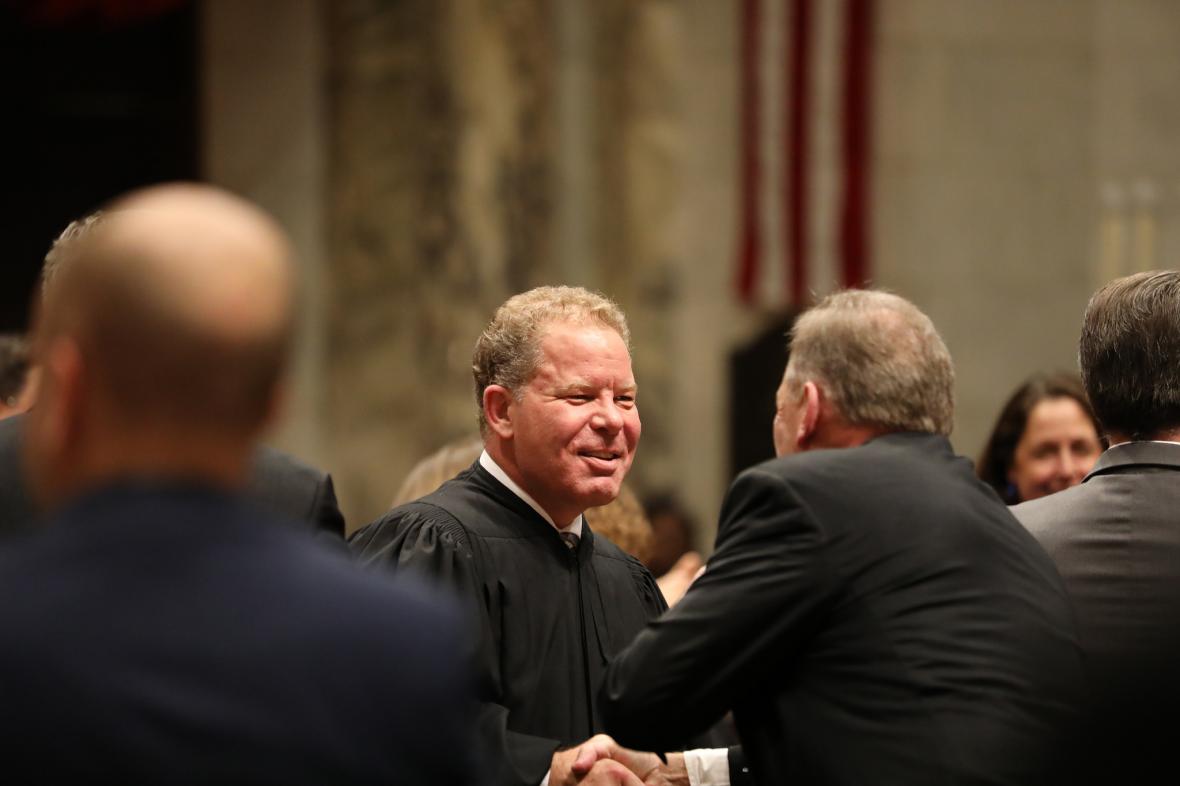 People around the globe look to their court system to protect their freedoms and expand democracy. Unfortunately, democracy has been in retreat in recent years, including in countries like the United States, which can still legitimately claim to be democracies. And as it turns out, democracy may be at stake in the race of Wisconsin Supreme Court between Daniel Kelly and Jill Karofsky.

Every year, Freedom House issues a report summarizing the health of democracy worldwide. The latest version, titled Freedom in the world 2020: A Leaderless Struggle for Democracy documents that, overall, democracy has been losing ground over the past 14 years. Freedom House is a U.S. government-funded non-profit that conducts research and advocacy on democracy, political freedom and human rights.

The chart below shows the count of countries whose scores improved compared to the previous year (blue line) with the number moving down (red line). Starting with 2007, the number of countries losing has exceeded the number gaining freedom. This gloomy picture results partly from totalitarian countries becoming more so. It also reflects free countries that are becoming less so. 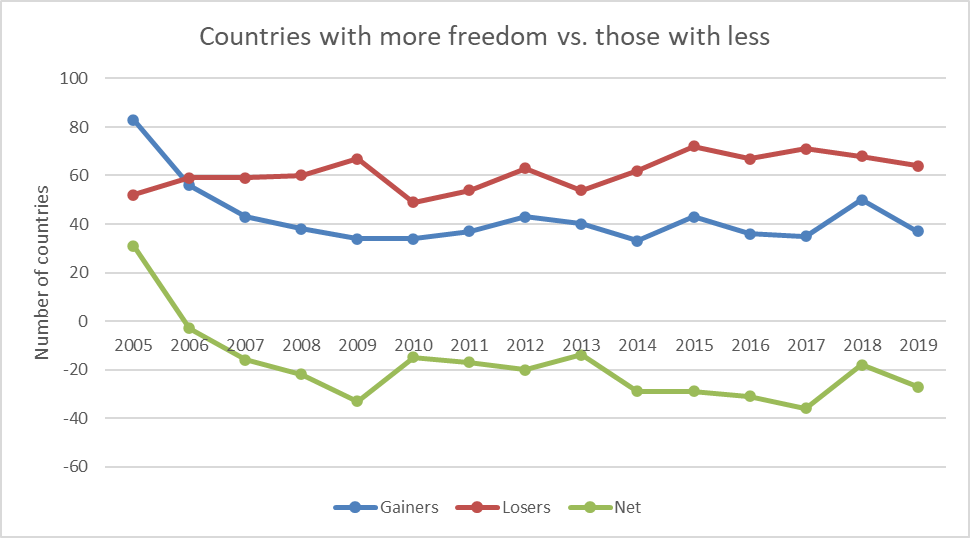 Countries with more freedom vs. those with less

In developing the ratings, Freedom House uses some 25 indicators. On each, countries are awarded 0 to 4 points, so the maximum possible score is 100. Only 6 countries got perfect scores: Sweden, Norway, Switzerland, Luxemburg, San Marino and Iceland.

The worst possible score is −4, which results if a country scores 0 for all 25 indicators, and −4 for ethnic cleansing. North Korea gets the lowest score (0), followed by Turkmenistan (2), Tibet (5), Sudan and Chechnya (both 6), Libya and Myanmar (both 7), and Western Sahara, Syria, Cuba and Saudi Arabia (all 8).

Freedom House uses 25 indicators to assess the state of democracy in each nation. Those indicators fall into two groups: political rights and civil liberties. The first set describes how citizens control their government– electoral processes, political pluralism and participation, and government functioning. The second encompasses political rights, including freedom of expression and belief, associational and organizational rights, rule of law, and personal autonomy and individual rights.

Unfortunately, the United States is one of the countries that has seen a decline in freedom in recent years, as the next chart shows. Reacting to the latest Freedom House report earlier this month, the Washington Post columnist Max Boot conceded that the United States is still a long way from a dictatorship, but argued that the erosion of U.S. democracy is a warning sign. “With a score of 86, we are now ranked behind countries such as Greece, Slovakia, Italy and Mauritius.” 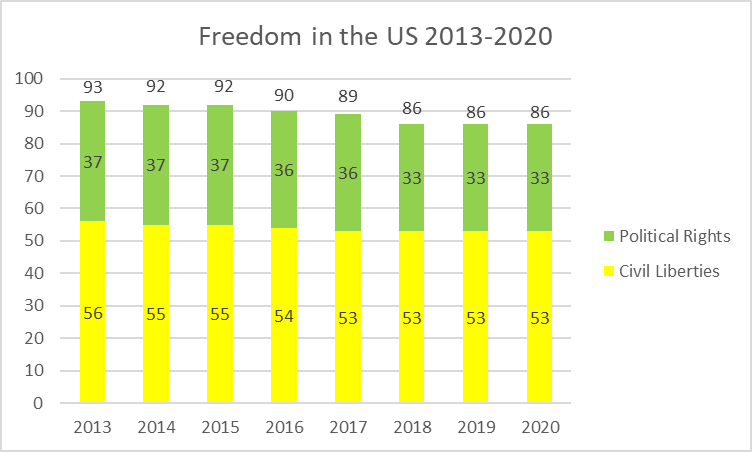 Boot points out that when democracies become authoritarian, there is seldom a sharp point at which the leader announces that the former democracy is now a dictatorship. Instead, there is a gradual erosion of Democratic rights, as can be seen in Hungary, the first European Union country to be classified as only “Partly Free,” with Poland in hot pursuit under the leadership of the ironically named “Law and Justice” party.

In addition to its global report, Freedom House issues separate reports on each country. Its report on the United States helps spell out the factors going into this decline.

In assessing the condition of political rights, Freedom House asks, “Are the electoral laws and framework fair, and are they implemented impartially by the relevant election management bodies?” (Question A3). In response, the United States report raises a number of concerns.

One concern is gerrymandering in which legislative districts “are crafted to maximize the advantage of the party in power in a given state.” It refers to alarm “at the growing strategic and technical sophistication of partisan efforts to control redistricting processes and redraw maps.” Freedom House notes that while the Supreme Court refused to address the problem, “in the 2018 elections, voters in five states approved ballot measures that placed the redistricting process under the control of nonpartisan entities.”

Wisconsin, of course, is notorious for its gerrymander, which allows Republicans to control the Legislature and control a majority of US House seats even while losing a majority of the vote. In 2018, Tony Evers won 50.6 percent of the two-party vote statewide but lost 63 of the 99 Assembly districts (63.6 percent).

Prior to joining the state Supreme Court, Kelly joined the legal team defending the Republicans’ Wisconsin gerrymander. While he claims to have put his politics aside when he joined the court, at a minimum this shows that he has no moral objection to one party using gerrymandering to entrench itself in power.

Kelly, along with his colleague Rebecca Bradley, adheres to the theory, popular among some on the right, that the so-called “administrative state” is unconstitutional. This theory seems to be the basis for the assertion by Robin Vos, Scott Fitzgerald, and other Republican legislators that Governor Evers’ nonpartisan redistricting commission is illegal.

A second concern expressed by Freedom House is that “some states have adopted strict voter-identification laws whose documentation requirements can disproportionately limit participation by poor, elderly, or racial minority voters; people with disabilities; and university students.” These measures “tend to affect demographic groups that are seen as likely to support Democratic candidates, and they are typically adopted by Republican state lawmakers.”

Given his past political activity, as well as the enthusiastic support from almost every Republican group in the state (as well as President Trump), there is little reason to expect that Kelly could grow into a advocate for the voting rights of disenfranchised eligible voters.

A second question asks, “Is there a realistic opportunity for the opposition to increase its support or gain power through elections?” (Question B2). Freedom House reports that “power changes hands regularly” in the United States. However, the 2018 lame duck session was an exception to the norm that power be handed over intact:

“In an unusual development following the 2018 midterms, outgoing Republican-led legislatures in Michigan and Wisconsin attempted to strip powers from executive offices that had just been captured by Democrats,” the report notes. “The efforts largely failed in Michigan, due in part to vetoes by the outgoing Republican governor, but the relevant measures were adopted in Wisconsin, where Democrats became governor and attorney general. The Republican-controlled legislature in North Carolina had pioneered such moves after a Democrat won the governorship in 2016.”

A third question the Freedom House report asks, “Are the people’s political choices free from domination by forces that are external to the political sphere, or by political forces that employ extrapolitical means?” (Question B3).

“While there have been a number of attempts to restrict the role of money in political campaigning, most have been thwarted or watered down as a result of political opposition, lobbying by interest groups, and court decisions that protect political donations as a form of free speech,” the report noted.

The Wisconsin Supreme Court played a major role in further opening the gates to spending by outside groups. Over the years, the US Supreme Court has thoroughly gutted campaign laws so that outside groups can spend as much money as they want so long as they follow two rules: (1) they don’t explicitly tell people how to vote and (2) they don’t coordinate with the candidate or campaign. The rationale for the second restriction is that without it the limits on donations to candidates would be meaningless. Both the federal and Wisconsin campaign rules included the restriction on coordination.

During its investigation of illegal activities by people associated with the Scott Walker’s Milwaukee County Executive office, the Milwaukee DA office found evidence of coordination between Walker and outside groups. This triggered a new, statewide investigation. Rather than allow this investigation to reach a conclusion, the Wisconsin Supreme Court seized control and declared unconstitutional the restriction on coordination. Under this decision, candidates for Wisconsin office are free to coordinate with outside groups.

The evidence is compelling that the court majority believed that Walker had broken Wisconsin law. Otherwise there would have been no need to declare the law unconstitutional. Just let the investigation run its course. The case also presented conflict-of-interest problems. Apparently, there was also evidence that two of the justices—including the author of the decision—also coordinated with outside interests.

If he had been on the court at the time of the decision, would Justice Kelly have joined it? The late Justice Patrick Crooks, a conservative, did refuse to join conservative colleagues. Instead, he wrote a devastating dissent, dissecting the majority’s errors. But Kelly is no independent thinker. It is safe to say that he would have joined. It is also notable that Justices Patience Roggensack and Annette Ziegler are the remaining members of the four who shut down the investigation and are close allies of Kelly.

I have learned to distrust the false humility of those who claim they follow the Constitution. The message they try to give is: “I am the humble vessel through which the founders speak.” What they are really claiming is: “I understand the true intentions of the founders and anyone who disagrees is wrong.”

One thought on “Data Wonk: Is Dan Kelly Good for Democracy?”