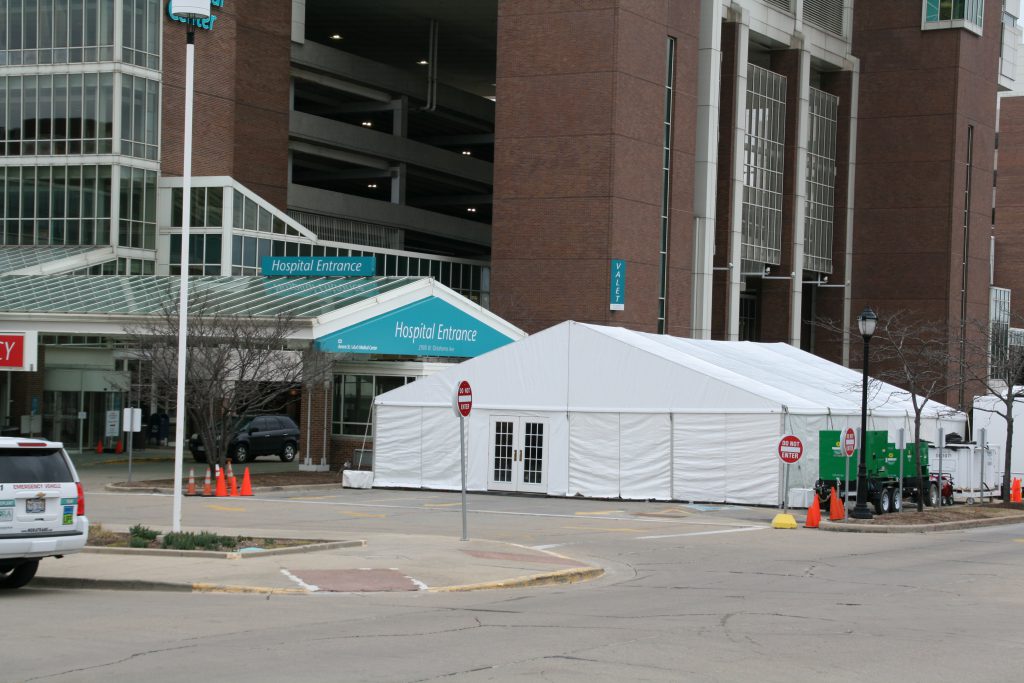 Milwaukee County, like the rest of the state and much of the country, is preparing and bracing for a coming surge in COVID-19 cases.

Mayor Tom Barrett said it is no longer a matter of if, but when, the surge in cases will happen.

Leaders in healthcare and government expect the surge to hit Wisconsin sometime towards the end of April and they are working to increase healthcare capacity across the state, in the hope the system isn’t overwhelmed.

The projected timing of the surge is largely predicated on a report produced by the University of Washington, which predicted the hospitalization peak will be April 26th in Wisconsin and that the death toll will increase 50 percent by then, to 1,309.

“Although models such as these are inherently broad and limited in their accuracy and their ability to predict the future,” said Dr. Ben Weston, director of medical services for Milwaukee County, “they nonetheless provide some level of insight on where we might be headed based on other countries and other viruses from the past.”

Because of the infectiousness of asymptomatic cases and the incubation period of the virus, Barrett said, “We are sitting right now with hundreds, if not, thousands of people who have this virus and they’re symptoms will start to show in the next couple weeks.”

Local governments including the City of Milwaukee and the county and local hospitals are working to increase capacity at existing healthcare facilities, as well as working to identify potential venues for field hospitals during the surge.

Hospitals are busy converting existing hospital beds to ICU beds, which allow for more critical care, and inventorying ventilators available for patient care, Weston said. Andrea Palm, secretary-designee for the state Department of Health Services recently said there are 1,215 ventilators in Wisconsin. This is nearly double what the state was previously thought to have.

Weston said hospitals are already doing a good job increasing their capacity. Still, the county’s Unified Emergency Operation Center is collaborating with the state, local hospitals and the Army Corps of Engineers to identify additional buildings that can quickly be converted to a healthcare facility to ensure there is enough capacity for the coming surge.

On top of ICU beds and regular hospital beds, they are preparing locations to serve as isolation centers. Urban Milwaukee reported Tuesday that a Super 8 Motel at 5253 S. Howell Ave. is being set up by the state as an isolation center. And Clare Hall, formerly used by the Archdiocese of Milwaukee to house nuns, will now shelter and isolate vulnerable homeless individuals as well as homeless people that have cases of COVID-19.

Healthcare systems and first responders are rationing personal protective equipment so that they don’t run out during the surge. And, healthcare workers on the frontlines of the pandemic are increasingly concerned about what they are likely to face. Weston, who works in an emergency department, confirmed this. “They’re concerned for… the surge that we predict and all these models predict will come.”

To help, the public needs to continue taking social distancing seriously. If not more so. Said County Executive Chris Abele:  “Our ability to manage, and healthcare workers’ ability to manage this surge is directly impacted by how seriously and diligently everybody takes staying at home and social isolation.”

Ann Christiansen, director of the North Shore Health Department, said since social distancing measures have gone into place, the number of people that confirmed COVID-19 victims have been in contact with appears to be shrinking. “That’s not the end of this story,” Christiansen warned. But it does show that social distancing works.