Why the 1918 Flu Pandemic Was So Huge

An estimated 50 to 100 million people lost their lives. 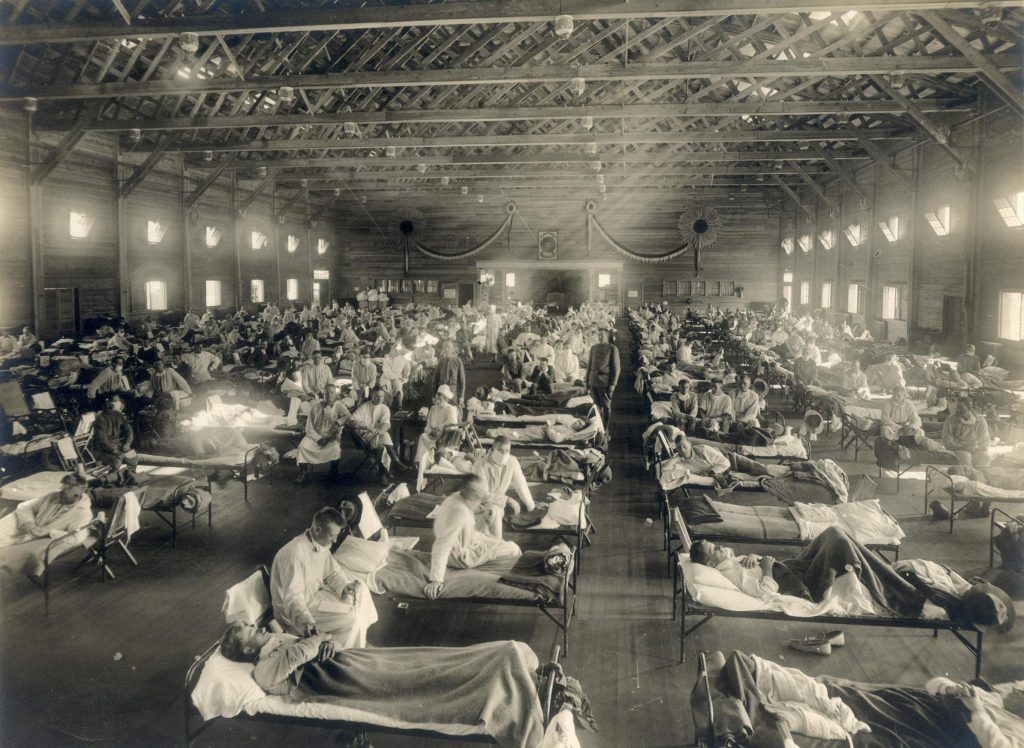 When a new and dangerous respiratory disease started racing around the globe in early 2020, it had been just over a century since humankind endured the 1918 influenza pandemic. While that wasn’t the last time the world saw such a widespread outbreak — there were flu pandemics in 1957-58, 1968 and the 2009 H1N1 ordeal most recently — the scale of the World War I-era disaster looms large in both the history and science of communicable disease.

The emergent disease is called COVID-19, and caused by a novel coronavirus, a type of virus that includes those responsible for the SARS and MERS outbreaks in 2003 and 2012, respectively. To many people, it may seem hard to distinguish from the strains of seasonal influenza that hit in any given year. The illnesses share many symptoms, including cough, fever, sore throat⁠ — and pneumonia in serious cases. However, they’re quite different. 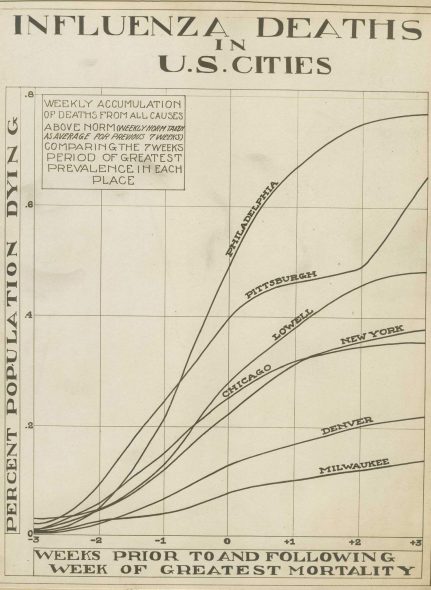 A chart of influenza deaths in the 1918-19 flu pandemic shows weekly accumulation of deaths from all causes above the norm for Philadelphia, Pittsburgh, Lowell, Chicago, New York, Denver and Milwaukee National Museum of Health and Medicine (public domain).

While coronaviruses are a relatively recent discovery, first identified in humans in the 1960s, influenza as a malady has been observed by humans for more than 500 years. And while virology is a relatively new discipline, barely more than a century old, research into past influenza pandemics helps scientists understand how future outbreaks can impact society.

The worst and most notable flu outbreak in modern times is the 1918 influenza pandemic, responsible for millions of deaths worldwide. Peter Shult, director of the Communicable Disease Division at the Wisconsin State Laboratory of Hygiene, discussed the factors that contribute to pandemics during an Oct. 10, 2018 presentation at the Wednesday Nite @ the Lab lecture series on the University of Wisconsin-Madison campus,and recorded for PBS Wisconsin’s University Place.

“The great influenza pandemic of 1918-1919 … ranks as one of the biggest and arguably most impactful of global health crises in human history,” Shult said.

The 1918 influenza pandemic was unique in its significant mortality rates among otherwise healthy adults, whereas most fatal influenza cases typically appear among the very young or very old. Shult noted that pneumonia was a prevalent comorbidity during the pandemic, with around 15-20% of those infected developing a bacterial infection after the flu virus had weakened their respiratory system. All told, Shult said an estimated 50-100 million people perished in the pandemic.

A pandemic is not defined solely by the pathogen; rather, Shult described a pandemic as the global outbreak of a disease that spreads rapidly and produces significant social and economic impacts.

Not every strain of influenza is capable of causing a pandemic; the virus is divided into sub-types A, B, C and D, with the first two having the most significant impact on human health. While both types A and B are associated with seasonal flu outbreaks, only type A has the potential to reach pandemic status. Flu viruses can change through what are called antigenic drift and antigenic shift, and it’s this capacity that makes them more dangerous.

Influenza A is particularly well-suited to produce novel strains with high rates of transmission because its surface proteins, hemagglutinin and neuraminidase, aid the virus’s ability to latch onto and infect new cells. These are the H and the N that appear, respectively, in the taxonomy of flu strains, such as the 2009 H1N1 swine flu pandemic — the 1918 pandemic was likewise caused by an H1N1 virus. Influenza A also has an RNA-based genome, which allows it to frequently mutate, similar to the rapid changes that made HIV difficult to treat.

“The real hallmark of influenza is its changeability,” Shult said. “One of the mechanisms leads to pandemic influenza. The other, much more subtle mechanism, leads to the seasonal epidemics that we experience each year.”

Although pandemics impact a large portion of the world, seasonal strains of the flu can be more deadly. Thomas Haupt, influenza surveillance coordinator at the Wisconsin Department of Health Services, discussed the yearly challenges posed by the seasonal flu in the 2018 lecture.

While the 2009 H1N1 outbreak was classified as a pandemic, the impact of the 2017-18 flu season in the United States surpassed it by almost every measure, Haupt said. Even without pandemic status, the 2017-18 seasonal flu sickened enough people to overwhelm hospital capacities in some areas.

The numbers of severe cases seen in 2017-18 lends perspective to the discussion around precautions taken to slow the rapid, pervasive spread of COVID-19.

“Almost a thousand people wound up in ICU [in 2018],” Haupt said. “Of that, like 273 people were required to get mechanical ventilation. Very serious year. Much higher numbers in every category. Broke every record. And not a record we wanted to break.”

What Made The Great Flu Pandemic Of 1918 So Momentous was originally published on WisContext which produced the article in a partnership between Wisconsin Public Radio and PBS Wisconsin.