Rep’s ‘Eclipsed’ Is Harrowing Yet Funny

A brutal look at Liberian War from women’s viewpoint is unique and often powerful. 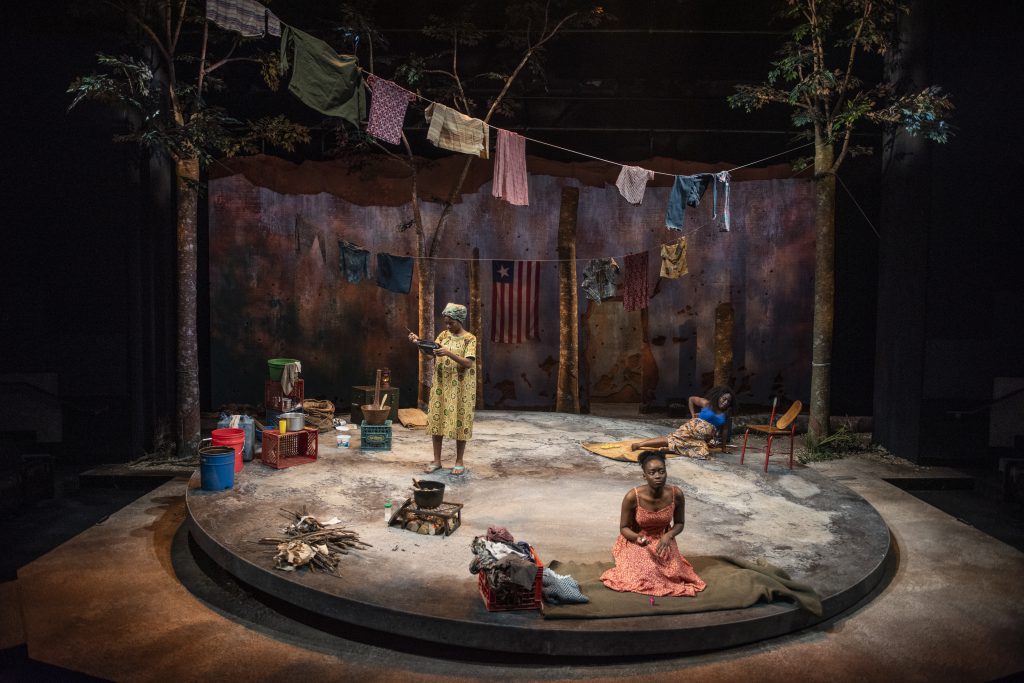 Even in a Liberian warlord’s squalid jungle camp of child warriors, raped women and constant atrocities, there is a pecking order: Wife No. 1 runs the domestic side of his hut, almost a surrogate mother; Wife No. 2 has escaped sexual service to one by becoming an aggressive killer and paramour of many soldiers; Wife No. 3 is the breeder material girl and Wife No. 4 is the 15-year-old test tube of everyone’s desires.

So it lines up in Eclipsed through March 29 at the Milwaukee Rep’s Quadracci Powerhouse, a harrowing compelling way to take American audiences inside the horrors of the Liberian War of the early 2000s, a yet unresolved conflict between democracy and corruption that had some sense of community and success back then through a women’s peace movement. The struggle as portrayed in this 2016 Broadway play was not just for women, but for all Liberians to forgive themselves as both victims of carnage and perpetrators. The other, deeper struggle is to imagine a life without war since you have known nothing else. The play in fact leaves some of the characters dangling at the edge of the precipice of choice – kill or try peace? Submit to brutes or fly free?

A noted TV and film actress (though I think she wants to be better known in history as a playwright), Danai Gurira cleverly uses American culture as comic touchstones though the play is a serious examination. But there is much laughter in how these Liberian women discuss an Eddie Murphy movie or fragments of a Bill Clinton book on Wife No. 2 (as they interpret Monica Lewinsky).

The bluntness of the dialogue is noteworthy. The women line up like dutiful robots to serve their master, they wash the stench of him off and go back to work, but on their own they squabble about the future, snatch at each other’s possessions and long to remember their birth identities rather than their current No. 1 to No. 4 military labels. Their sense of morality is daily called into question by the little moments that veer them from bestial behavior to family instincts.

The journey is not in a straight line, nor are the performances. There is sometimes the feeling of abrupt jump cuts. Director May Adrales generally brings precise confrontations and flowing movement, but she is also determined not to bend an inch on the demanding dialect inflections, which some in the cast carry off better than others and several rely on too much.

In an effort not to let a moment of conflict escape audience involvement, the cast generally stomps around a bit too hard, but in such dynamic ways that the storytelling never flags.

It’s more demonstrative acting than psychological continuity, each sequence standing alone as a confrontational moment before the play skips ahead to a quite different encounter. Loyalties and insights shift, but not enough attention is paid to when and how.

Sola Thompson as the vain constantly complaining No. 3 is clearly the comic foil of the story – fussing with her wigs and hoarding goods, but she neatly turns that expectation of humor around in the last act, becoming touching and sympathetic.

Ashleigh Awusie has a slinky bellicose manner as threatening No. 2, gun ready to shoot, sneer on her lips, her head always tilted as if she were spoiling for a fight, a characterization I found too obvious.

Jacqueline Nwabueze as No. 1 must be the most bossy and most complaining, carrying off both extremes with considerable skill as well as startling us with her anguish when the war ends.

The showy role belongs to Wife No. 4 who moves from studious girl protected by all during her first brutalization, then frightening as an aggressive soldier herself, resulting in a powerful monologue about becoming both a victim and a victimizer. Matty Sangare grows into the part – indeed I suspect that the company will generally grow with more performances because this is a difficult piece for the actors to find the right balance.

Nancy Moricette also pops in and out, first as almost a TV pitchwoman for peace and then as a somewhat more mystifying mother searching for her own daughter. She seems a fine actress but her role is a primary example of a characterization that doesn’t hang together.

The technical elements (set by Collette Pollard, costumes by Kara Harmon, lighting Annie Wiegand) blend amazingly well – mats, clothing and food scattered around, tall trees that frame the action, clotheslines that disappear to become a battlefield. You can feel as well as see the texture of the events. Fan Zhang’s sound design is wonderfully rhythmic. 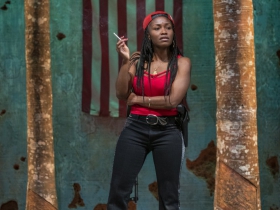 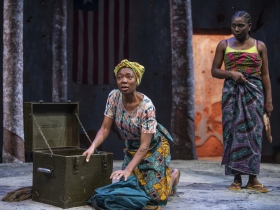 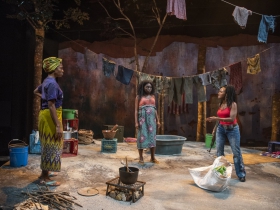 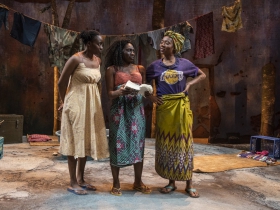 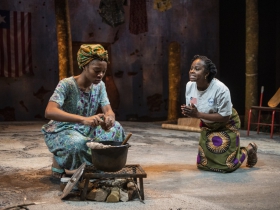 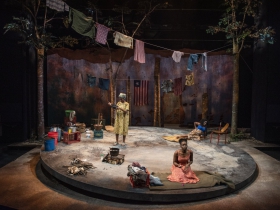