The Man Who Made Milwaukee

Fur trader Solomon Juneau arrived here in 1818 and saw the potential of Milwaukee. 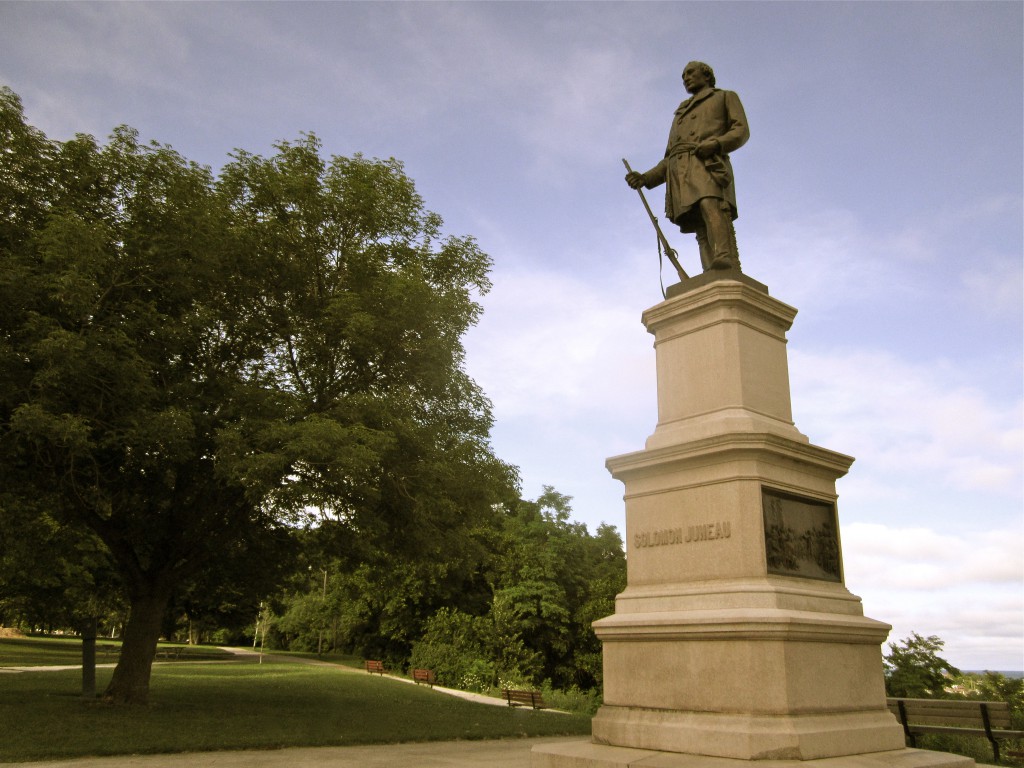 Solomon Juneau stands on the shore of Lake Michigan and looks across the city he established. A fur trader turned city founder, Juneau was also a friend to the Menomonee Indians, the city’s first mayor, and the father of a dozen children. Photo by Carl Swanson.

One recent day in Milwaukee’s Juneau Park, a strolling couple paused to look at an imposing statue. Reading the name on the pedestal, one asked, “Who’s Solomon Juneau?”

The short answer is he was a fur trader who turned a cabin in the wilderness into a thriving city. He developed the downtown and the East Side. He donated land and materials for the first courthouse. He was Milwaukee’s first postmaster, its first village president and, when the city was incorporated, its first mayor.

Juneau made a fortune and lost practically everything. He made many friends and kept them all. The pallbearers in his funeral procession included four chiefs of the Menomonee Nation. 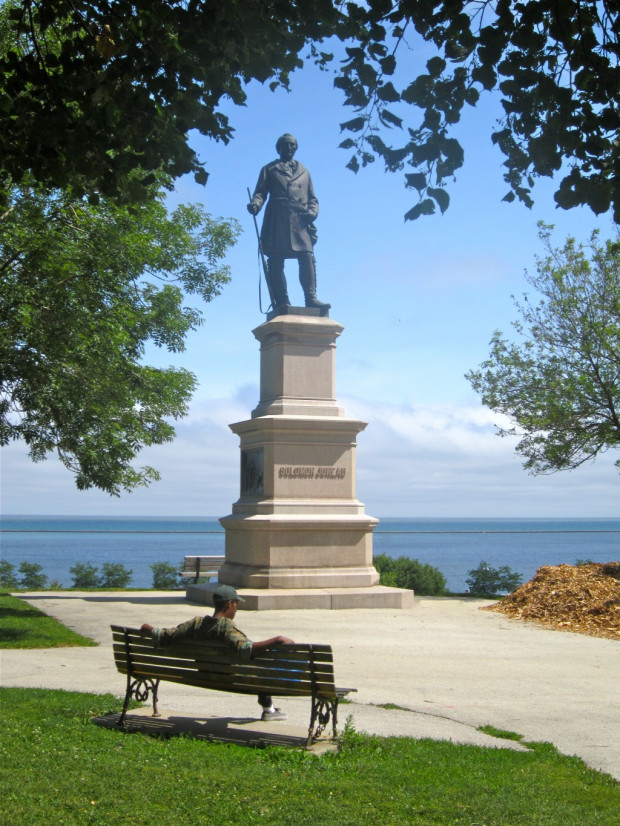 Contemporaries describe him as more than six feet tall, broad-shouldered, with gray eyes and long curly black hair. He had worked as a voyageur in his youth, finding his way to Mackinac, where he was hired in 1816 by fur trader Jacques Vieau, who conducted an extensive business from his headquarters at Green Bay, including a trading post at Milwaukee. In 1818, Juneau arrived in Milwaukee as Vieau’s representative. He also married his employer’s eldest daughter, Josette. She was seventeen at the time, and Juneau was ten years older. The couple had a least twelve children.

The granddaughter of a Menomonee chief, Josette’s many acts of kindness made her a much-loved figure among the settlement’s Native Americans. For example, she kept a barrel of flour and a barrel of sugar outside her cabin door. Those in need of food but too shy to ask could simply help themselves. Fluent in several Indian dialects, Josette rarely spoke English—French was the primary language in the Juneau household.

The Juneaus were not the first white settlers in Milwaukee, nor was Jacques Vieau, who founded his trading post near the Menomonee River in what is today Mitchell Park. Jean Nicollet passed through around 1639, Father Père Jacques Marquette paid a brief visit in 1674 and explorer René-Robert Cavelier, Sieur de La Salle, dropped by on his way south to Fort Crevecoeur (Illinois) in 1679. Others, including a wandering blacksmith named Jean Baptiste Mirandeau, stayed in the area for a few months or a few years.

A visitor in 1809, nine years before Juneau’s arrival, met Vieau, Mirandeau, one or two other French families and several hired men. A British census in 1817, a year before Juneau’s arrival, counted three hundred Native Americans in the area, primarily the Menomonee, who claimed the northern part of the future city as their territory, and the Potawatomie, who claimed the southern end. There were also Sacs, Foxes, Chippewas, Ottawas and Winnebagos.

Juneau himself probably wasn’t a permanent resident at first. He likely spent his summers elsewhere, turning in the furs he purchased over the winter and restocking his trade goods. Unlike the other early Europeans, Juneau recognized Milwaukee’s potential. With the backing of a business partner from Green Bay, Morgan Martin, Juneau purchased 130 acres north of today’s Wisconsin Avenue and east of the Milwaukee River in 1835 and began selling lots.

Juneau believed the place where the rivers met Lake Michigan would become a great city—and he wasn’t the only one. About the time Juneau was buying land on the East Side, Byron Kilbourn was developing Kilbourn Town on the west side of the Milwaukee River and Colonel George Walker was staking a claim south of downtown that would become Walker’s Point. Much of the city’s early history is marked by the not-so-friendly rivalry between these settlements. 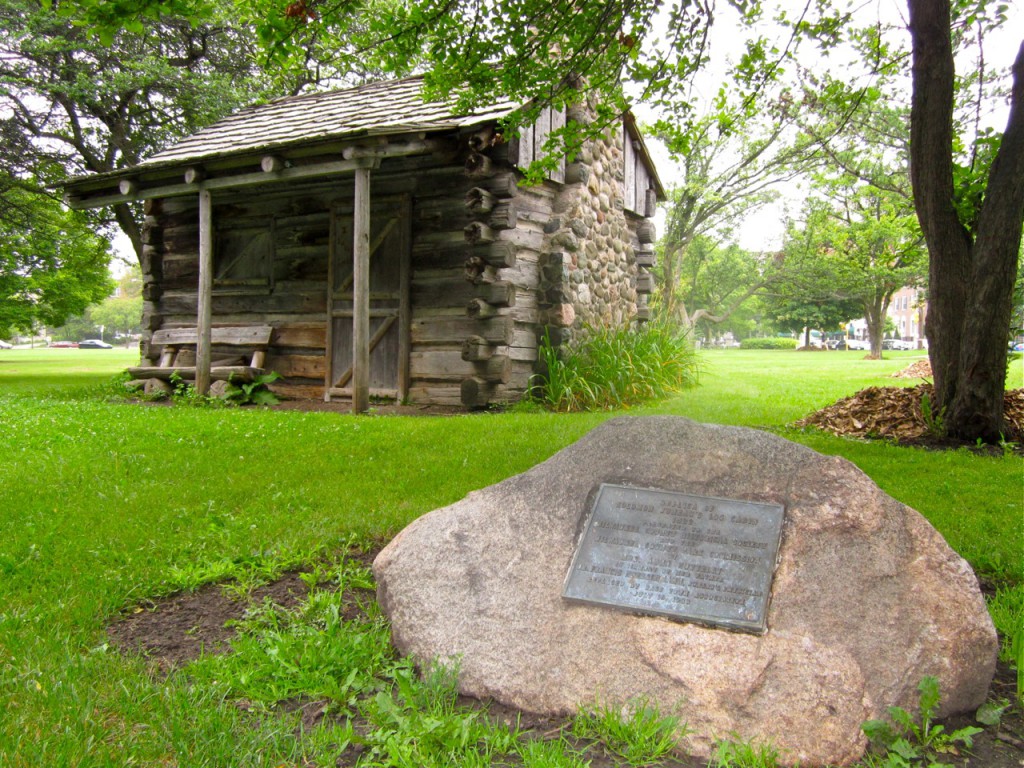 A replica of Juneau’s original cabin was added to his namesake park in the 1940s. Photo by Rachel Swanson.

Juneau served a single term as mayor, stepping down in 1847. By then, the wilderness of just a decade before was a bustling community of twelve thousand, and Juneau had lost much of his fortune in a financial downturn.

“Sturdy honesty was an inseparable part of the man. His peaceful dealings with the Indians, in which written contracts were never employed, broken promises unknown, and every bargain carried out to the letter, stood out in striking contrast to the scheming methods resorted to by some of the young Anglo-Saxons, his contemporaries, who had been reared in an atmosphere of ‘culture’ and ‘morality.’ Fair dealings had won wealth for Juneau, but the sharp practices of his contemporaries, it is said, rendered him poor again.”

After leaving office, he divided his time between Milwaukee and Theresa, a village he founded forty miles north of Milwaukee and named for his mother.

In 1855, Josette Juneau, who had been ill for some time, died at age fifty-seven. Pioneer settler Uriel B. Smith wrote this memory of Josette: “My child, Milwaukee Smith, was born October 10, 1835. She was the first white child born in Milwaukee, and Mrs. Juneau was present at her birth, and attended upon my wife in such a kind and motherly manner as to win the love and esteem of my wife as well as myself.

“Mrs. Juneau was also an attendant and watcher at the death bed of my wife some two years after.…For such services rendered to my wife during her sickness, I offered ample remuneration, which was immediately declined—she saying to me, “Such services were due all, and, that too, without consideration.”

“Such incidents can never be forgotten. I trust that Milwaukee today has her equal—I know it has not her superior.”

According to the winter 1957-58 issue of the Wisconsin Magazine of History, Juneau set off to visit the Menomonee in northern Wisconsin a year after Josette’s death. A tribal gathering was taking place and Juneau planned to do a little trading and catch up with old friends. On arriving at Keshena, Wisconsin, he became ill with symptoms resembling appendicitis. His condition rapidly worsened.

After receiving last rites from a Catholic priest, Juneau remarked to a friend, “It is hard to die here. I had hoped to lay my bones in Milwaukee.” Then, folding his hands and with a peaceful expression on his face, he said his final words, “I come to join you, my wife.” Juneau died on November 14, 1856.

And you ask me for his message. Read it in a life’s work well accomplished. – C.A.A McGee, Solomon Juneau’s grandson

Grieving tribal members arranged one of the most impressive funerals in the state’s history. With a priest leading the way, Juneau’s casket was carried by ten pallbearers, including Chief Oshkosh and three other Native American chiefs, while tribal members—about seven hundred—marched silently behind in orderly rows.

He was initially laid to rest in a grave atop a hill behind the Menomonee council house. When Juneau’s children arrived to take his body back to Milwaukee, the Menomonees escorted the remains as far as Shawano. On returning, they planted an evergreen tree in Juneau’s open grave. His spirit, they said, would forever remain with the tribe.

When Juneau’s body reached Milwaukee, a funeral was held at St. John’s Cathedral, and he was buried in the Old Cemetery. Following the purchase of the land that became Calvary Cemetery on the west side, Juneau’s remains were moved again. In 1946, the Milwaukee Common Council commissioned a monument, which stands near the cemetery entrance.

“Solomon Laurent Juneau was a man of rare personality,” wrote granddaughter Isabella Fox in 1916. “While of a jovial temperament, he never for a moment lost his natural dignity; of a kind and benevolent nature, he was the friend and confidant of all.” 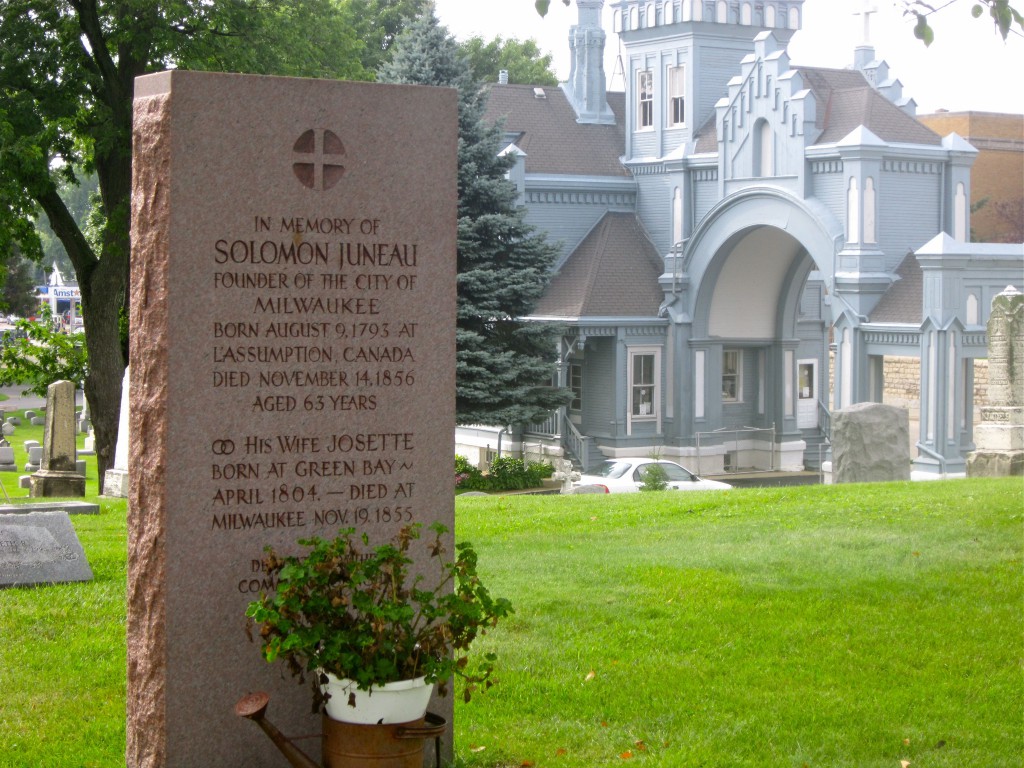 In 1946, the Milwaukee Common Council commissioned this memorial. Photo by Carl Swanson.