By Melanie Conklin, Wisconsin Examiner - Mar 5th, 2020 01:51 pm
Get a daily rundown of the top stories on Urban Milwaukee 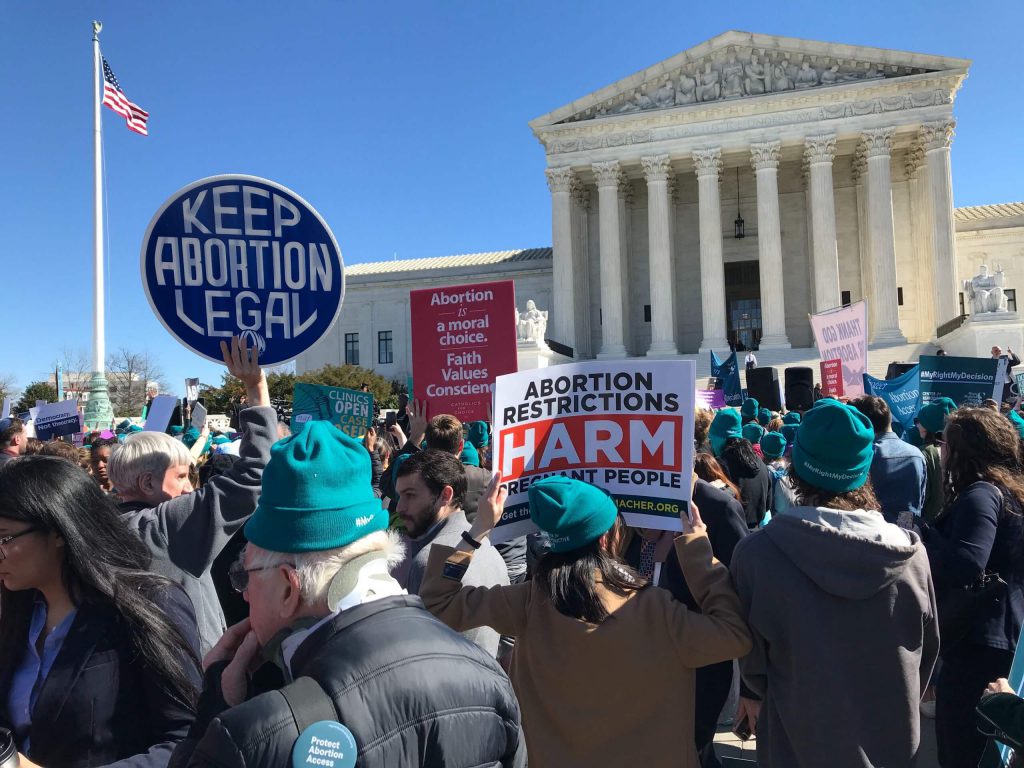 The June Medical Services LLC v. Russo case, that came before the Supreme Court of the United States (SCOTUS) for oral arguments on Wednesday, originated in Louisiana.

If that law sounds familiar to Wisconsinites — it should be.

The contested Louisiana law mirrors a Wisconsin law passed in 2013 under former Gov. Scott Walker that requires any physicians who perform abortions to have admitting privileges at a local hospital. Critics warned such laws would severely hamper access to the point of closing many clinics. Wisconsin has four abortion clinics, and the law would have likely shut down two of them.

Louisiana’s June Medical Services case could have even broader ramifications — to the point of effectively overturning Roe v. Wade.

“We are closely watching June Medical Services v. Russo because the Court’s decision may affect Roe v. Wade and have a direct impact on abortion access in Wisconsin,” says Sara Finger, founder & executive director of the Wisconsin Alliance for Women’s Health. (WAWH)

Planned Parenthood of Wisconsin fought the legality of the Wisconsin restriction, successfully getting implementation blocked in court. In 2015, the Seventh Circuit Court of Appeals ruled that the Wisconsin admitting-privilege law created an “undue burden” on women seeking abortion. In fact, it was Judge Richard Posner, a conservative jurist appointed by Ronald Reagan who cast the decisive vote in favor of women’s abortion access.

Abortion care advocates were further bolstered in 2016 when the U.S. Supreme Court heard a nearly identical case originating in Texas on the admitting-privilege law. In that case — Whole Woman’s Health v. Hellerstedt — it ruled Texas could not place restrictions on abortion services without providing evidence-based proof of medical benefits that justify the restrictions and hurdles. At the same time the Court refused to take up Wisconsin’s law, leaving the appellate ruling in place.

The fact that four years later the Supreme Court is taking up June Medical Services raises concerns that the two justices appointed by President Donald Trump, Neil Gorsuch and Brett Kavanaugh, are seeking to overturn precedent.

“The Supreme Court had a majority decision that very clearly said these types of laws unduly burdened women’s access to healthcare while not providing any sort of meaningful health benefit to women accessing the care” says Mike Murray, Planned Parenthood Advocates of Wisconsin’s executive director. “Usually when the Supreme Court sets that clear of a precedent on that similar of a case of law over the past few years, the Supreme Court does not re-hear litigation about an identical law.”

Finger labeled the case “an unusual revisit by the Court of the constitutionality of a state law regarding abortion practices, with conservative justices appointed by President Trump now sitting on the Court.”

A different decision, notes Finger, could have a major impact on Wisconsin. A ruling is expected in June.

Wisconsin law: Abortion is a felony

Finger’s Wisconsin Alliance for Women’s Health lays out three potential results that could come from the Louisiana case.

Currently Roe v. Wade prevents enforcement of a 171-year-old law Wisconsin law that made it a felony to provide an abortion. The law has no exception for rape, incest or the health of the woman. Only if she were about to die, explains WWHA, could a woman legally have an abortion.

“If Roe v. Wade is overturned, then abortions become banned in Wisconsin, since we have an archaic 1849 law still on the books that makes it a crime for a physician to perform an abortion,” says Finger.

It’s up to the Legislature

Last June, Democratic Gov. Tony Evers vetoed four anti-abortion bills sent to him by the Republican-led Legislature, drawing criticism from the bills’ sponsors. “Governor Evers has once again made clear that he believes protecting babies in Wisconsin simply isn’t a productive use of his time,” said Assembly Majority Leader Jim Steineke (R-Kaukauna).

Planned Parenthood’s Murray says his group’s focus in Wisconsin is on turning to legislators to take action to overturn the 1849 law and other restrictive laws.

“We will be highlighting the significance and the importance and the urgency for state lawmakers to start focusing on what they can do to ensure that women have access to the care that they need,” he says. “Right now WIsconsin has over 20 state laws that restrict access to abortion care that have a significant impact on women’s ability to access the care that they need. The majority of them are not based on evidence or medical best practices.”

Democratic legislators have proposed a variety of measures.

First is the “RESPECT Access to Care” bill. The text states that “every woman has the fundamental right to choose to obtain a safe and legal abortion. Under the bill, the state may prohibit a woman from obtaining an abortion after viability unless her life or health is endangered. Also under the bill, a law or rule of this state that restricts a woman’s access to abortion is unenforceable if the law or rule does not confer any legitimate health benefit.”

The bill would also give women the right to seek damages from any state or local official who attempts to deny them access. It also repeals six other elements of current law, including elimination of a ban on state insurance covering abortions, mandatory ultrasounds and criminal penalties for doctors performing abortions.

“Time and time again, Republican legislators in our state have inserted themselves into the exam room,” said Taylor. “This package of bills will put these personal healthcare decisions back where they should be – between a woman and her doctor.”