39 Artists. Not a Barn in Sight 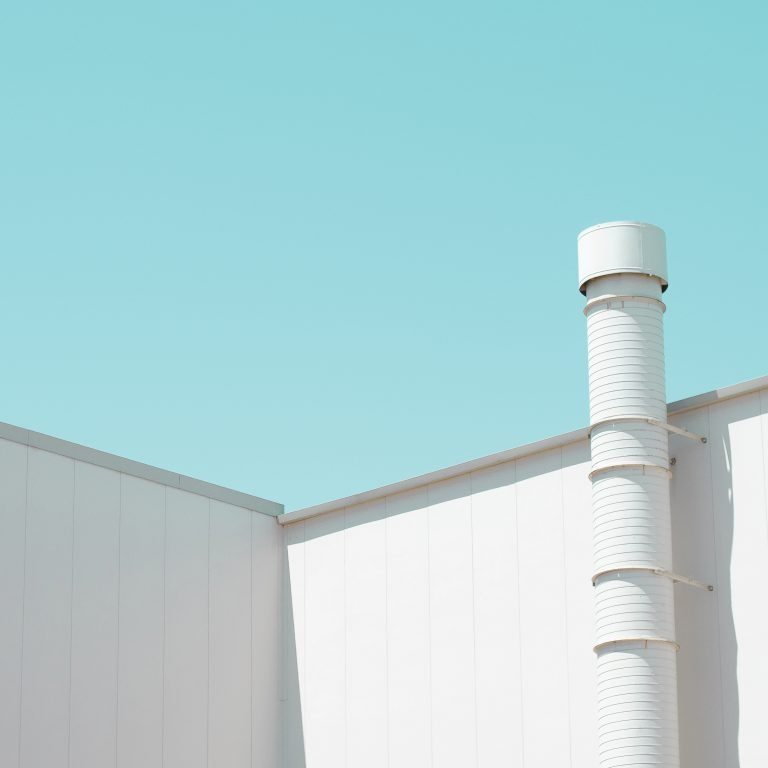 The 2020 Wisconsin Artists Biennial at the Museum of Wisconsin Art (MOWA) may not be what you’ll expect. There are no Arcadian landscapes, barns and lighthouses, no cows or cornfields. This show embraces the rich cultural mix exemplary of contemporary urban life. There are some references to nature, but this isn’t about rural vistas or art as decor.

This exhibit, on display through March 29 at MOWA’s mother ship, the main museum in West Bend, features 39 artists and 42 works by emerging and established artists from around the state, and there’s a lot to like here.

To begin with the top award winners, First-place winner Nina Ghanbarzadeh of New Berlin is an Iranian-American artist who received her MFA from UW-Milwaukee and has a business designing children’s toys. It’s all but impossible to describe the subtle beauty of her understated yet powerful work. Referencing the non-imagistic work of Islamic culture, she creates lyrical patterns of Arabic calligraphy. The dense and obsessively precise work forces the viewer to come in close to appreciate the subtlety of her execution and then move back to appreciate the composition as a whole

Xiaohong Zhang of Fort Atkinson, a teacher at UW-Whitewater who was born in China, is the Second Place winner with a triptych entitled “Springwater I,II,III” and featuring 3-D modeling and 2D print on canvas. It’s a strikingly colorful scene of machines used for digging up water from springs, the bright-red machinery juxtaposed to the serene landscape.

Benjamin R. Balcom, an Assistant Film Professor at UW-Milwaukee, is the Third Place winner with a video featuring sights in the city of Milwaukee. It’s a series of sparse, clean images which turns recognizable scenes into a kind of anywhere, USA industrial city, but with an intriguing voice-over text about the perfect society, and it’s quite a surprise to learn who wrote it, more then a century ago. Make sure you watch it until the end!

This work is echoed in two simple and almost stark photos with strong flat planes of color by Martha Coaty of Racine.

Some of my other personal favorites in the show are David Najib Kasir’s painting of figures and patterns and bight colors in compositions referencing Arab mosaics and the longing for his mother’s Syrian homeland.

Niki Johnson’s confrontational yet poignant sculpture of a section of fence painted black with bits of human hair dangling menacingly from the top section is suggestive in many ways, perhaps of brutal escapes and possible failures.

“Tree Intuiting chair fractal”, by UW-Milwaukee Jewelry and Metalsmithing Professor Yevgeniya Kaganovich presents a tree that has fallen in the woods and turned into a chair which produces lots of little chairs as the branches and leaves, combining beautiful craftsmanship with humor

Scott Espeseth’s “This bag contains shredded paper” is a black and-white watercolor painting in the classical realist still life tradition. Espeseth sees life lurking in banal inanimate objects. We can sense the shredded paper about to burst out of the plastic and invade the space of the painting.

Madeline Glaspey’s photo-realist painting, “Pledge Allegiance, Mississippi 1966”, is based on photos her father took while working for Head Start in 1966 in Liberty, Mississippi. The result is an homage to her father, a memory transformed, and a powerful reminder of the Civil Rights activists of the 1960’s.

Jill Sebastian’s formal table of handmade papers from various herbs and vegetables — produce from a garden? — includes a chart so the viewer can see the source plant for each paper as it is arranged on the table. All done in myriad, neutral elegant colors, all subtly evocative.

Diane Levesque of Kenosha, who teaches at Carthage College and received her MA from the University of Chicago, has a painting from a series called “The Penny Dreadfuls.” This piece is entitled The Chariot and references literature, mythology, Staffordshire figures and her father. The acrylic painting is dense with figures, colors and thick black lines that run through connecting and dissecting the various objects. There’s an expressionistic, graffiti feel to this forceful vital painting.

Another artist who references literature is Rob Neilson, whose exquisite bronze homage to the Italian poet Dante is entitled “Abandoned in the Vernacular” Neilson is the Frederick Layton Professor of Art at Appleton University and has had numerous public art commissions around the country. It’s a lovely work.

There is a wide variety of works in the show, some with references, some literary, some political. Most also have a personal resonance, often based on family and/or real-life experiences, which gives the show an accessibility. The exhibit is smartly curated, not overcrowded, with each piece given its due and the sum total leaving me optimistic about the future of art in Wisconsin. 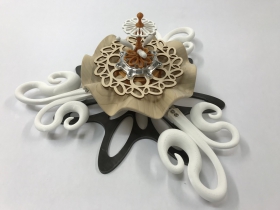 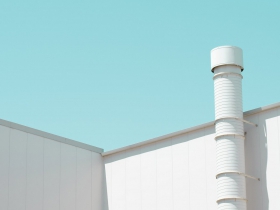 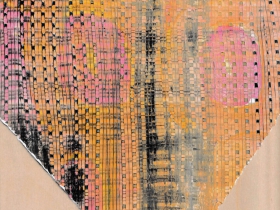 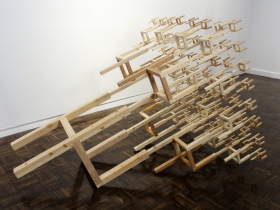 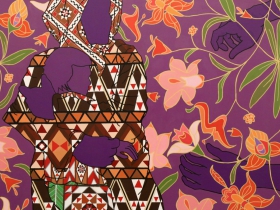 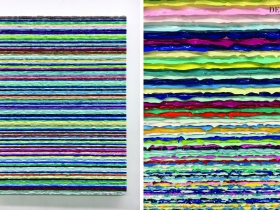