By Gretchen Schuldt, Wisconsin Justice Initiative - Feb 24th, 2020 02:26 pm
Get a daily rundown of the top stories on Urban Milwaukee

State Supreme Court candidate Jill Karofsky won in most of the north-shore suburbs of Milwaukee County in Tuesday’s primary election, while incumbent Daniel Kelly did better in the southern suburbs.

Karofsky and Kelly will compete in the April 7 general election. 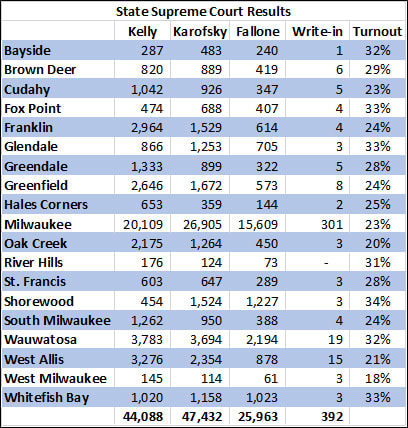 Karofsky, a Dane County circuit judge, and Fallone, a Marquette University law professor, are considered more liberal than Kelly, who was appointed by former Gov. Scott Walker and is a member of the conservative Federalist Society.

Kelly won in some communities because Karofsky and Fallone split the more liberal vote. All other things being equal, if Fallone voters back Karofsky in the general election, she will pick up Cudahy, River Hills, South Milwaukee, Wauwatosa, and West Milwaukee, all of which went for Kelly in the primary. She also would pick up an additional 96 wards in the city of Milwaukee.

Statewide, Karofsky would need to pick up all of Fallone’s votes, plus 1,952 more to unseat Kelly.

Milwaukee County primary voter turnout was highest in Shorewood, at 34 percent, and lowest in West Milwaukee, at 18 percent.