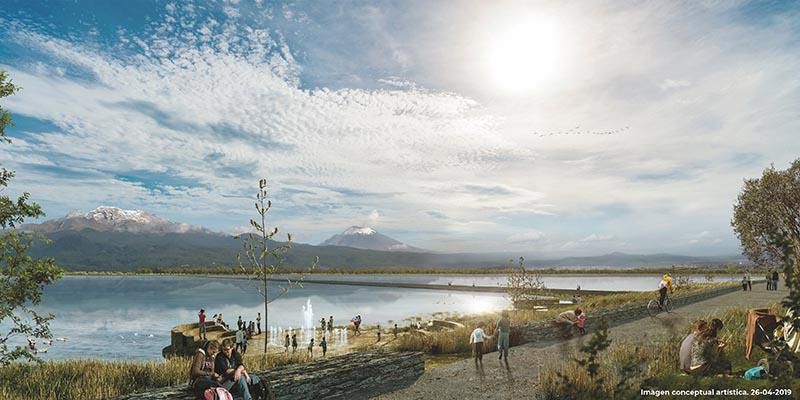 Mexico City’s Massive Park Proposal: Mexico City is proposing to build one of the world’s largest urban parks, measuring up to be roughly 36 Central Parks, or more than twice the size of Manhattan. The government and the architect behind the park, known as Parque Ecoógica Lago de Texcoco, hopes the mega project merges green infrastructure and public space, providing hiking trails and recreational lakes while restoring the Valley of Mexico’s water system. (Paul Biasco | Smithsonian Magazine)

Portland Adopts Rose Lane Vision: Portland City Council on Thursday unanimously approved a transportation vision leaders hope will speed up buses and streetcars struck in traffic. The final report, called the Rose Lane Project, evolved after more than a year of planning, design, and outreach. The first phase of $10 million will dedicate bus lanes, remove on-street parking, and give signal priority to transit, all in the next two years. According to city staff, the proposed street changes could affect about 100,000 people who currently ride some 45 various bus lines or the streetcar everyday. (Andrew Theen | The Oregonian)

Measuring Segregation All Wrong: Generally, people think of segregation personally, considering the people that live next door to them in close proximity. Social scientists, however, measure residential segregation by analyzing racial and ethnic distributions between specific geographic areas such as a census tract. Trevon D. Logan aims to bridge this gap between how we see segregation and how we measure it. At a personal level, people do not know boundaries to census tracts, so Logan proposes a new measure: comparing racial distribution with expectations of a perfectly integrated neighborhood (where all households are randomly placed in a neighborhood). Through this measure, Logan can confirm that cities have been becoming more segregated. (Trevon D. Logan | NBC)

Richer Cities Get Richer But Don’t Grow: Since 1980, geographic inequality has been on the rise as college-educated workers increasingly cluster in certain cities. This is a well-known narrative, but it is incomplete. While rich cities are getting richer, economic activity is actually not becoming more concentrated in a few dominant places; it is actually less concentrated in a handful of top metro areas today than it has been during most of the past half-century. In 2018, 21.7% of total income went to the top five metros ranked by total income: New York, Los Angeles, Chicago, San Francisco and Washington. This is down from 26% in 1969. Generally, aside from a few exceptions, economically successful place sin America have gotten bigger or richer but not both. (Jed Kolko | New York Times)

Rise and Fall of Japan’s Largest Social Housing: Japanese urban environments can be strikingly retro, where outside of central districts in big cities one can find faceless rows of cookie-cutter townhouses. In the 1960s and 1970s, Japan aimed to solve its housing crisis with uniform gray concrete apartment blocks. Like their Western counterparts, these mass housing projects, called “danchi”, were once seen as highly desirable living environments, but are now a source of various social issues. These danchi were meant to help Japan overcome its imperial past and military defeat in WWII and they were successful, so much so that the Japanese government officially declared in 1970 that its housing crisis was solved. But enthusiasm for danchi slowly faded, and now the complexes that remain are socially isolating, lack accessibility due to not having elevators, and pose safety and mental health issues, particularly for the elderly. (Tatiana Knoroz | ArchDaily)

Not everyone hates their commute, according to recent research by Patrick Singleton and Prasanna Humagain of Utah State University. While drivers and transit riders would prefer to teleport to work if they had the option, the majority of cyclists and pedestrians surveyed would keep their current commute.

–Rayla Bellis at SSTI discussing a new report that says those who walk or bike to work enjoy thier commute more than those that drive.

This week on the podcast, Ben Levine of the Metrolab Network discusses how cities and universities can work closer together on urban issues.