What Is the Future of Big Tech?

Big Tech's fast-paced expansion and monopolization remade the world, but what comes next? 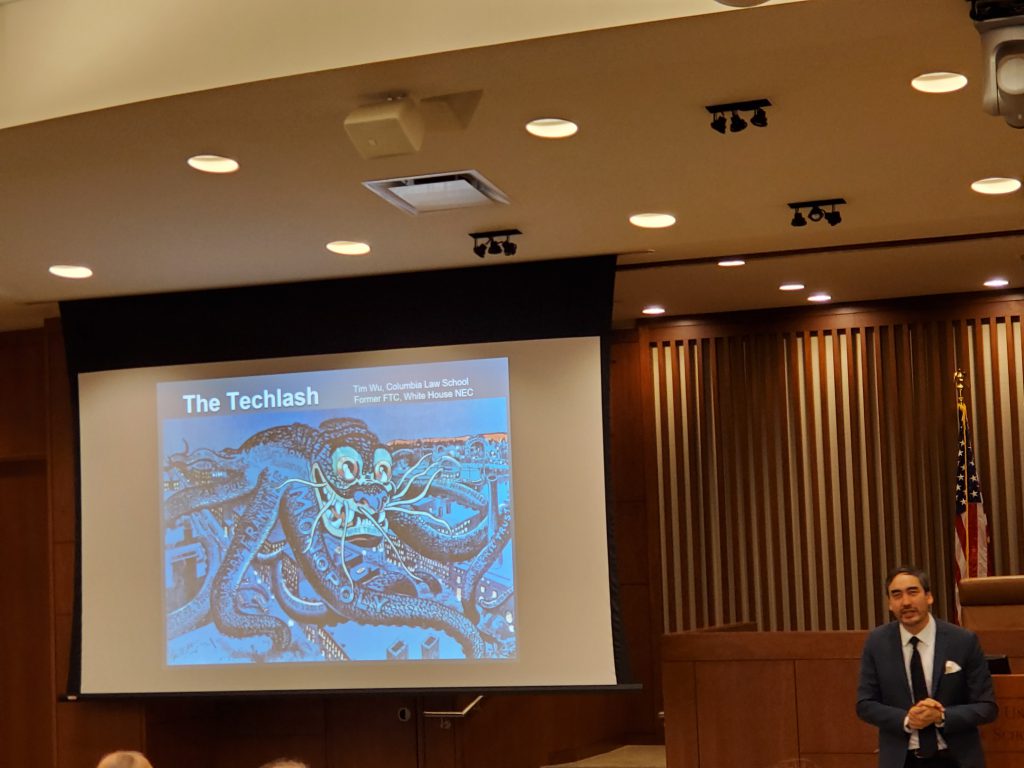 Amazon, Facebook and Google have become such an entrenched part of our cultural vernacular, and a growing part of how we conduct our lives, that the youthful age of these companies can be overlooked.

A Columbia Law School professor visited Marquette University Thursday to give a talk on the rise of big tech, and argued that today’s monopolization could lead to unintended consequences, even a repeat of history.

Timothy Wu, is the Julius Silver Professor of Law, Science and Technology at Columbia Law School, and has a breadth of experience in such disparate arenas as public policy and technology. His professional background includes stints in government, serving on the National Economic Council under President Barack Obama’s administration, on the Federal Trade Commission and in the New York Attorney General’s office.

Throughout his talk, “The Techlash: How the Platforms Gained Power and How They May Lose It,” Wu explained how these tech companies became the commercial behemoths they are today.

“Everybody knows they are big,” Wu said. “And they have grown really, really fast.” But today’s model was not what some experts, including Wu, had in mind when the Internet rose to prominence in the late 1990s.

In the early, wild west days of online culture, an open platform and open network system gave entrepreneurs the ability to tinker toward a captive audience, Wu said.

“There was a period of time when the old rules of economics didn’t matter anymore,” Wu said. “It was uniquely empowering. The old model, when big companies had the monopoly, was going away.” But the tide has shifted thanks to relaxed government intervention, Wu said.

Big tech firms began creating their own monopolies when they gobbled up competing companies. One of the most prominent examples, he said, is Facebook’s $1 billion acquisition of Instagram in 2012.  At the time of the purchase, 2-year-old Instagram boasted 40 million users — and a younger-trending audience.

If the past laws of economics in the tech space played out, Facebook could have been a fading company in the same way once white-hot MySpace was the decade prior, Wu argued. But cash rich Facebook, instead, absorbed its competitor. “They were an existential threat to Facebook,” Wu said. “In the race for big data, here was this desire to acquire the most dangerous competitors.”

It’s not just indomitable market share that is a cause for concern. Privacy advocates are also troubled by Tech’s modern-day monopolies, Wu said.

Then there is the long view. For instance, back in the 1960’s the cutting edge firms were AT&T, IBM and Xerox. They reigned supreme, until they entered a period of stagnation. “The trouble, I think, starts 20, 30, 40 years from now,” Wu said for these new tech behemoths.

While it is difficult to see what’s ahead in the next decade, Wu also said the well-pronounced missteps at Facebook in recent years has enhanced the possibility of breaking up some of these big tech firms.

“It is an unusual, interesting time,” Wu said. “It does seem like an anti-trust revival is in the cards right now.”