Speaker Robin Vos is proposing a bigger investment, and Evers is on board.

By Melanie Conklin, Wisconsin Examiner - Feb 6th, 2020 01:30 pm
Get a daily rundown of the top stories on Urban Milwaukee 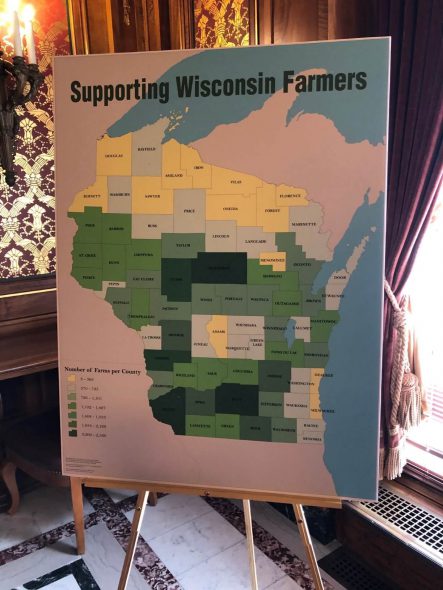 Gov. Tony Evers welcomed Tuesday’s announcement by Speaker Robin Vos (R-Rochester) that Republicans are interested in emphasizing bills to help farmers and agriculture in Wisconsin — and writing additional bills that invest even more than his allocation of $8.5 million  — during the remainder of the session.

In his State of the State speech, Evers called for a special session of the legislature to take up bills to help struggling farmers and agricultural workers. He laid out eight bills, which Vos described as being part of a long-term solution, but not addressing the more immediate crisis of the daily loss of dairy farms and the highest farm bankruptcy rate in the nation.

But Evers is already on board with the concept of going “bigger and bolder,” as Vos called Republican vision.

“The governor would absolutely support an increased investment in proposals that will support our farmers and rural communities,” responds his spokeswoman Melissa Baldauff.

She says Evers “tried to meet Republicans where they are since they have been reticent to make needed investments, but if Republicans want to spend more on important proposals like mental health resources, dairy processor grants and the Wisconsin Initiative for Dairy Exports he’s happy to work with them.”

She adds that he was tailoring his special session bills to what he thought was a Republican reluctance to make big investments: “You’ll recall that they had a difficult time releasing $200,000 in funds to support farmer mental health.”

Baldauff says Evers has been meeting with both Republican and Democratic legislators on the agriculture bills and will continue to do so.

“The governor has been meeting with legislators from both sides of the aisle and is encouraged by their willingness to follow his lead when it comes to investing in agriculture and our rural communities,” Baldauff added. “We look forward to seeing what Republicans in the legislature put forward once they have some plans.”

Vos said that the Assembly Republican Caucus will meet on Thursday to discuss potential bills and make those bills public as soon as Friday, Feb. 7.