By Isiah Holmes, Wisconsin Examiner - Feb 4th, 2020 11:28 am
Get a daily rundown of the top stories on Urban Milwaukee 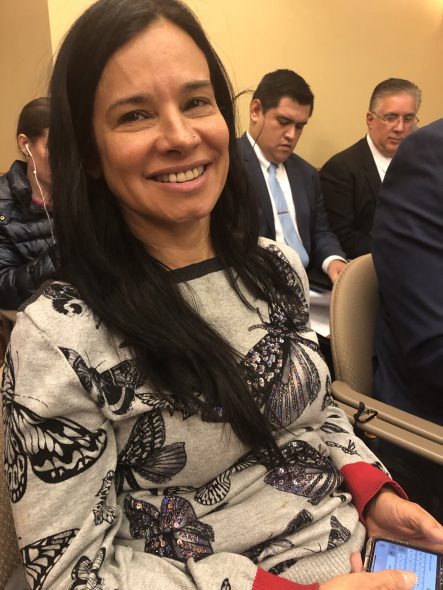 Community organizations, including the immigrant rights group Voces de la Frontera, want to tap what they see as an invaluable resource in 2020 — the Milwaukee voter. On Saturday Feb. 1, the group united with allies from across the city and state at its annual assembly to discuss how to use a new Relational Voter Program (RVP) to create a statewide network of invigorated, registered voters.

“What we voted on is to approve our game plan for 2020,” Voces de la Frontera Executive Director Christine Neumann-Ortiz told Wisconsin Examiner, “which is to continue to build out our Voceros por el Voto program.” Essentially, the initiative mobilizes neighborhood residents and Voces allies to tap into personal networks and spread the word that everyone is needed in the upcoming elections.

In 2016, Voces de la Frontera organized 410 of its members to create a network of some 5,600 Latinx voters, 67% of whom were new voters. “We are already advancing pretty aggressively and meeting our goal,” said Neumann-Ortiz, “Building out a network of people you know, friends and family.”

It’s not just registered voters who are important to the process. Neumann-Ortiz says everyone, including people ineligible to vote, are crucial in stimulating those who can. “We want to raise consciousness about people not just committing to turn out to vote — it’s also about knowing that we have to build an organization,” she said. “And to do that, we have to find push-back against the kind of hate and xenophobia and efforts to suppress the vote that we definitely anticipate happening in Wisconsin, as it is Ground Zero for the country.”

Lt. Gov. Mandela Barnes, who attended the Voces assembly at Milwaukee’s South Division High School, applauded these momentum-building efforts. “Voces de la Frontera is instrumental in amplifying the voices of Wisconsin’s Latinx community,” Barnes told Wisconsin Examiner. “Their work is a critical piece to making Wisconsin a more equitable state. Despite efforts to disenfranchise the vote of communities of color and instill fear among immigrant communities, our administration will continue to encourage civic engagement and fight to maintain people’s access to the ballot.”

Neumann-Ortiz points out that “Voces doesn’t just work in isolation,” and is part of a nationwide network pushing for progressive reforms. That network, she says, seeks to “turn out especially new and infrequent voters which are not a part of the official voter files, and it’s very much the constituency that we represent.” Particularly young, multi-racial, African-American and Latinx voters, but also working-class whites and pro-immigrant rural voters. “We aren’t taking anything for granted,” said Neumann-Ortiz.

“The Latinx vote is going to be absolutely crucial in the fall election,” said Alex Brower, who attended the event and is running for Milwaukee County Comptroller. “The Latino community is a huge part of the city of Milwaukee.”

Brower senses more urgency in this election than in 2016. “This year, this time around, I’ve seen a lot more activity in working-class communities.”

Different things are important to different people, but to Neumann-Ortiz, the tone of 2020 is clear. “It’s pretty sharp, the choices we have right now,” she explained. “On the one hand, the threat of the harm that can only grow if the far-right Trump Administration is allowed to continue to stay in power. … And then, on the other hand, the broader movement of people who, for a long time now, have supported the kind of change we need at the federal level.”

Although Trump is an obvious target, Voces is also vigilant when it comes to local policies.

“We’ve been able to make important advances,” says Neumann-Ortiz, mentioning the case of José (Alex) Alejandro de la Cruz-Espinoza, a Milwaukee man who was arrested by Immigration and Customs Enforcement (ICE) in front of his wife and daughters, with the assistance of the Milwaukee Police Department (MPD). The incident was resolved over two months later, when de la Cruz-Espinoza was released from custody. Milwaukee’s Fire and Police Commission also subsequently voted to take on policy recommendations from Voces de la Frontera, which state that MPD will not cooperate with ICE without a judicial warrant, which the agency lacked in the de la Cruz arrest.

Celebrations were short-lived, however, as bills to protect immigrant communities faltered in the Capitol, and a new measure surfaced that sought to penalize municipalities that endorse sanctuary policies. “Each and every election matters to us,” says Neumann-Ortiz, “and we see it as a stepping stone as we scale up to the national one.”

“Whoever the Democratic nominee is going to be needs to have a platform that is going to excite and inspire working-class voters,” Brower told Wisconsin Examiner. “They need to have a very serious message that’s going to resonate with working-class people.” The Milwaukee Comptroller candidate believes Democrats need to move away from appeasing suburban communities and others who flocked to Trump’s corner. “I think we need to be targeting and putting out a message that appeals to working class voters,” he says.

Neumann-Ortiz, like Brower, disputes the idea that Milwaukee and minority communities are to blame for the outcome of the last election, because they didn’t get out the vote. Part of the issue is also the allocation of resources to organizing groups, she says. “I think that the political structures in place, which help to bring resources to community groups, came late,” she says. Although resources are coming into the state a bit more quickly this time around, she fears it’s not fast enough. Milwaukee recently experienced a visit from the president, and Madison hosted Vice President Mike Pence days later.

Organizing, not only eligible voters, but entire communities for progressive causes, was a game changer for Voces in 2018, and helped elect Gov. Tony Evers and other progressive Wisconsin politicians statewide.

“All voices need to be heard,” said Lt. Gov. Barnes, “and need to be counted so that all Wisconsinites can have an opportunity to thrive.”