Fallone manages to stay on the outside as Karofsky and Kelly sling mud at each other.

By Shawn Johnson, Wisconsin Public Radio - Jan 31st, 2020 12:05 pm
Get a daily rundown of the top stories on Urban Milwaukee

As Kelly and Karofsky repeatedly sparred, the third candidate, Marquette University Law School professor Ed Fallone, questioned whether the public wanted to see more of that type of fighting on the Wisconsin Supreme Court.

The top two vote-getters on the Feb. 18 Supreme Court primary will advance to the April 7 general election. While the Supreme Court is officially a nonpartisan office, Kelly is supported by Republicans while Karofsky and Fallone are backed by Democrats.

Kelly is part of the court’s 5-2 conservative majority, which Karofsky said regularly ruled in favor of Republicans and Republican groups.

“Every single time that Justice Kelly has the opportunity to rule in favor of the right-wing special interest, of the Republicans, he does it every single time. And that is why people think there is corruption on our Supreme Court,” Karofsky said.

“I’m here to tell you that is a disgusting slander and it is beneath contempt,” replied Kelly. “I categorically reject it, and I’m going to take it out back and throw it in the garbage where it belongs.”

While Fallone also criticized Kelly, on multiple occasions he used the fights between Kelly and Karofsky to call for more decorum on the bench. 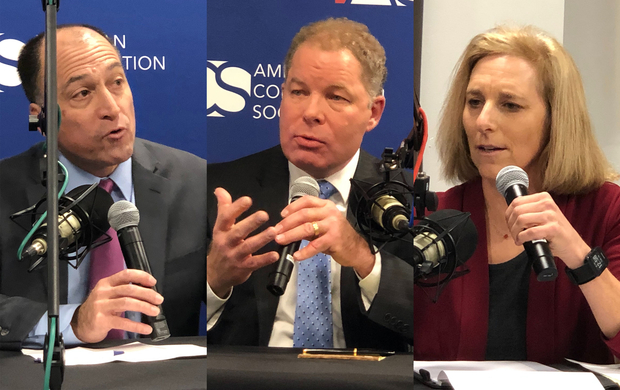 The debate hosted by the Milwaukee Bar Association and broadcast by WisconsinEye was contentious from the beginning, but questions about recusal, campaign donations and when the court should break from precedent ratcheted up the tension.

Both Karofsky and Fallone said they favored stricter recusal standards for supreme court justices, who can currently decide for themselves whether or not a case presents a conflict of interest.

“When a party leaves the courtroom having lost a case, they shouldn’t have a question in their mind whether they lost on the merits or whether they lost because the opposing party or opposing counsel had made campaign contributions to the judge,” Fallone said.

“We need to have a bright-line rule,” Karosky said. “Anyone who received money above that line from a certain party or corporation should not be allowed to sit on that case.”

Karofsky said he favored a plan pushed unsuccessfully by a group of retired judges in 2017 that would have required Supreme Court justices to recuse themselves from a case if they receive contributions of $10,000 or more from a party or a lawyer. Current law lets people contribute up to $20,000 to a Supreme Court candidate.

Karofsky said the plan should have been given a hearing by the court and that she supported a “clear recusal rule.”

Kelly said setting a recusal threshold lower than the legal contribution limit amounted to “second-guessing” the people of Wisconsin. He also said the recusal plan stood to create more problems than it solved.

“It was on its face completely unworkable,” Kelly said. “It created so many opportunities for political mischief that there is no way that we could have turned that into anything like a workable rule.”

The candidates were also asked about the importance of court precedent, noting that the Wisconsin Supreme Court had issued a ruling in 2019 that ran contrary to a decision it handed down in 2016 regarding the power of the state superintendent of public instruction. The 2019 ruling sided with the Wisconsin Institute for Law and Liberty, a conservative think tank and law firm.

Kelly said the court was not bound to rely on earlier rulings if justices believed they were wrong.

“Our role is to say what the law is, it’s not to propagate error,” Kelly said.

Fallone said he would rely more on precedent if elected to the court, taking a shot at Kelly in the process.

“We live under the Wisconsin Constitution, not Dan Kelly’s constitution,” Fallone said.

Karofsky also attacked Kelly, saying the 2019 ruling on the state superintendent illustrated what’s wrong with the current court. She said the only thing that had changed in the three years between those two cases was the makeup of the court, namely the appointment of Kelly whom she said always found a way to rule in favor of Republicans.

“There is no way that the law can always be on their side,” Karofsky said.

Kelly said the court was not bound by the 2016 decision in the superintendent case since it was never joined by a clear majority.

As the debate was nearing a close, Kelly demanded an apology from Karofsky, saying she had defamed not only him but the entire court under Chief Justice Patience Roggensack.

“You owe me an apology for this disgusting slander,” Kelly said. “If you didn’t have slander, you wouldn’t have a campaign.”

“I’m not going to be bullied by you,” Karofsky shot back.

Kelly was appointed to the court in 2016 by former Republican Gov. Scott Walker to fill out the term of retiring Justice David Prosser. Prior to joining the court, he was a private attorney whose work included a defense of the 2011 redistricting plan drawn by GOP lawmakers and signed into law by Walker.

Before becoming a judge, Karofsky was the director of the Wisconsin Office of Crime Victim Services. She was also an Assistant Attorney General at the Wisconsin Department of Justice.

Fallone ran unsuccessfully for the Wisconsin Supreme Court in 2013, losing that election to Roggensack.