That and “Dusty Springfield” were two memorable songs by the late Norma Tanega. 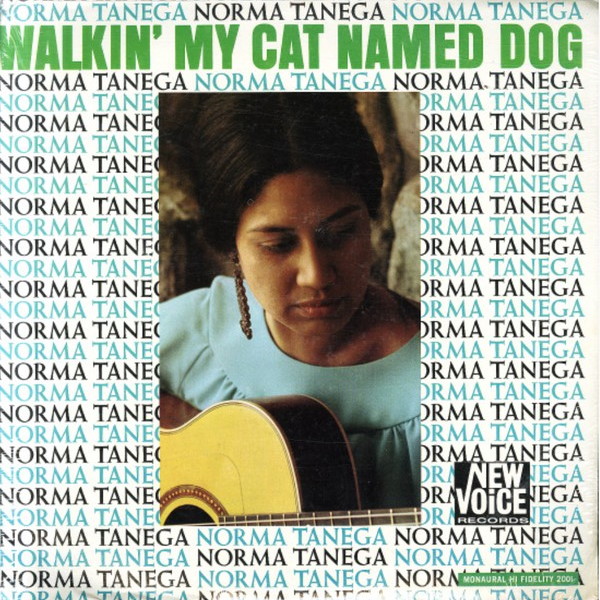 I came pretty close to completely forgetting the song “Walkin’ My Cat Named Dog”, but I must have had one or two neurons still assigned to it. Reading Norma Tanega’s recent obituary in the New York Times (she actually died in late December) brought back a vague memory. So I went looking for it on YouTube and it turns out it’s a very catchy song and performance. The story of her one hit (in 1968) and the life around it makes for an interesting 60’s tale of a free spirit immersed in art and music. Not all footnotes are created equal, and Norma’s career seemed like it had the potential to be so much more.

The song is feather light — out of place in a time when heavy metal was being born. It’s friendly, goofy and fun, just the thing to add some light and warmth to a frigid winter day. Norma really did have a cat named Dog. She settled on a feline companion when her landlord told her there were no dogs allowed. She didn’t actually walk it, but it made for a good title. In the video we see a cheerful, composed performer who described herself as “not fitting in.” Folkies didn’t embrace her — maybe it was her guitar, a Gibson SG, the same model Sister Rosetta Tharpe and Eric Clapton favored at one time. Despite the cool guitar, she was probably too fey to be embraced by rockers. Trapped between genres, she had just that one hit and disappeared from view.

She stayed in the music business a while longer, and on a tour of the UK she became romantically involved with Dusty Springfield. They were together for five years and Norma penned a few songs that wound up on that supreme diva’s records. She also wrote, with the cabaret artist Blossom Dearie, an odd little number called “Dusty Springfield.” Recorded by Ms. Dearie, with her childlike soprano and sweetened to perfection by some nicely arranged strings, the whimsical lyrics seem to float in the air.

Yes, there was a time when a song praising Dusty Springfield and the poetry in her name was sung by someone named Blossom Dearie. Sometimes I feel like I was born at the wrong time. The innocence in both of these tunes is in short supply in 2020. It’s probably best not to clutch too desperately at what is beyond a doubt a fictional past, but it’s a pleasant little fantasy. That screwball world, conjured up with such ease by Norma, appeals to me. When she left us at age 80, I’m pretty sure she earned her wings.

4 thoughts on “Sieger on Songs: “Walkin’ My Cat Named Dog””