So you can expect that at her Pabst show. Along with lots of laughs. 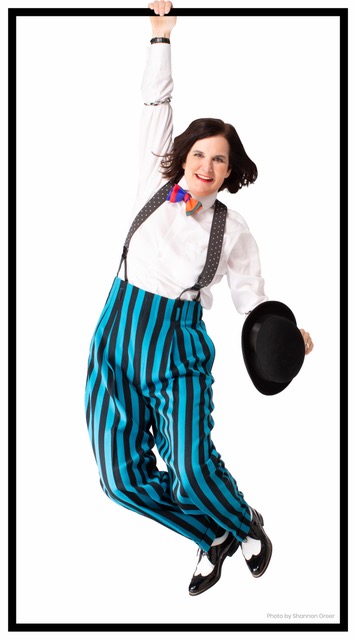 It’s surreal when you’re watching a few YouTube videos of a comic in preparation for a scheduled interview and then turn to your ringing phone and see her name, Paula Poundstone, on your Caller ID. The veteran and truly unique comedienne will be performing at the Pabst Theater on February 1st.

That doesn’t mean the comic likes to work blue, though she’s not squeaky clean, either. “I don’t think it’s necessary to curse in my act. You can’t curse on television. They bleep out a lot of what I say on NPR too.” Poundstone notes. “But it’s kind of a shame as I think I’m at my most absurd, funny, germane when I’m on a roll, saying what I want to say, spreading my wings. I have no problem with cursing, it’s just not what I do regularly.”

Poundstone acted as political correspondent for The Tonight Show during the 1992 US Presidential Campaign. One could only imagine how she’d handle today’s hyper-partisan political climate. When you press her on politics, you can almost hear the ‘ugh’ through the phone.

Whether with political observations or other material Poundstone says  there is plenty of room for comics that work a little darker. The key for her is the freedom to roam. “That’s why I like doing my podcast, Nobody Listens to Paula Poundstone. There are no censors, no ‘suits’ telling you what you can or cannot say. I get to think of a lot of stuff, throw it against the wall. Young kids seem to enjoy the heck out of it.”

Poundstone isn’t the type of comic that seeks constant approval, though she does feel you have to be a bit narcissistic to get into the business.  “It’s fun to be in the middle of comedy,” she says. “There is something thrilling about the business. I remember the first time I was recognized. I was working in a bookstore and a customer came in and said, ‘didn’t I see you on the news this morning?’ It felt amazing.”

Comic Robin Williams was known for being ‘on’ all the time. Oddly, Poundstone found him very different in intimate settings. “It was almost disconcerting how quiet he was privately,” Poundstone says. “I thought for the longest time that it was me, that he was so bored in my presence. So, I didn’t have a lot to say to him. I have another friend who also knew him, also a comic. We were talking one day and I mentioned I didn’t think Robin liked me and his eyes widened and he said Williams was the same way with him. I think Robin was like a cheetah. He could go 90 mph when he felt like it, but just laid around the rest of the time. I knew him during his sober years, but I imagine he was fueled by chemicals for a while.”

It was about 26 years ago when Poundstone made her way out of the clubs and into theaters, her career rising to a new level. She notes she never works with an opening act. “I spent all these years developing an audience. A person gets my humor and comes out to see me. I don’t see the need to have them listen to an act that may not appeal to the same sensibilities they expect with my act.”

Poundstone understands she’s lucky to do what she does for a living, and says the hardest part isn’t being on stage: “It took many years to be able to do my act, but it’s hard to promote a show. All the work that goes into it prior to getting on stage. That can be tiresome.”

She says she thinks of her comedy as a muscle she needs to keep in shape. “I have to set up an environment where I’m allowed to be me. My favorite part of my job is interacting with my audience. I like finding out what they do for a living. That’s the difference between me and a lot of comics. I leave my line out there longer, it becomes my fishing expedition. It may turn out to be a gold mine. I may stumble on to something as we are talking. Later I might come back to that person. It’s a game, like talking with buddies. It’s shit you can’t repeat, the ‘you had to be there’ stuff.”

When Poundsotne first started, she used to memorize the material. “I’d be bussing tables and if you were watching, you’d see my mouth moving, reciting my act. I was rehearsing. But that was hard because if I got off track, I’d forget where I was in the five minutes and that would mess up the whole rhythm. That’s when I’d start working the room or blurt something out, not knowing where it came from. Often times that turned out to be some of my best moments on stage.”

Poundstone grew up watching shows like Rowan & Martin’s Laugh-In and The Smothers Brothers. “I loved watching Lily Tomlin. I never had the balls to do that kind of stuff. I have such admiration for Tomlin, Goldie Hawn, all of them.”

Finally, some advice if you ever want to do five minutes of comedy, say, to scratch it off your bucket list. Don’t make the mistake of having a couple of drinks before you go on thinking it will make you less nervous, Poundstone warns. “Being nervous is a natural response. It’s sort of like fear is helpful in some settings. Feeling pain is a good thing. When you feel pain, you realize you ran the marathon, dove off a cliff. You’re sharper when you’re sober.”

Poundstone will be diving off her next cliff Saturday night at the Pabst. I’m betting she lands with lots of laughs.