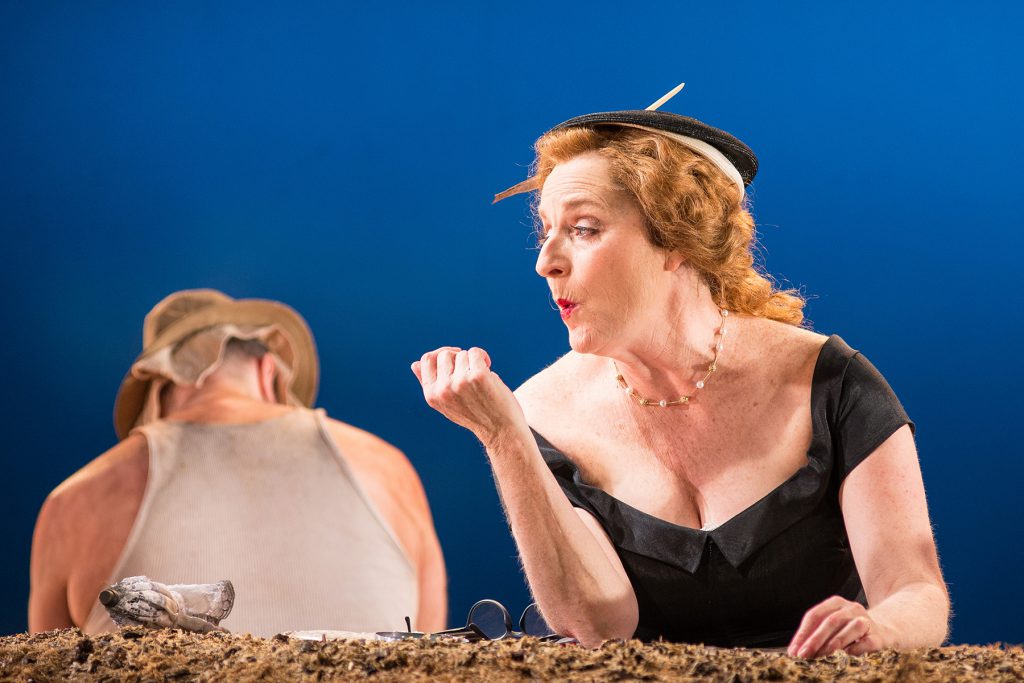 Some 60 to 70 years after their creation, Samuel Beckett’s plays still stand among the most difficult and dauntingly modernistic to perform, not just because of their often grim view of the state of man (he sure is not alone among playwrights in that concern) but in his reliance on the spare essence, the basic essentials of theater that so contradict the easy shiny material methods of our times. He reduces images and language to the enigma and complexities that challenge performers and audiences to recognize the human archetypes our society often reduces to stereotypes.

Given that reputation it is hard to convince patrons that Happy Days – in a superb production running through February 16 at the Broadway Center’s Studio Theatre – unfolds as one of his brightest and most accessible plays, a crowning achievement for Renaissance Theaterworks.

You will be hard pressed to believe me about the humor or the fascination when a lone actress playing Winnie begins buried up to her torso in a huge anthill and ends buried even further, with a ridiculous hat perched on her immovable head, so that only her face is visible as she prattles mostly in vain for her husband Willie to emerge from his own mound.

It is a vision of man restrained as far as we think theater capable and then restrained even further on his journey into the earth. Yet something curiously mobile and engaging happens in the unseen hands of actress Laura Gordon. She cannot control her surroundings, but she controls us – in her reliance and even joy in the contents of her bag, in her daily routine ablutions, her memories of her past, her fading bits of classical words from Shakespeare to Milton, her bossy but loving commands to Willie to stir himself from his mound, the hints of sexual ardor, even that mysterious revolver she took away from her husband.

There is extraordinary life and insight as we learn much about Winnie’s upbringing, the sad spectacle she has been for passersby, her bright refusal to accept the worst.

It is not only that audiences sit rapt. We are forced to feel the strictures and possibilities in our own lives. How would I respond to the constraints forced on Winnie? Would I see nothing but happy days and many mercies?

In the second act, there are glimpses of pain and even momentary despair from Winnie as the confines grow further – and yet surprisingly there may be even deeper humanity. Audience members may leave feeling around to see if their own brows, their cheeks, their eyes forced frontwards, their lips forced up to their nose can find as much expression and humanity as Gordon does.

But it is not just her masterful meticulous acting that opens up to every quiver in Winnie’s disappearing act. It is how recognizable, how clear every moment of her thought is made in a Beckett script that sometimes seems to relish mystery – and yet the actress keeps some central mysteries in play. She is not explaining Winnie to us, she is living her.

It is mainly in retrospect that we realize how carefully director Marie Kohler has orchestrated our involvement.  If you feared the anthill Winnie is perched within was too high, too big and too remote, scenic designer Lisa Schlenker has instead provided just the right space with a skyscape for the studio space. Similarly, sound designer Josh Schmidt has perfectly blended Offenbach’s bright music with the Holocaust nuclear winds of the times that shaped Becket.

Reduced largely to guttural noises and the hunched shape of his back as Willie, Todd Denning remains vibrantly alive for Winnie and us. I might quibble with the last few minutes when Kohler must decide how ambiguous to leave the relationship between Winnie and Willie, but by this point the production has laid out the inevitability of the end and the sense of life the audiences will take home with them.