By Isiah Holmes, Wisconsin Examiner - Jan 27th, 2020 11:07 am
Get a daily rundown of the top stories on Urban Milwaukee 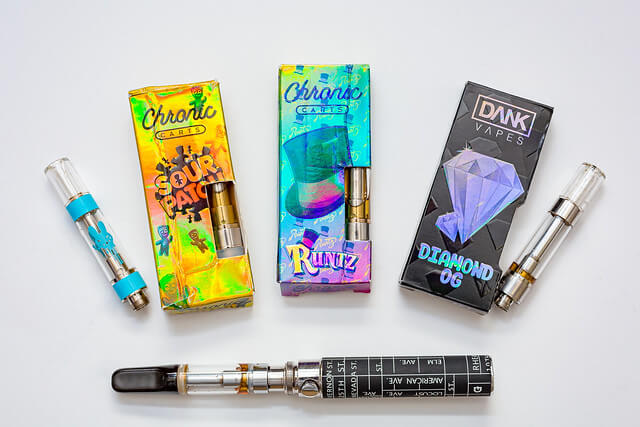 Vapes which tested positive for vitamin E. Photo from the New York Department Of Health.

Vaping, especially among young people, was a key component of Gov. Tony Evers’ state of the state address. On Sunday, in advance of his Wednesday speech, he released a package of new state-level policies aimed to strengthen enforcement of e-cigarette sales, and restrict their access to youth.

“Vaping is a serious public health epidemic and it is time to take action,” Gov. Evers said of Wisconsin’s new anti-vaping initiative. “State agencies will continue to work closely with local public health officials, law enforcement, and the medical community to implement solutions, but we also need our partners in the legislature to join us in order to really move the needle. I hope to see these bills pass quickly and with bipartisan support.”

Under Evers’ plan, the departments of Health Services (DHS), Revenue (DOR) and Agriculture, Trade, and Consumer Protection (DATCP) all have separate, unique roles in curbing Wisconsin’s vaping appetite. DOR will explore enforcement options for vaping tax fraud. Consumer alerts will be issued by DATCP to inform individuals of potential risks related to vaping by youth, and update information on reporting illegal vape sales to minors.

DHS has the largest role in the plan, including continuing medical investigations and creating public health campaigns against vaping. This new initiative represents one of Wisconsin’s largest responses to the rash of vaping illnesses which took the country by surprise in late 2019.

For Wisconsin, the hospitalizations began in August. Eleven youth were hospitalized with some form of mysterious lung damage. Their symptoms, including  chest pain, fatigue, difficulty breathing and weight loss, resembled dozens of other cases across the country. Doctors scrambled to understand an unfamiliar enemy, as some patients began to succumb.

The first death occurred in Illinois, and it was followed by others across the country. Vaping was soon identified as a common thread between the cases, but more questions than answers remained. A variety of contaminants like Vitamin E actaine, detected in samples of THC and e-cigarette products from New York and elsewhere, were another piece to the puzzle. Still, determining which vapes were used by which patients proved a daunting challenge.

Many had used products which they believed contained Tetrahydrocannabinol (THC), largely purchased through informal or black market sources. Others, however, stated they’d only vaped non-THC products such as flavored vapors, or nicotine-containing products.

To date, 2,668 cases are being tracked by the Centers for Disease Control and Prevention (CDC) across all 50 states, and two US territories. Sixty deaths have been reported nationwide since the hospitalizations began in August 2019. Though DHS is tracking 104 cases, no deaths have occurred in the Badger State. As swiftly as the illnesses spread, so too did legislative responses at all levels of government. The majority of these, from Michigan’s ban of flavored vape products to a proposed ban on the federal level, focused on the legal e-cigarette industry.

Cutting the kids off

Understanding the illnesses meant federal and state agencies needed to coordinate their data and initiatives. Sen. Tammy Baldwin (D-Wisc.) called on the CDC to activate an Emergency Operation Center to help support medical resources, and hospitals nationwide found themselves on the front lines of a new “epidemic.”

The CDC eventually named the illness ‘e-cigarette, or vaping product use-associated lung injury’ (EVALI) and offered more detailed information. Some 37% of patients were 18-24 years old, with another 15% being under 18 years old. Use of THC-containing vapes was reported by 82% of all patients, with another 57% reporting having also used nicotine-containing products and 14% having only used nicotine vapes. Patients ranged in age from 13-85 years old.

Nevertheless, use of all vape products among youth became the prime target. The mysterious illness drew attention to not only black-market and contaminated products, but to the use of all vaping products.

“In order to keep kids safe, we know more needs to be done to educate teens and their families about the dangers of vaping and to reduce teen access to all tobacco products,” said Mike Gutzeit, MD, Chief Medical Officer of Children’s Hospital of Wisconsin.

The Evers Administration’s latest initiative has whole sections dedicated to this end. Along with specifying certain agency’s roles, the bills have broader policies including banning vape products on K-12 campuses, expanding the definition of public health emergencies and increasing funding to public health campaigns to address youth vaping in Wisconsin. Additionally, DHS will work with the Department of Public Instruction and school districts to develop and enforce tobacco-free policies. Educators may also undergo new training regarding the risks of e-cigarettes.

Days before Evers’ unveiled his initiative, Baldwin introduced her own bipartisan legislation, called the Resources to Prevent Youth Vaping Act. The act would require the Food and Drug Administration (FDA) to help the agency fund greater oversight of the e-cigarette industry, and boost awareness of the dangers.

“The rise of teen vaping is an epidemic and we must take action to protect children from the dangers of e-cigarettes and prevent them from using harmful tobacco products,” said Baldwin. “This legislation is an important step forward to fund stronger oversight of the e-cigarette industry and increase of prevention and youth awareness efforts.”

Lessons from the War on Drugs

Increasing enforcement and awareness campaigns for drugs, however, can take various forms and produce widely differing results. As the vaping debate waged, cannabis advocates like Rachael Steidl sought to add their own perspective gained from battling anti-cannabis drug war policies and propaganda.

“The most dangerous thing about marijuana is that it’s illegal,” said Steidl, deputy director with the pro-cannabis group NORML in southeastern Wisconsin. “Same thing goes for vapes.”

On one hand, she recalls visits to the Capitol to testify before the Joint Finance Committee, where she met numerous parents and teenagers concerned about youth vaping. “That was the hot topic,” adds Steidl. “Students and parents were outraged about vapes getting to the kids, and the fruity flavors, and the candy packaging.” However, she wonders whether enforcement and education should begin at home rather than the swift policy transitions which happened with vaping.

Steidl also is curious to see if any new anti-vaping campaigns in schools will look like recycled drug-war rhetoric. “I think that instead of abstinence, you educate,” Steidl told Wisconsin Examiner. “What are those underlying causes of addiction? Find out why we would want to vape in the first place. I think that really helps with a lot of things, and also parents keeping tabs on their kids like they should. The education for these things should be coming from the parents to the kid. Don’t wait for school, or their buddy to educate them.”

She has also encountered anti-drug groups in the past, and questions their model. “They really have some lies in their propaganda,” says Steidl. “And they’re really well funded, they have a lot of nice literature. But I don’t think making a melodrama but of a real situation really helps anything.” Particularly, dubious claims like cannabis kills people could get muddied into the conversation of vape use, and why in 2019 so many people got sick so suddenly. “That’s just not going to be believed by regular people. People have the internet, they can just Google it.”

It’s these lessons which Steidl hopes new pushes against teen vape use will take from the past several decades of drug war propaganda. Funding information which is meant to deter rather than inform ultimately hurts the credibility of the entire campaign and those pushing it. “Kids start to question everything they were told,” says Steidl. “We know prohibition doesn’t work. Fifty years of the drug war, and there’s drugs everywhere.”