After 22 Years Sen. Miller Stepping Down

Monona Democrat muses on a changing Capitol. “Compromise is viewed as a traitorous act.”

By Ruth Conniff, Wisconsin Examiner - Jan 22nd, 2020 02:45 pm
Get a daily rundown of the top stories on Urban Milwaukee 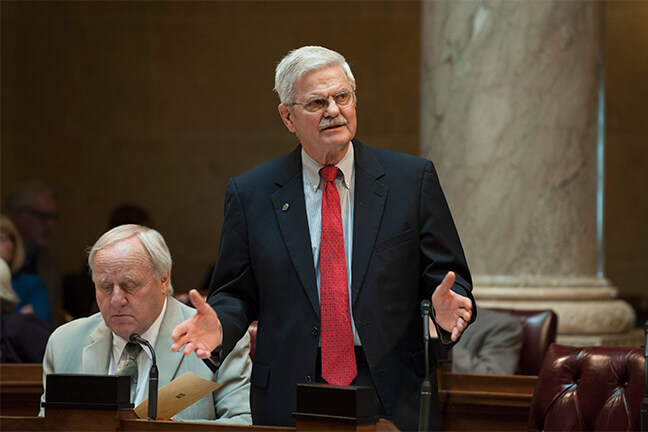 Sen. Mark Miller (D-Monona) announced Tuesday that he will not run for re-election in November. Miller served in the state Legislature 22 years, first in the Assembly, where he was elected in 1999, and then in the Senate since 2005.

“I will miss this place,” Miller said in a statement about his decision to step down. “I will miss being a voice for clean water, for better education for children and adults, for expanded health care, for improved economic security, and for responsible governance, but I feel it is time for someone new to do this job.”

After Gov. Scott Walker dropped his Act 10 “bomb” to eliminate collective bargaining rights for most public workers in 2011, Miller, then the Senate minority leader, lead 13 Democratic colleagues on a wild ride across the Illinois border to delay passage of the bill.

During the battle over Act 10, Miller told Isthmus that he often thought about his late mother, the legendary Wisconsin Assemblywoman Midge Miller, whose early support for Eugene McCarthy and activism for peace and women’s rights helped change the course of national politics. “She’d been concerned for a long time about our people-centered democracy moving to corporate control and wealth control,” he said. “She would have been really excited to see what was happening in Wisconsin — the movement to restore our democracy.”

That movement suffered a series of setbacks with the failed recall effort against Walker and his re-election and consolidated Republican control in both houses of the Legislature, thanks to redistricting.

Miller once contacted the law firm Michael, Best & Friedrich to point out that the whole Senate — not just the Republicans — were the firm’s clients, and to request all records of the firm’s highly contentious and secretive work on redistricting.

During his 29 years as a military pilot in the National Guard, Miller told Isthmus he learned to be a consensus builder. “I was trained to listen to people who worked for you, get advice, and not to grab all of the decision-making power in the commander’s hands,” he said.

According to a statement released by Miller’s office about his retirement, he is most proud of “his effort to enhance responsible governance in legislative bodies.”

Through the Next Generation project, he worked as a facilitator “to guide legislatures in developing practices to enhance a legislative culture of trust and responsibility,” the statement noted.

That culture frayed some during Miller’s time in office.

Miller worked on a civility project in 2002 to restore better working relationships in the state Legislature that brought together equal numbers of Republicans and Democrats interested in fostering a more productive and collegial atmosphere in the Capitol.

“Unfortunately, many of the Republicans that were interested are no longer here,” Miller conceded in 2012.

“There are forces outside the building that pull us apart,” he added, including right-wing talk radio, Fox News and the American Legislative Exchange Council, a national coalition of corporations and Republican state legislators that pushes boilerplate legislation in all the states.

“The right is much more adamant that you cannot break ranks,” Miller said. “Compromise is viewed as a traitorous act. As long as elements out there are making that claim, it’s hard for even the best-hearted people to find common ground.”

But Miller never gave up hope for a return to a more civil, public-spirited Legislature.

“I’ve been here long enough to believe there is a public-service motivation in people that are here — you’ve got to find a way to tap into that,” he said in 2012.

Upon his retirement, he added: “Being an elected official is an awesome responsibility. As elected officials and as voters we need to do our utmost to make democracy work.”