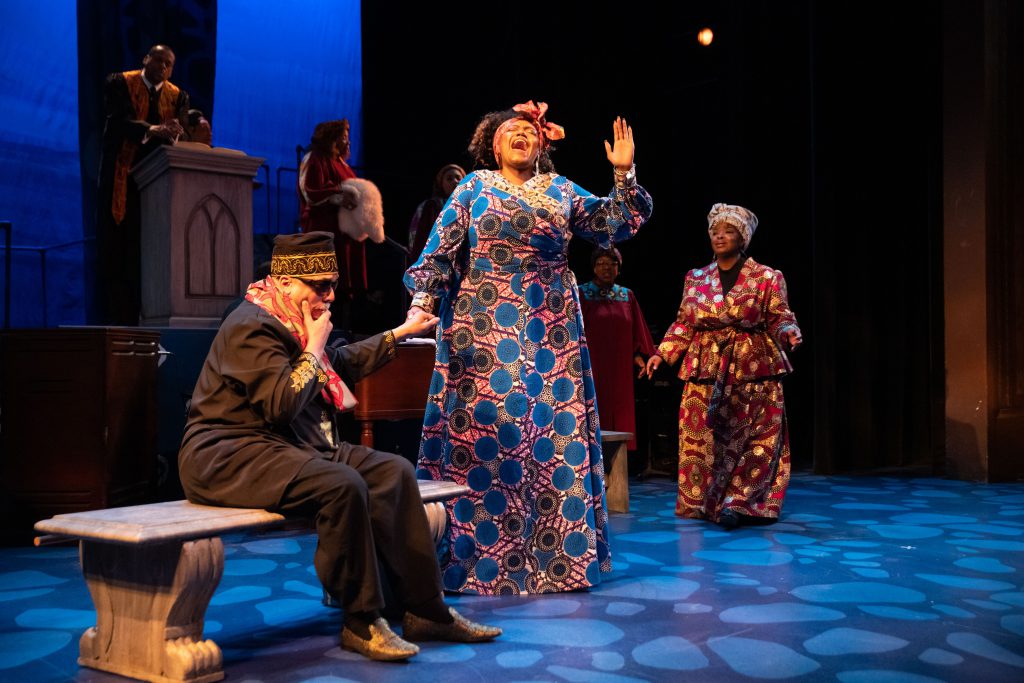 “The Gospel at Colonus” courtesy of Skylight Music Theatre.

Framed as a Pentecostal church service with formal robed choir marching slowly down the elongated steps and the messenger reading from the  biblical-sounding Book of Oedipus, unfolding lyrical passages and voices inside the head much like the Song of Songs, you might be excused for thinking The Gospel at Colonus bloomed on the New York stage in 1983 from black creators.

But it was steeped in several influences – gospel, delta blues, Greek legends — and conceived by experimental theater director Lee Breuer with ethnic master composer Bob Telson. It combines the final days of  Sophocles’ tale of a blind wanderer with the Pentecostal sense of a doomed spirit seeking the final glories of redemption. This musical feat blends two quite different worlds that both celebrate religious experience, of the Christians and the ancient Greeks. The poetry that unfolds and the formal methods are meant to challenge audience expectations.

The musical heights are most famous in gospel circles, but you could argue that the  language and story progression belong more to Sophocles. It is the blend of these intentions that have provided such a great showcase for black singers and will keep you engaged through January 26 at the Skylight’s fully utilized Cabot proscenium, chock full of singers and instrumentalists.

Director Sheri Williams Pannell, obviously deeply admiring of the production’s structure and classical dignity within a black performing tradition, has struck on a stately fidelity, with commenting choruses crowding in on the lead characters to taunt and guide them and a constant sense that this is pageant more than dramatics – with sudden abrupt revving up of the gospel engines. Costume designer Amy Horst provides an attractive middle ground of church and African attire.

I would argue that some of the dialogue passages lend themselves to more than stagefront declamation, but Pannell is right in her general approach. It is the voices that are the most important and she has brought some of the best around to the Skylight. This is a style of presentation that these voices can definitely handle and dominate.

The lyricism of the language speaks for itself in the musical numbers, with long phrases more than melodies, with soaring passages that lend themselves to elegant harmonies. Veteran baritone Byron Jones unfolds powerful classical phrases and delicate blends as the blind Oedipus. In the second act, his facial efforts to convey his anger at his son become too petty, but that is partly because of a first act when the slow thoughtful movement and sudden vocal explosions of the blind man seem to fit the character and heartfelt singing so perfectly.

Powerful notes and magnetism are provided by Curtis Bannister as Theseus and Kevin James Sievert serves expertly as the soaring higher voice Balladeer who introduces so many numbers, as well as providing those moments of humor and jive action required when the male chorus members cut loose.

When it comes to the female voices, I think director Pannell is playing with us. Just when we think there can’t be a more penetrating gutsy soprano than Raven Dockery as Ismene, just when we then think there can’t be a sweeter strong soprano that Tasha McCoy as Antigone, out from the chorus step any number of soprano solos for multiple rousing gospel finales that bring patrons to their feet – including such show stopping singers as Cynthia Cobb and Michaela Usher. It’s almost as if the director is telling us that, if needed, there are more voices in the wings.

And even then the Skylight is not done.  Music director Christie Chiles Twillie shows off her nine member band in bouncy solo after solo.