By Isiah Holmes, Wisconsin Examiner - Jan 20th, 2020 12:48 pm
Get a daily rundown of the top stories on Urban Milwaukee 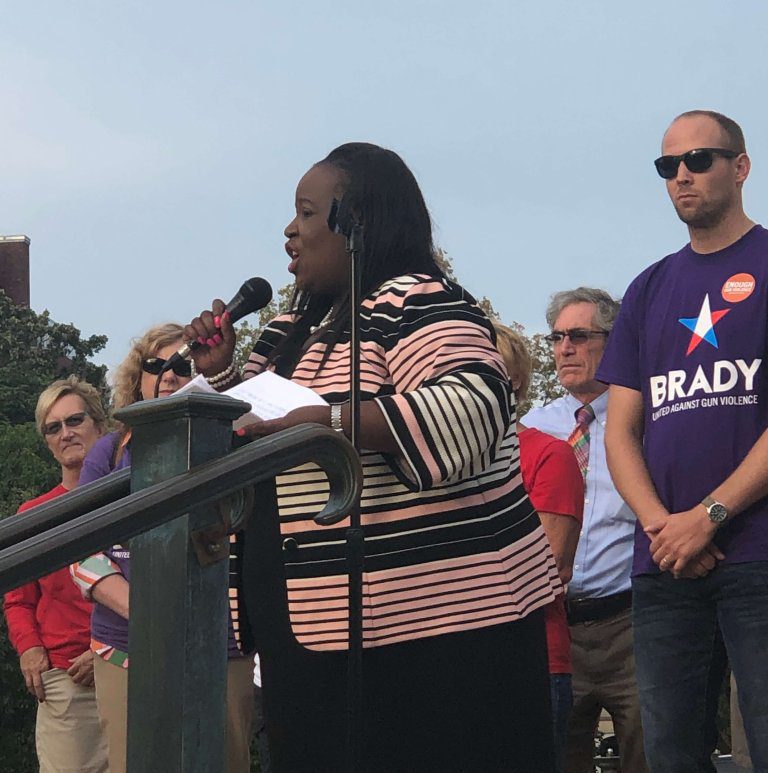 Over two years ago, Rep. Shelia Stubbs found herself at the other end of what she calls “profiling by proxy,” also known as “race out of place,” which is a form of racial profiling used against people of color who are going about their normal, everyday activities. It was during her State Assembly campaign, and Stubbs was going door-to-door in a Madison neighborhood, joined by her elderly mother and young daughter. She noticed a single Madison Police Department vehicle pulling up nearby, responding to a call by a resident.

“The caller, specifically in my case, called in and said that I was going door-to-door selling drugs, and I had a lot of people in my car.” Stubbs told Wisconsin Examiner. “I had my 8 year old and my 71-year-old mom.” When he spoke to them, Stubbs recounts, “the officer did not believe my mom. Also, I had to show three levels of validation, of identification, and my daughter had to witness this. That means I have to repair the relationship with law enforcement in my family.”

Her experience isn’t isolated. In fact, it’s a common story told by Americans from minority communities — especially when they enter mostly white neighborhoods, where some residents may feel they don’t belong. It’s why on Friday, Stubbs helped introduce legislation that aims to help the victims of unjust police calls fight back against their accusers through civil court actions. “We are going to hold people who do this type of behavior accountable by taking them to small claims court, for $250,” explains Stubbs.

Stubbs’ bill sounds similar to legislation introduced by Rep. LaKeshia Myers in December 2019, which sought to charge people who call police without suspecting criminal activity with a misdemeanor. Stubbs says her bill, however, focuses more on giving the victims of discrimination an opportunity for recovery, rather than just punishing the caller.

She hopes her bill will allow communities to examine the cultural biases that cause people to call the police because they see someone who looks different walking down the street. “Why did it happen?” Stubbs asks. “Had it been a white person in a white community, would we have treated that same way?” It’s not the goal of the bill to discourage people from calling the police. “We are saying, if you see something, please say something. But when you say something, don’t say something because of your own perceptions, or your own biases.”

‘Victims’ voices have never been heard’

In addition to introducing the bill, Stubbs wants to make her office a clearinghouse for victims of these sorts of calls. “We’re just asking that all these stories from across the state to be collected, and for my office to be the place of storage,” Stubbs told Wisconsin Examiner. “A part of what you will learn is, victims’ voices have never been heard. It’s an extremely traumatic experience.” During the Friday press conference announcing the legislation, Stubbs invited several victims, who included some police officers, to speak.

Her own experience, Stubbs says, sparked a conversation that has been part of her own healing. “What am I going to do? I can either stay there and be very dramatic, humiliated, degraded, or I can do something.” She says it’s important, in these cases, that people listen to the victims, who are often black and brown.

On the other hand, she adds, “We need validators who don’t always look like us.” Law enforcement agencies are challenged by having to respond to calls that waste their time, and damage their relationships with parts of the community. “It’s really making departments have discretion,” says Stubbs. Her legislation offers police new avenues of training to deal with false alarms.

Often, the people who regularly make these sorts of calls don’t understand the risks. “What folks don’t remember, and what they don’t know is for a person that’s black or brown, it’s life and death,” Stubbs explains. “If I react the way I may want to naturally, I could be killed. I could be injured. And people would never know my story. So I have to overthink, I have to over-process, I have to give maximum services to get minimum benefits. Even when I’m being degraded.”

Going forward, Stubbs is asking that Wisconsites who’ve experienced an unjust police call contact not only her office, but their own representatives. “These stories have to be told,” Stubbs says. “They have to see that sometimes it’s the person who they work with on the job, who’s a really good person. It has to be neighbors. They have to hear these stories.”