Protests and police maneuvers may be a taste of DNC 2020.

By Isiah Holmes, Wisconsin Examiner - Jan 16th, 2020 01:02 pm
Get a daily rundown of the top stories on Urban Milwaukee 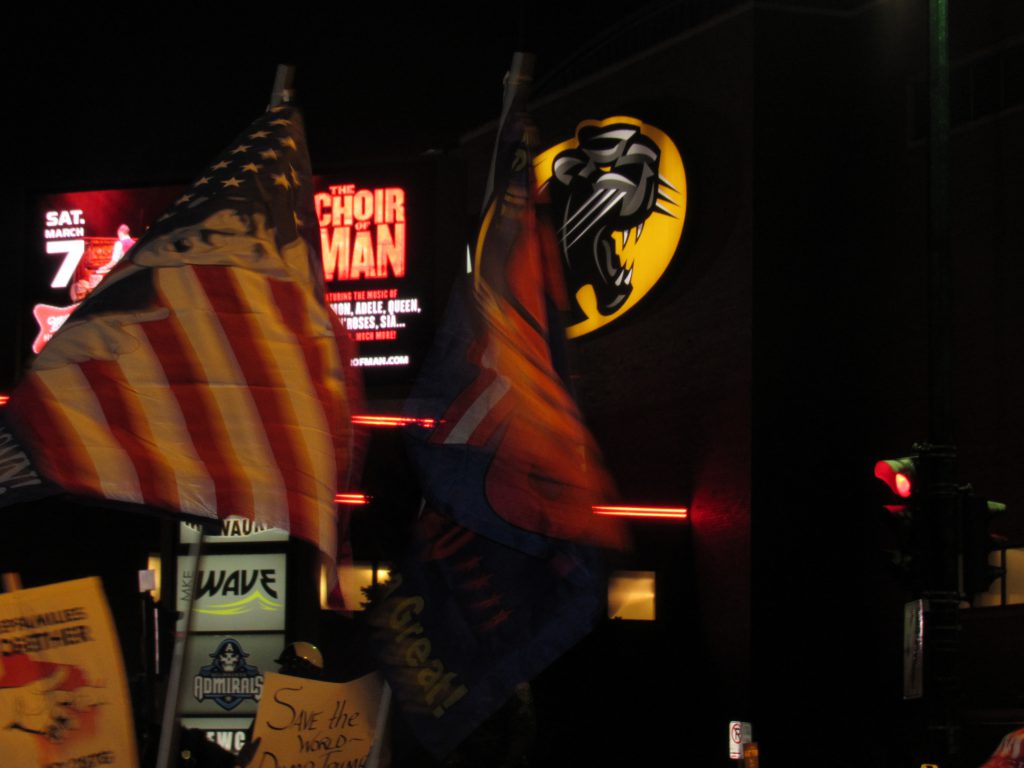 Thousands of people gathered inside the UW-Milwaukee’s Panther Arena Tuesday night, while hundreds more joined crowds outside President Donald Trump’s Milwaukee rally. Traveling Trump supporters mixed with protesters, many of them residents of the city of Milwaukee, who demonstrated for hours into the night. 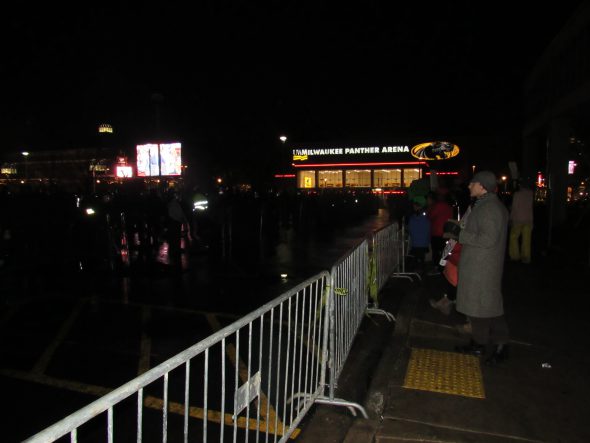 Trump supporters traveled to the rally from as far away as New Jersey and Florida, some to sell MAGA (Make America Great Again) hats, sweaters and flags.

“We just like the way the economy is going,” one Trump supporter named Anne told Wisconsin Examiner.

Antwon Wiliams, an African American Trump supporter from Columbia, South Carolina, said he feels President Trump has been good for the black community. Mainly, he explained, he credits the president with securing construction jobs for African Americans that he feels went to undocumented immigrants under President Barack Obama.

“We’ve always been able to get jobs with landscaping and painting. The Mexicans and the illegal immigrants came along, they come with their big fancy trucks, and they win all the bids and they undercut everyone on the bids because they can do the job twice as fast and very efficient, because they’re not paying anybody anything,” Williams said. Stating that, “we as blacks couldn’t keep up with that,” Williams added that this is the cause of higher crime rates in the black community.

He invoked independent voters in Wisconsin, while also making a show of pointing out journalists who were covering the event, deriding what he calls the “fake news”. As protesters were repeatedly ejected from the arena, Trump paused to say, “Get them out of here.”

“In Wisconsin, I don’t know if you’ve seen,” Trump told the cheering crowd, “independent voters, and voters, I think of all of the voters, including Democrats are moving over.” He pointed to Republican victories in the House as evidence that, even as impeachment articles move to the Senate this week, the country is uniting behind him.

Outside the arena, a few Trump supporters walked around, live streaming themselves on their phones, laughing and shouting, “He’s still your president,” at counter-protesters.

Antifa and anarchist-affiliated counter-protesters, wearing masks and marching with black flags, stalked the event’s periphery. Some of their group carried medical supplies in case of violent clashes. “We’re just some local anarchists,” one of the masked individuals told Wisconsin Examiner. “Donald Trump’s a fascist, and a bunch of his fascist supporters are here and we can’t have that,” he added. 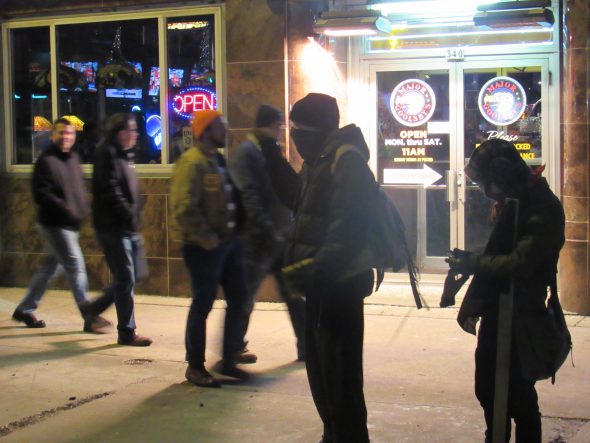 Antifa and anarchists wearing masks patrolled and demonstrated during the event. Photo by Isiah Holmes/Wisconsin Examiner.

Law enforcement officers from the Milwaukee Police Department, sheriff’s office, and others formed barriers and monitored the crowds closely. The doors to the Panther Arena were closed early, and streets were blocked off in every direction. When several dozen anti-Trump protesters began advancing on a large screen that was broadcasting the president’s remarks to the shivering crowd outside, police formed a line and moved garbage dumpsters and other objects to form an improvised wall. Protesters chanted “lock him up,” and held signs that said , “No more war,” and “Whose streets? Our streets!” Trump supporters gathered to watch and heckle the protesters, shouting “Four more years.” Police clad in riot gear formed another layer of protection, placing shields and body armor between the two factions.

Also keeping a watchful eye were legal observers from the American Civil Liberties Union (ACLU). Some 20 volunteers walked around the protests, watching for police interactions and signs with demonstrators. “Heavy police involvement, heavy deputy involvement, secret service,” said Emilio De Torre, director of community engagement for the Wisconsin ACLU. “We have seen deputies and police practicing more militarized lineups. We’ve identified other weaponry that the deputies don’t often have,” De Torre said. “Sheriff’s deputies weren’t responding to any questions of why they were doing this.”

“It’s our determination that they’re practicing formations for the DNC,” he added, including “different synchronized chants and commands.”

In addition to the police, the legal observers were also making note of the behavior of the protesters and counter-demonstrators.

“I’ve seen a lot of bloggers I’ve never seen before,” Mahoney noted, “A lot of people antagonizing the anti-Trump demonstrators.”

The rally ended without incident, and Mahoney sees hope for more peaceful outcomes in 2020. “At least I hope that there’s some common ground,” among the various political factions converging on Milwaukee, he said. Meanwhile, the city is bracing itself as it becomes the focus of a national political fight.

Check out what some of the rally goers had to say about the night, and why they were there at President Donald Trump’s Milwaukee visit: