Comstock Building Oldest of Its Kind?

1898 Milwaukee St. apartment building may be oldest of its size. For sale: $4.5 million 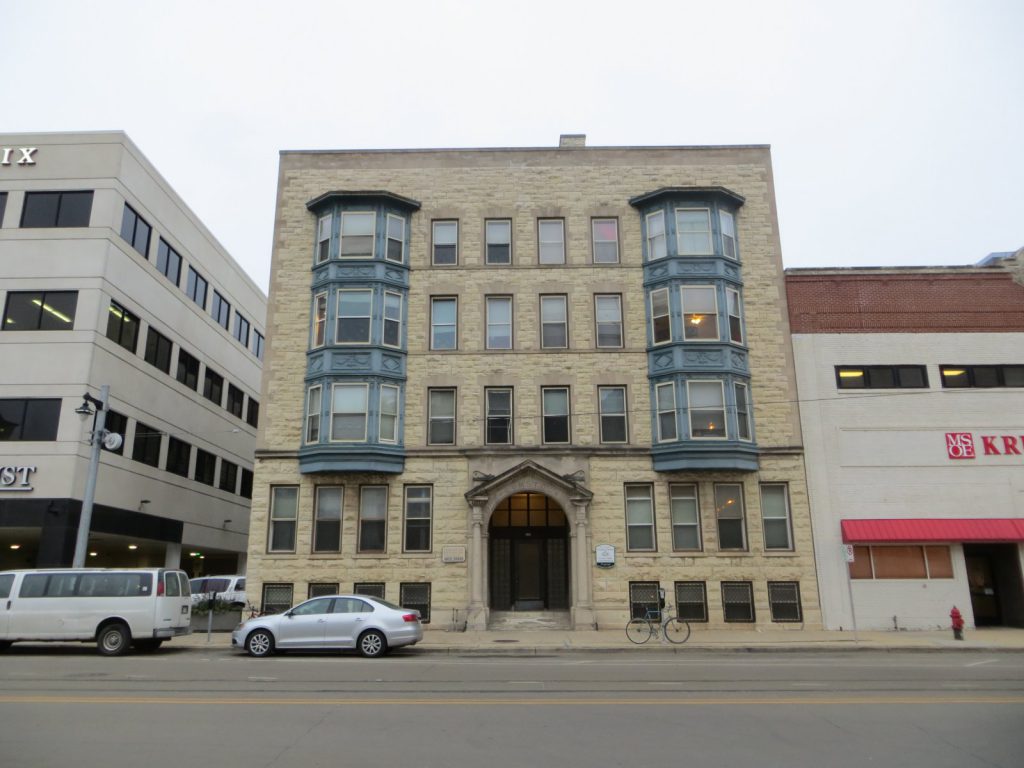 In 1886 Milwaukee attorney Everett George Comstock (1843-1922) ran for the Wisconsin Assembly representing the Prohibition Party in a field of four candidates. When the 2,939 ballots were tallied, Gustav Riemer of the People’s Party was declared the victor, with a respectable 1,214 votes. Not surprisingly, Comstock trailed the Democrat and Republican in the race, since Milwaukee and Prohibition were never allies. Somewhat surprising was the pro-Comstock turnout: he only got one vote, presumably his own.

Comstock went back to his law practice, which appears to have been successful. On May 10th, 1898 he filled out an “Application for Permit to Build Brick and Stone” for a 16-family, $25,000 flat at what was then 494-Milwaukee St. (Now 826-828 N. Milwaukee St.) It was to replace two small homes on what had once been a residential street filled with them. By 1910 many of the old houses were gone, replaced with multifamily dwellings bearing names like Grace Flats, Argyle Flats, Prinz Flats, Lorraine Flats, The Westmoreland and Irvington Court, all located within a few blocks of each other. Today all are gone, with the exception of the Comstock, which serves in its original purpose, although not as a residence for its original tenants, also all gone.

Milwaukee’s first apartment building was the 1882 New Hampshire Flats, at the southwest corner of W. Wisconsin Ave. and N. 6th St. Constructed by the great Edward Dwight Holton, it survived until 1950. The Comstock, at 122 years, may be the oldest remaining apartment building of its size in the city. The (now) 18 apartments are huge, with 60 bedrooms in total. There are now two two-bedroom units, eight three-bedroom units and eight four-bedroom units in the 26,416-square foot, four-story structure. Buildings like the Comstock, with their easy proximity to streetcar transportation were originally marketed to families. The larger units have a bedroom off of the kitchen, presumably for the use of a servant. In recent years it has been a popular dwelling for students at the nearby MSOE University. The studios of the school’s WMSE-FM (91.7 FM) radio station are next door to the south in Krueger Hall. There is a station of The Hop streetcar right outside the door.

The property is being marketed by Anderson Commercial Group as a “student housing investment opportunity,” according to the sales brochure:

Rents of $450-$490/bed will not remain if the building fetches its asking price, which is nearly triple its assessed valuation of $1,564,000. Nor, at that price, is it likely to remain student housing. For the handsome stone building with its bay windows to regain its original status as upper middle class housing, millions more would have to be spent on upgrades. Even without upgrades, the mortgage alone would run nearly $600 per month per bedroom. Perhaps the value lies in the land below, and its potential as a building site.

The building is owned by Tristan Estates, LLC. of rural Marion. The firm is registered to Mary Gillig; her husband Christopher Gillig is a dentist and the owner of Friendship Valley Dairy in Clintonville. Tristan Estates owns over 25 buildings in the Marquette, downtown and east side areas.

A century ago, in 1921, the Comstock had already lost some of its allure, judging from the relatively modest occupations of its tenants. The automobile had opened up the suburbs for development, and the upper middle class packed its bags into the trunk and headed to a home with a garage.

Apartments 1 and 3 were occupied by Albert E. Ladd, a timekeeper for A. H. Weinbrenner Co. Clara was his wife.

Mrs. Ida Sturtevant, the widow of Van P. Sturtevant was in Apartment 2.

Everett C. Smith, in the wholesale lumber trade, was with his wife Elizabeth in Apartment 4.

William A. Oswald, a steward, was in Apartment 7. In Apartment 8 was Michael E. O’Neill, whose job description was “Helper.” In unit 9 was Katherine McCauley, a waitress. Mrs. Margaret Phillips resided in Apartment 10, while William F. Heath, an Inspector with the Western Weighing & Inspection Bureau, lived in Apartment 11. His office was in room 520 of the Chamber of Commerce Building, which is today itself an apartment building. Unit 12 held Mrs. Rose Sewald, a sales lady for the Boston Store. Frederick Mayberry, an engineer, lived in unit 14 with his wife Mary. Mrs. Helen C. Clifford (the widow of John) was a cook, and lived in Apartment 15. Merritt D. Thompson, an electrician, and his wife Nellie S., lived in #16. Apartment 17 had Bessie Goranson, the widow of Anton.

It seems unlikely that the many widows in the building were knocking around in huge apartments unaccompanied, and may have instead rented the spare bedrooms, perhaps on a casual basis.

By 1949 the building was owned by Herbert Wuestoff, who received approval to convert Apartment 3 into one 4-room dwelling unit and 2 sleeping rooms. In 1951 Miss June Bahr ran a beauty parlor from the first floor northeast corner unit, facing the alley. Other units had dual apartment/ rooming house status. By 1962 the building was owned by Byron Swidler and Elliot Shafton. By then the building to the north had been torn down, and a 10′ x 23′ billboard was hung over what was already a ghost sign on the north wall.

In 1968 the building was in the hands of Sidney Lieberman. A complaint was lodged against the condition of Apartment 16: “Please make an inspection of this apartment. Possible interior in deteriorated condition and filthy; door is broken and not proper ventilation.”

The inspector filed his sad report: “Apt. in question occupied for 20 years by an elderly gentleman who was recently taken to nursing home by relations. Condition of apt. due generally to occupant’s own neglect. Ventilation is satisfactory and management is in the process of renovating apt. for rental.” The occupant had been 80-year old Theodore Dontie, also known as Salvatore Dentici.

In 1979 Lieberman was ordered to “Repair entire rear porch and stairway. This stairway and porch is a second means of exit from the apartments and is in a hazardous condition. Columns, floor deck, railings, stringers and treads are rotted and must be replaced.” After the job was done, the inspector “Informed owner that this would probably be last time that porch could be repaired.” The current fire escape and stairway, which is a considerable structure, is composed entirely of steel, and has stairs leading straight down to the alley.

The city got mighty picky in May 1980: “you are hereby ordered to vacate apartment created by occupying the former office on the 1st floor southwest corner of the building, This is an extension of a non-conforming use of building for residential purposes.”

What the future holds is uncertain. But if the property realizes anywhere near the $4.5 million asking price, it would likely be for its redevelopment potential, possibly to be replaced by a much larger and taller structure. 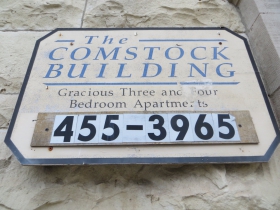 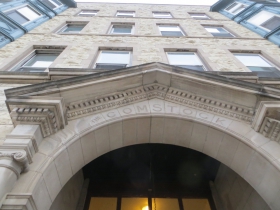 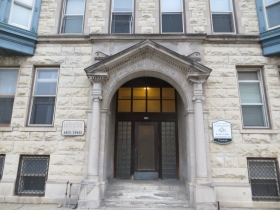 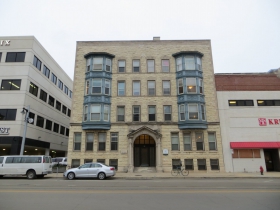 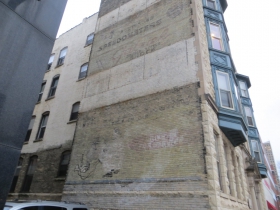 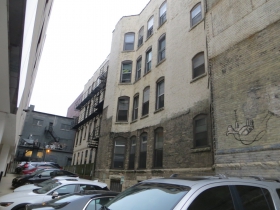