Dark Horse Is So New Yet So Old

South Side bar opened in December with new style in tavern dating to 1880s. 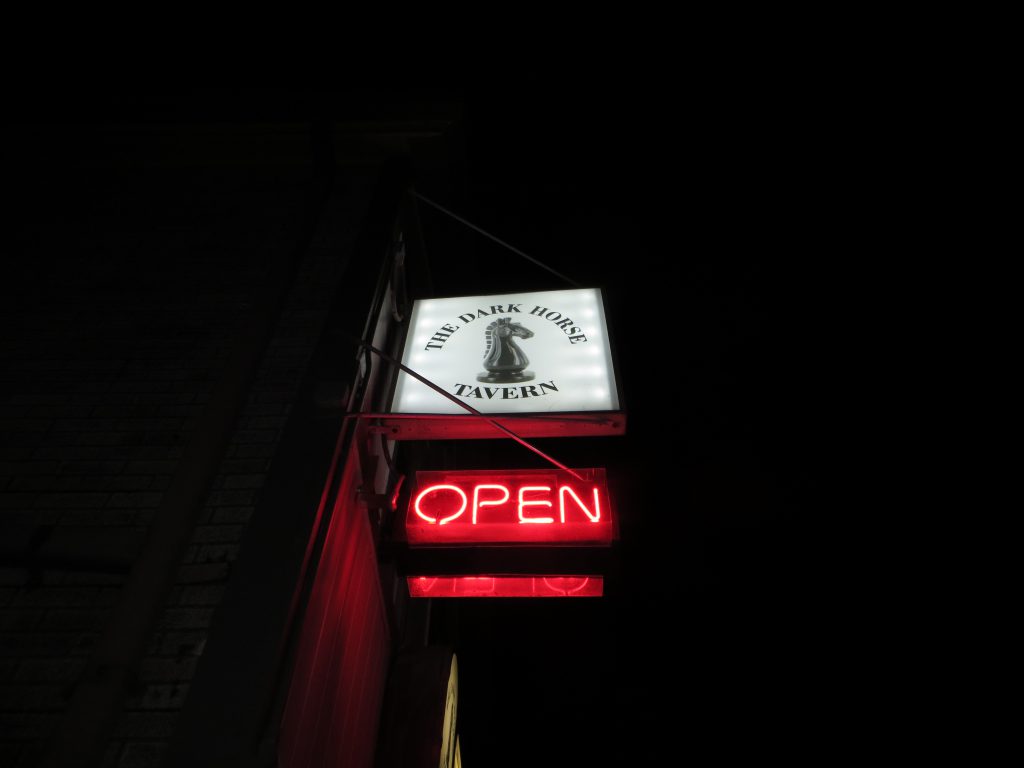 With the presidential primary season approaching we’ll soon learn if any of the candidates is a “dark horse” — one that breaks from the field and unexpectedly wins. Perhaps not, but when the Democratic National Convention is held in Milwaukee this July there is certain to be one Dark Horse in town, and you can find it at 1517 S. 2nd St.

The Dark Horse Tavern opened in December, 2018, under the ownership of Monica De Palma, who had been searching for a location on the South Side. De Palma also operates Monica’s on Astor, located in the basement of an 1850s Yankee Hill building that she owns. (See Bar Exam: Monica’s on Astor Replaced former Bordello, December 8th 2015).

She wasn’t looking for a large space — just something big enough to unload a bunch of stuff left over from her brother Nick De Palma‘s former Nick’s Place (since demolished). The haul includes a prized velvet painting of Captain James Tiberius “Jim” Kirk (2233-2371 R.I.P.) It stands out from the beer and liquor signs that constitute the principal decorative motif of the saloon’s interior and exterior.

De Palma is the sixth person to operate this place since the beginning of this century, some 233 years before the birth of Captain Kirk.

The Half Time Executive Sports Bar was replaced in late 2001 by the Monkey Bar, which operated until 2008. Then it became the Bomb Shelter, a haven for fine beers and a repository of fine vintage breweriana. It operated until the owner, Greg Landig, died of a heart attack in the bar in 2012. From 2012-2015 it was The Parlor Bar, and then it became Junior’s Hook, operated by Matthew “Sherm” Sherman. He had been a bartender at Champion’s Pub, where Monica De Palma has held her birthday celebration, so the tavern’s availability naturally came to her attention. Tavern owners, bartenders (and many of their customers) travel in a circuit in this city, often ranging far from their home neighborhoods, yet gathering in similarly congenial spots. The Dark Horse Tavern is such a place, so we galloped over to take a victory lap around the place.

In a history-packed 2017 Bar Exam: Junior’s Hook, we noted that the structure here predated the 1880s introduction of building permits, so its date of origin is unknown, other than that it was originally a residence. In 1892 a kitchen was added, and the lower level became a bar. Looking at the building, it is possible that the old house was jacked up and the lower level constructed between it and the cellar. There have been numerous alterations over the years. The exterior today is a commercial storefront, virtually all window and door, and brilliantly lit by beer signs. A projecting sign with black lettering on a white background announces the tavern’s name. The dark horse logo is a representation of a chess piece.

The first thing you encounter when inside are the stairs leading up to the bar level. Until 1940 they projected out to the sidewalk. The bar is located along the north wall, and is backed with a mirror, lots of liquor bottles and the portrait of Captain Kirk. He is flanked by two velvet paintings of dark horses. The beer coolers are plastered with stickers, a holdover from the Junior’s Hook era, and possibly before. The beers now pour from an ancient brass tapper that once dominated the bar at the Y-NOT II, which is run by Monica’s dad, Tony De Palma. Grab a beer and head back to a game area that is yet a couple of more stairs up. Here the theme continues with a framed movie poster for Dark Horse, which was “un film de Dagur Kari.” The 2005 Danish release won two Bodil awards that year, how about that! Another poster for a different Dark Horse movie is beside it, advertising the 2014 New Zealand production that also won many awards in its native land. Yet another poster promotes the Dark Horse Catalogue of the work of George Harrison, featuring the former Beatles‘ work from 1976-1992, which was the Baroque era as far as Captain Kirk was concerned. Wouldn’t you know it? Another sign tells us that Dark Horse Tavern is now serving Dark Horse wine-in-a-can at $8 a pop.

The room is outfitted with electronic dart games and other amusements. If you head back down to the bar room, you will find a pair of doors on the south wall, labeled “Mabels” and “Lukes.” This may have caused some confusion in the past, since “Women” and “Men” were later written on the signs in a different hand. To the left hand of Luke you will find a vintage Lakefront Brewery Riverwest Stein Beer metal sign. Look for a light-colored Cream City brick there that conceals a surprise. It is magnetic, and is a handy place to hang your keys, or toss a bottle cap.

The Dark Horse Tavern will be celebrating The Holidays are Over Party, Saturday, January 11th, 5 p.m. – 2 a.m. 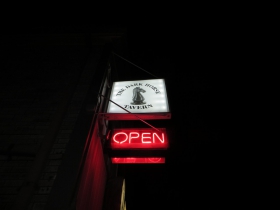 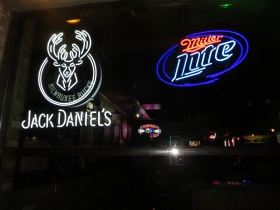 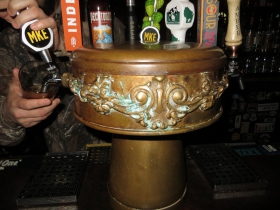 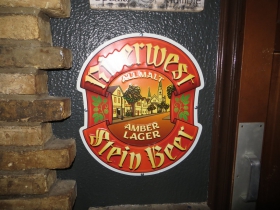 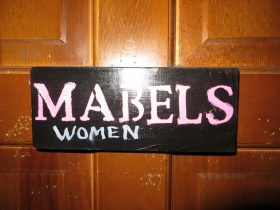 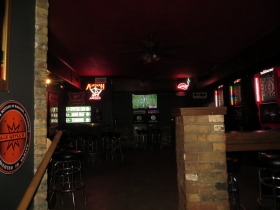