By Isiah Holmes, Wisconsin Examiner - Jan 7th, 2020 11:53 am
Get a daily rundown of the top stories on Urban Milwaukee 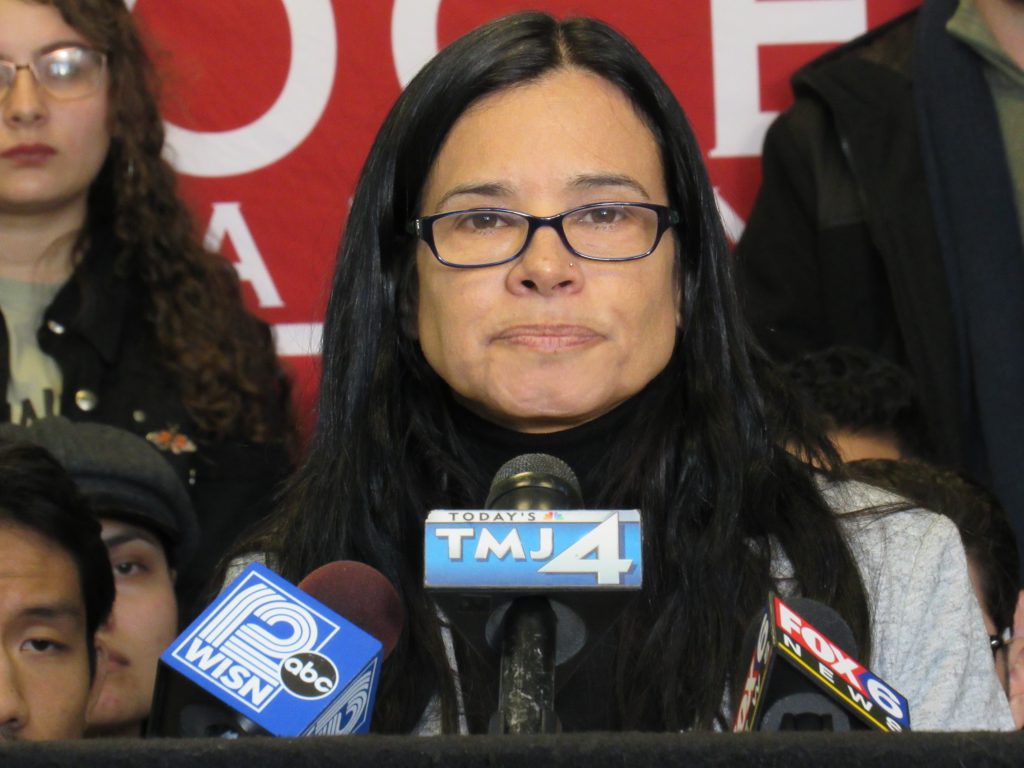 With a surge in federal law enforcement agents and funding expected for Milwaukee, immigration activists are concerned about whether the Department Of Justice (DOJ) Operation: Relentless Pursuit will also involve Immigration and Customs Enforcement (ICE). This new initiative, which the government says will target violent crime in seven cities nationwide, was announced a day after non-collaboration with ICE policies were instituted in Milwaukee.

The policies, which require a judicial warrant before Milwaukee Police Department (MPD) officers can collaborate with ICE, were pushed by the immigrant advocacy group Voces de la Frontera for over a year.

Recently, the group celebrated the return of a man to his family who had been arrested by ICE and detained for months. Then, during the holiday season, Operation: Relentless Pursuit emerged. The operation will include MPD, though it’s unclear what the scope of the local police department’s involvement will be.

“I definitely had concerns about the program,” executive director of Voces de la Frontera Christine Neumann-Ortiz told Wisconsin Examiner. “We need to ensure that the implementation of a program such as this is very transparent, and accountable to community organizations and elected officials.”

Neumann-Ortiz says citizens need to “make sure that those programs are not going to be a force of oppression, as opposed to things that are going to encourage reporting serious crimes such as trafficking, that do need community trust and intervention.”

Kenneth Gales, of the US Attorney’s Office for the Eastern District of Wisconsin was unable to confirm whether ICE has a role in the operation. “At this point we cannot provide more information about the operational details in order to protect operational security,” Gales emailed Wisconsin Examiner. ICE operations have increasingly come under the spotlight since President Donald Trump took office. Milwaukee’s city hall has been the scene of repeated rallies and protests, with activists demanding that officials protect immigrants and their families.

Neumann-Ortiz is concerned about what she describes as, “a tremendous increase in abuse of power and discriminatory practices,” by the Department of Justice, including the Trump Administration’s targeting of DACA (Deferred Action for Childhood Arrival) recipients— undocumented immigrants who entered the country as children. Despite undergoing  thorough background checks, DACA recipients live in fear  under the current administration’s policies.

“Which is exactly why we passed the policy that holds ICE accountable to a higher standard in it’s conscription of local police resources,” says Neumann-Ortiz. She urges public officials to acknowledge what has become, “a city-wide demand that we use resources to address the root causes of inequality, and suffering, and poverty.”

With the Badger State already dealing with the effects of mass incarceration, Neumann-Oritz says, “locking more people up is not an answer.” Rep. LaKeshia Myers expressed similar criticisms of Operation: Relentless Pursuit, and urged the funding of Milwaukee’s existing preventive community programs rather than throwing millions more into law enforcement. In October 2019, dozens of community members called on the city to invest in community programs, objecting to a budget that allocated half the city’s resources to the police.

The Department Of Justice, however, appears to have different views on what steps to take. During the Dec 18, 2019 press conference announcing Operation: Relentless Pursuit, Attorney General William Barr called these kinds of strategies “our principal tool in addressing violent crime.” Later on, Barr commented that “there is too much anti-law enforcement rhetoric. Or not sufficient respect for police officers and law enforcement officers, and the job they do.”

A month earlier on Nov. 27, Deputy Attorney General Jeffrey Rosen wrote a blog criticizing “a small but troubling number of state and local prosecutors,” who are, “vowing that they will not enforce entire categories of core criminal offenses, as part of a misguided experiment in ‘social justice reform.’”

Rosen went on to blast a district attorney in San Francisco who won’t prosecute “quality of life” crimes such as public urination and prostitution. In Wisconsin, Milwaukee and Dane Counties have tried avoiding the prosecution of less serious cases of cannabis possession. Localized immigration policies have also become a big fight. Though groups like Voces de la Frontera push for non-collaboration policies between ICE and local police, bills have been introduced to punish locales which pass “sanctuary” policies by reducing shared revenue.

“Contrary to the belief that inspires these so-called social justice policies,” Rosen wrote, “the ‘system’ is not broken.” He goes onto state, “those who still believe that certain criminal laws hinder ‘social justice’ should vote for a legislature, not a prosecutor, to address their concerns. Outright non-enforcement of the law is an affront to the separation of powers.”

Neumann-Ortiz argues that the roles of legislators enacting policies and police enforcing them go hand-in-hand. “Especially now that we’re in an election year, we definitely want to know what our elected officials are doing to use resources to lift people up. And to promote public safety, and that there has to be transparency,” she told Wisconsin Examiner. “Without that, there’s a problem.”

In the case of Milwaukee, Neumann-Ortiz applauds the independence of the city’s Fire and Police Commission in implementing Voces de la Frontera’s policy recommendations for the MPD. “It was a good policy and we had to organize to win it,” she explains. “I think that it was more around accountability, making sure our local resources weren’t being conscripted into policies which were going to be harmful to the community.”

The immigration activist urges, “we need to continue to be vigilant in all of these joint operations.” It was one of many lessons Neumann-Ortiz and her fellow organizers learned during their fight for non-collaboration policies with ICE. “We needed to build out a campaign to hold all mayoral candidates, and all common council candidates for office accountable to, ‘How are you going to ensure that we have a strong Fire and Police Commission that is going to give good oversight and listen to the needs of the community?’” Recently, the FPC has come under scrutiny due to reports of dysfunction among its ranks.

“That is a question to all of the mayoral candidates, and all of the common council members,” says Neumann-Ortiz. “It just kind of highlights this larger question about, especially when you have these joint operations and how our local resources are being used, we do need to ensure that there’s transparency and accountability.”