By Melanie Conklin, Wisconsin Examiner - Jan 7th, 2020 12:27 pm
Get a daily rundown of the top stories on Urban Milwaukee 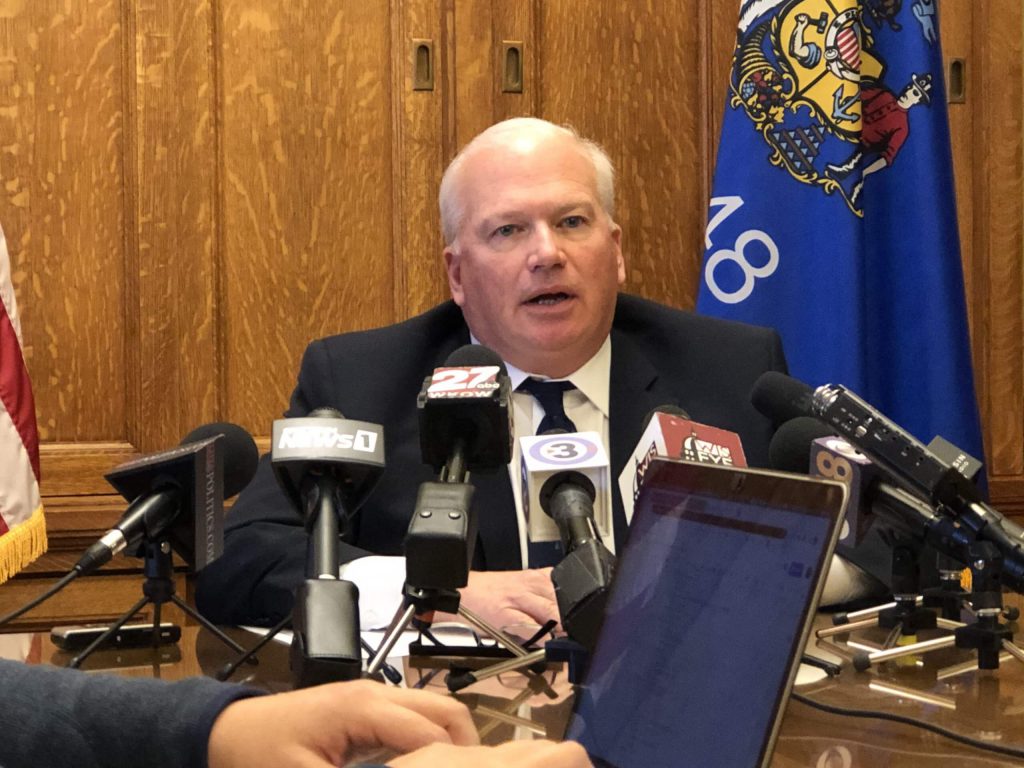 In the corridors of the state Capitol, 2019 was a painful struggle given the new dynamic of split-party control that Wisconsin had not experienced for almost a decade. And before the Assembly and Senate convene in mid-January, there doesn’t seem to be a lot of hope on either side that great things will happen amid the highly political hype leading up to the elections of 2020.

Legislative Republicans plan to meet only in January and February, maybe March. So the limited window to find any consensus and move on bipartisan public policy could shut quickly.

A key question is whether legislative/executive branch meetings that Senate Majority Leader Scott Fitzgerald (R-Juneau) indicated would be happening shortly after the holidays will produce any bipartisan agenda. In a late-December press conference to discuss  the upcoming year, he didn’t voice much optimism.

Fitzgerald lamented that Republicans feel shut out, meeting with Gov. Tony Evers just three times in 2019, he said, and not having someone they feel they can work with in his office. (They have been meeting with Evers’ chief of staff Maggie Gau as their liaison, which Fitzgerald does not view as productive.)

“It’s been kind of a rocky road, trying to find that person in the administration where we can … come to some better understanding,” he said. But in talking about January meetings with the governor, Fitzgerald indicated that  they will try to work together in “mapping out some stuff that we’ve got some common ground on.”

He cites public safety as one area where there was progress in 2019. “We did a lot of public safety, a number of different bills that passed. We also did trucker education relating to human trafficking. We did some bills on rape kit processing reform. We’ve done two OWI bills already this year— there’s more to come on the January calendar. We did the benefits for fallen officers.”

Senate Minority Leader Jennifer Shilling (D-La Crosse) says the high point for her in 2019 was having Evers in office and setting up better relationships with educators, state employees and also pushing such priorities as declaring 2019 the year of clean drinking water. Her role has changed quite a bit with a Democratic governor, getting high-profile support and a bully pulpit for Democratic priorities under Evers.

“Republicans became accustomed to only having to work amongst themselves,” says Shilling. She says legislative Democrats got used to trying to play goalie without any real power to stop shots. Now Evers is the goalie and Republicans have to work with them to get anything to his desk to get signed.

“I wish there was more of an appetite for Republicans to do the people’s work on issues that have bipartisan support like closing the dark store [tax] loophole and passing the homelessness package, which is held up in the State Senate right now.”

If someone were to hand Shilling a magic wand that would allow her to single-handedly pass one piece of legislation, she says it would be to accept the federal Medicaid money to expand health-care access in Wisconsin.

“I would protect [coverage of] pre-existing conditions and I would look at ways that we could reduce healthcare, prescription drug costs … I would look to have a magic wand to tackle healthcare costs here in the state.”

Immediately after that thought, Shilling cites a close second wish — more funding for education, and special education, although she expresses relief that as a life-long educator, she sees Evers watching over that issue with particular interest and vigilance.

Most urgent, Shilling says, is addressing gun safety. Having lost both of her parents to gun violence, it’s personal for her and even harder to accept the ongoing gun violence and mass shootings with no responsive action. “And, you know, it’s not a matter of if something will happen again, it’s just a matter of when,” she adds.

Asked about the low point, she talks about Republicans showing vindictiveness in the lame duck session, curtailing the incoming governor and attorney general’s powers, and the Senate GOP refusing to confirm many of Evers’ cabinet members.

“I’ve been disappointed in the level of pettiness that we’ve seen towards the governor and his administration, really,” says Shilling. “It started with lame duck and we’ve had that carried over into things — it was kind of that hangover.”

Other examples she cites were the firing of Ag Secretary Brad Pfaff by the Senate GOP, what she describes as undermining the governor’s agenda.

What’s left on the GOP agenda?

Much of what Republicans wanted long-term they were able to do unilaterally the past eight years — from crippling unions to enacting corporate and individual tax breaks. But there’s more to do, says Fitzgerald.

One of his top priorities is to enact further tax cuts in 2020, particularly focused on the property tax. He says that he’s done 130 events traveling around the state, from pancake breakfast to chili cook-off, since he announced his 5th Congressional District run three months ago. At those, he hears frequently about property taxes rising.

Fitzgerald attributes much of the increase to communities passing referenda to fund their schools: “People are concerned about a bump in their property tax bill that has been generated by decisions at the local level.” He adds that if there is any revenue available when the Legislative Fiscal Bureau puts out its annual estimates, that’s where he wants it to go “before we leave town.”

While he’s critical of Evers, Fitzgerald also expresses some “frustration” with Assembly Republicans. He steadfastly refused to bring forward bills that came out of an Assembly study committee on addressing homelessness. In fact, he seemed to regret the funding had even been allocated in the recent budget. He believes the Senate did not have sufficient input, and the price tag — at more than $7 million — was too high.

He’s not sure if he’ll support bills coming out of other Assembly task forces on adoption and water quality either.

“Many of the task forces that the Speaker puts together, kind of fall into that category. So it’s different. It’s not like running a bill through the legislature,” says Fitzgerald. “It’s really hard to get the momentum and create the momentum to get the votes for that  [homelessness] package right now. I think it’s because of the way it was developed.”

As for the secretaries, Fitzgerald says they’ll vote on some each month of the coming year, but he wishes more of them had come from the legislature, noting that it was easy to get Revenue Secretary Peter Barca approved because they had all worked with him.

Here are a few things neither side expects agreement on this year: gun control, addressing climate change, Medicaid expansion, bipartisan redistricting or voting rights’ expansion. And while Republicans, including Vos, are moving on medical marijuana legalization, Fitzgerald is emphatic it won’t happen on his watch.

Stopping big things from happening is the order of the day. Republicans do it by refusing to forward legislation and Evers’ policy is to only sign bills that have attracted bipartisan votes into law.

But there are a few things where both sides have shown a willingness to find common ground, for example a solution for the juveniles incarcerated at Lincoln Hills where neglect was rampant, OWI bills and bills to combat drug addictions and the opioid epidemic. While Democrats want to go further in dealing with PFAS, lead and other contamination of drinking water, Republicans have forwarded bills that take steps in that direction.

Shilling puts a strong emphasis on economic and workforce development throughout Wisconsin, an area Republicans have also shown an appetite to address.

And any true solution to rising property taxes that come from local government referenda where communities see the need for more money for schools — addressing education shortfalls far beyond what the budget did last year would need to be on the table for it to be successful. The state picking up the costs of technical colleges was another possibility Fitzgerald mentions.

Fitzgerald also believes there can be some long-term solutions to transportation funding, given that he found former Gov. Scott Walker was not open to changes in that realm, while Evers ran on “fixing the damn roads.”

So while year-end interviews done by legislators and the governor displayed more weariness than hope for moving major state business forward in 2020, both Dems and the GOP have a narrow window over the next two to three months for accomplishing measures on behalf of Wisconsinites before the legislators go back to their districts to campaign and the sides are pitted against one another with a national focus on Wisconsin as the potential swing state and the hype of the Democratic National Convention taking place in Milwaukee this summer are sure to heighten partisanship.

It has to happen now … or likely not for at least another full year.