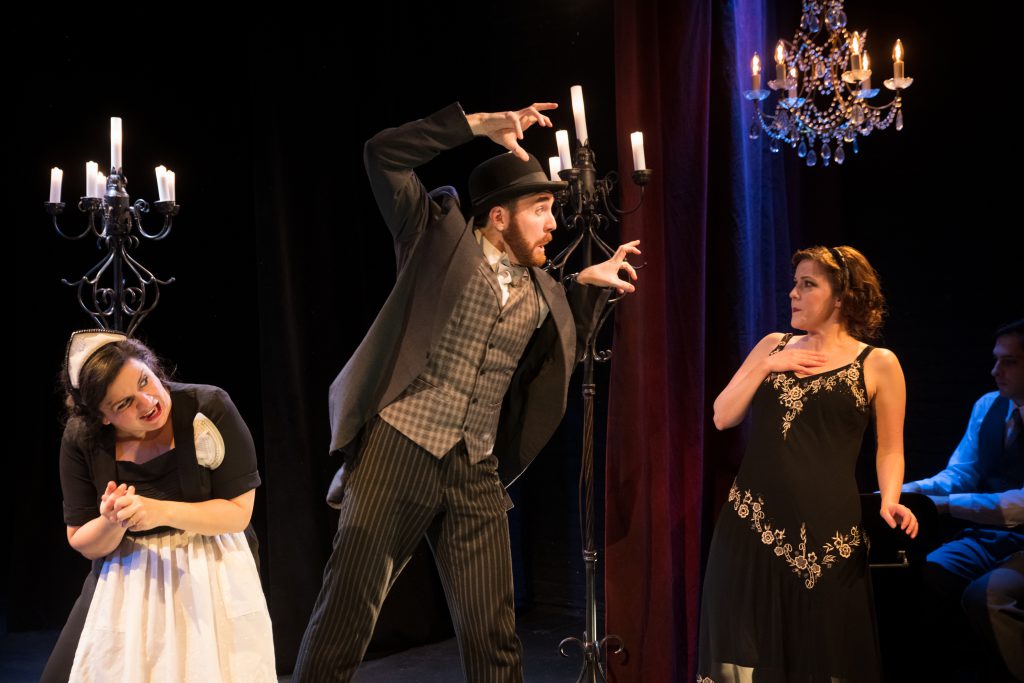 Over the decades, Skylight Music Theatre has done some 50 odd productions of Gilbert and Sullivan operettas. None, I dare to say, were odder or more audaciously invigorating than the current Ruddigore (or the Witch’s Curse) enjoying a truncated run not in the Skylight’s normal proscenium Cabot Theatre, but in the 99-seat Studio Theater, which means you’d better rush to the Broadway Theatre Center before January 19 as there are far fewer tickets than usual.

Ruddigore is the least known or performed of the G&S canon, not because Arthur Sullivan’s musical nimbleness is any less than lively or W.S. Gilbert’s word play any less amusing. In fact, his fun with British Isles place names has never been grander. But the plot gimmickry! Elements of a curse on every Murgatroyd baronet down through the ages and the personality confusions of generations of lovesick relatives signal a Gilbert comic plot fetish running amuck. This could do a production in.

But not this one – it seems wonderfully simple and Halloweenish. It’s been shortened to 90 minutes, focused and imagined as a Victorian Gothic parody by way of silent movie backgrounds. The Murgatroyd ghosts performed by music director Tim Rebers spring from a projection screen which is also where the story progression unfolds in Lon Chaney-era titles And while there is Rebers on keyboard – plus various musical instruments used as incidental cleverness — Rebers is also the comic maestro conductor who cleverly transposed the score as an a cappella orchestra of the fine voices assembled mainly from the co-producer Milwaukee Opera Theatre (MOT) as well as past Skylight productions.

Every voice blends in operetta stylings, while the stagecraft envisions an acting manner of melodramatic broadness that fits the antics and the goofy home-grown (but expertly polished) staging. Co-directors Catie O’Donnell and particularly Jill Anna Ponasik (whose sense of impish found music has become well known to both MOT and as an associate at the Skylight) assemble the singers as prancing choruses and commentators, used as both comic foils and furniture along the way. Several singers step in for powerful solo turns, but all also serve as orchestral anchors, creeping toward the audience, fluttering backwards or breaking apart into trios and quartets.

We cannot pretend that this is not different than the full orchestration usually delivering Sullivan’s music (which has often in theater been reduced to an instrumental ensemble). But the use of voices as harmonics or as percussive tra-la-las adds a particular charm and speed, conveying the coloration highlights of Sullivan’s music. Nor should we pretend that the mannered D’Oyly Carte school of presentation is visible in any fashion but a sly mockery and spin room of operetta expectations. And I say Bravo!

Perhaps it “really doesn’t matter” except to a few patter purists, but this method exposes the slightest overlaps in the patter exactitude for which Gilbert was famous. We have group voices and undertones doing rhymes that are usually set apart as pristine jewels. Here they plunge into the mischief. That’s a revelation you realize after being carried off by the stage energy and skill of the creators.

The production elements are built around standout moments as when the rear projections come alive or clinging roses are passed among the ensemble or shadows on the wall are somehow engaged in more lovemaking than the couple in the foreground. Molly Mason has provided costumes with the faintest echoes of Victorian house party while choreographer James Zager makes movement seem to fly naturally out of the action. Nathan W. Scheuer is responsible for the lighting and projection design.

Doug Clemons provides a constant cheerful comic veneer and Buster Keaton agility as the lovesick Robin while the heartless ingénue Rose is amusingly grinned and magnificently sung by Susan Robinson. Her purpose time and again, it seems, is to stagger the audience with her high notes soaring out of the crowd onstage.

As Mad Margaret, the thwarted lover in the horror wig, Diane Lane is once again the most powerful mezzo in captivity, while comic flourishes and big notes are also delivered by Karen Estrada as the most intrusive man servant a baron ever had.

All these performers reveled in the comic facial takes as well as the singing. And while there is still room to further develop the acting methods there is nothing to fault in the musical timing and strength of Adam Qutaishat and newcomer Shayne Steliga as the sidemen of the romantic antics. Also musically exceptional and perfect comedic foils were Sandi Lash, Katie Gruell, Edward Lupella and Megan McCarthy – all of whom should hang this outing prominently on their resumes. 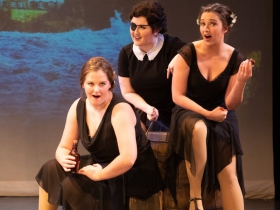 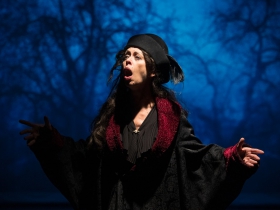 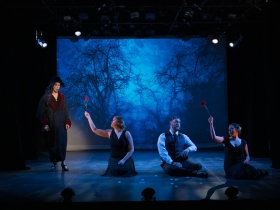 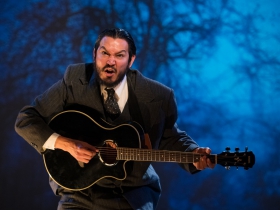 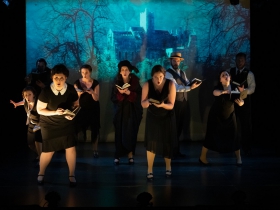 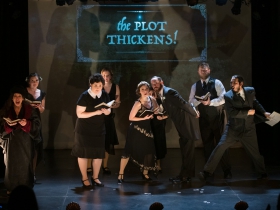