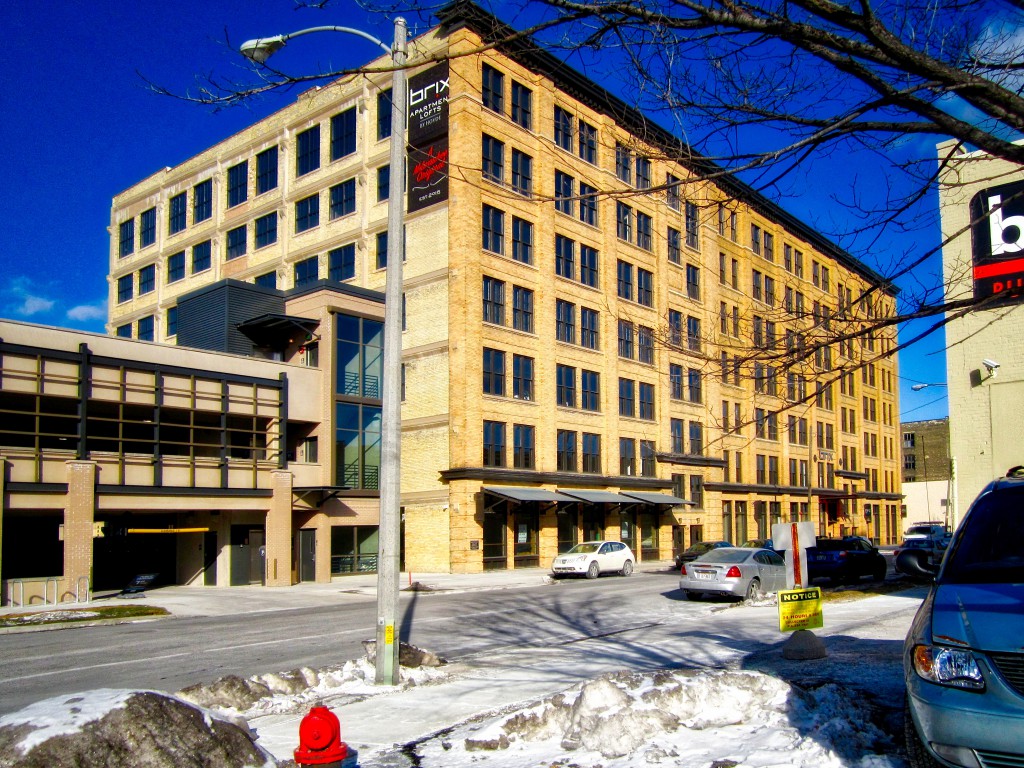 Twenty tons of candy were made each day in this seven-story building at 408 W Florida St. The former home of the George Ziegler Candy Co., it was recently remodeled into upscale housing and is now known as the Brix Apartment Lofts. Carl A. Swanson photo.

Although its reputation has more to do with brewing than bon bons, Milwaukee once ranked among the top five candy-producing cities in the United States. Even in the bleak years of the Great Depression, the city′s 16 candy factories employed 2,000 people with annual sales of $7.8 million. One of the 16 firms, the George Ziegler Candy Co., was founded before the Civil War and lasted into the 1970s. Its annual production averaged 12 million pounds, the Milwaukee Journal noted in a 1920 article. That’s about 20 tons of candy produced each working day. This is a story about chocolate. And a fire hose. But mostly chocolate. Did you know the municipal court once ruled that you have a right to turn a hose on workers who pile streetcar rails in front of your business?

“There was a flurry of excitement in the municipal court this morning when Frank Ziegler was arrainged on a charge of disorderly conduct. The facts were that the employees of the Milwaukee Street Railway company were unloading rails on East Water Street yesterday afternoon and piled some in front of the Ziegler candy factory in such a manner that the business of the firm was interrupted with, as its teams could not back up. Frank Ziegler remonstrated, and asked that the rails be placed in a different position. The demand was not complied with, and Mr. Ziegler turned the hose on the streetcar men, drenching them thoroughly. Officer Monahan was called on, and arrested Mr. Ziegler on a charge of disorderly conduct. After hearing the testimony, Judge [Emil] Wallber discharged the defendant, holding that it was one of those cases in which a man was justified in protecting his property by summary process, and that the employees of the railway company had no right to place obstructions in front of a business house against the owner’s protest.” – Milwaukee Journal, April 27, 1892

Who was this hose-wielding, business-protecting guy? Frank Ziegler was a second-generation candy maker. His father, George, founded the family business in the years immediately before the Civil War – mostly because he had enough money to buy a barrel of sugar. George’s family had immigrated to the United States from Germany in 1845 and settled on a farm in Dane County. Young George didn’t care for farming and moved to Milwaukee to learn the leather working trade. After a three-year apprenticeship, he went to work for the Bradley-Metcalf Shoe Co. In 1851, George married Barbara Boll. Her brothers, John and Andrew Boll, were out-of-work candy makers who had moved back in with their parents. George had saved a little from each paycheck, enough to buy a barrel of sugar and put his brothers-in-law to work. They started making candy in the kitchen of the Boll’s home at 13th and Vliet. The father of the Boll boys, a tailor, helped out by calling on local merchants and urging them to stock the candy. The Boll brothers proved to be excellent candy makers and their father seems to have been an unstoppable candy selling machine. The new company grew rapidly.

For a time, George continued to work at the shoe factory, keeping an eye on the business end of things in his spare time and occasionally dipping further into his savings when the new company needed capital. Soon orders were pouring in faster than they could be filled and Ziegler quit his factory job. On Jan 11, 1861, the firm of Boll Bros. & Co. was established. In 1865, the candy company moved into its a building on Third Street, then moved again to a building on Wisconsin Avenue. One of the brothers left in 1868 and the firm changed its name to Boll & Ziegler. In 1874, George Ziegler brought out the remaining partner and continued under his own name. One-by-one, George Ziegler’s five sons joined the business.

Frank P., that nemeses of streetcar workers, joined the company at age 11 as an errand boy. He worked his way up through the ranks as candy maker, buyer, plant superintendent, vice president, and president. A fire destroyed the factory in 1882, and although the company quickly resumed operations from a new location on East Water Street, the nervous strain of rushing the new factory into production severely undermined Frank Ziegler’s health. In 1887, he took an extended leave of absence to tour abroad. Returning, he was elected vice president and superintendent of the company. On his father’s death in 1904, he became president. During his tenure, he turned a small company with 40 employees into one of the largest candy makers in the Midwest – and one of the most innovative. It was the first to offer a chocolate bar containing peanuts. Unimaginatively named the “Milk Chocolate Peanut Block,” it was delivered to merchants in a giant slab. When a customer placed an order, a clerk would break off a piece.

In 1907, the company built a 112,000-square-foot, seven-story factory at 408 W. Florida St. In 1920, the company added a 72,000-square-foot addition. As Urban Milwaukee writer Jeramey Jannene reported in a 2016 story the candy factory had some unusual features, including two adjacent pairs of staircases, one for men and the other for women.

After a bit of trial and error,  Ziegler perfected a way, in 1911, to mold and wrap individual bars. The “Fox Trot Bar” was the first to be marketed under a distinctive name. The company also introduced the chocolate and peanut “Ziegler Giant Bar.” It was the first candy maker in the state to manufacture marshmallow, and the firm invented Candy Raisins, a regional favorite for many years. Frank died in 1939 at the age of 83. He was the firm’s chairman of the board at the time of his death, having worked for the company for 72 of its 78 years in operation.

With a new generation of family – Joseph E. Ziegler – at the helm, the company continued to turn out tons of candy each day from its Florida Street factory. In 1951, the company mailed 7,500 Giant Bars to wounded Korean War veterans recovering in overseas hospitals. The City of Milwaukee was one of its customers in those years, purchasing Ziegler Giant Bars at a steeply discounted price to supply Halloween programs for youngsters. In 1960, for example, 365,000 bars were purchased at a cost of $9,836.

The George Ziegler Co. remained in operation for more than 100 years, but all things must end. In 1971, the company was sold to an investment group. Three years later it was out of business. Candy making is no longer a major industry in Milwaukee, but Wisconsin is still the fourth-largest candy producing state, with $850 million in annual sales in 2015 and more than 2,000 employed in the industry. The leading companies are: Nestle in Burlington; Clasen Quality Coatings in Madison; Consumer Packaging Group, Hartland; and Impact Confections, Janesville. 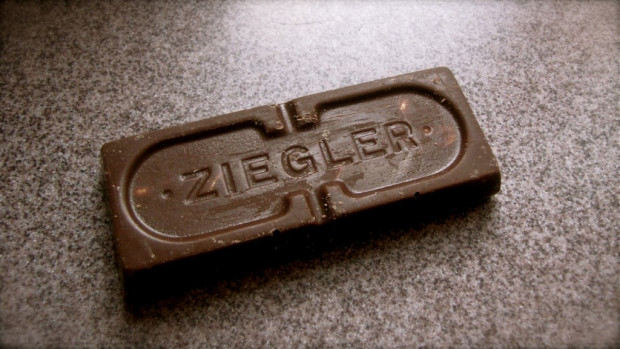 Although the company has been gone since the mid-1970s, Ziegler Giant Bars are still made. A local candy store makes the bars using the original recipe and original molds. Carl A. Swanson photo.

And you can still buy a Ziegler Giant Bar. In 1990, Bill and Mary Ziegler, the fifth generation of Ziegler candy makers, opened Half Nuts, a candy store at 9617 W. Greenfield Ave., West Allis. Among a range of other products, the store also makes and sells Giant Bars using the original recipe – and even the original molds.