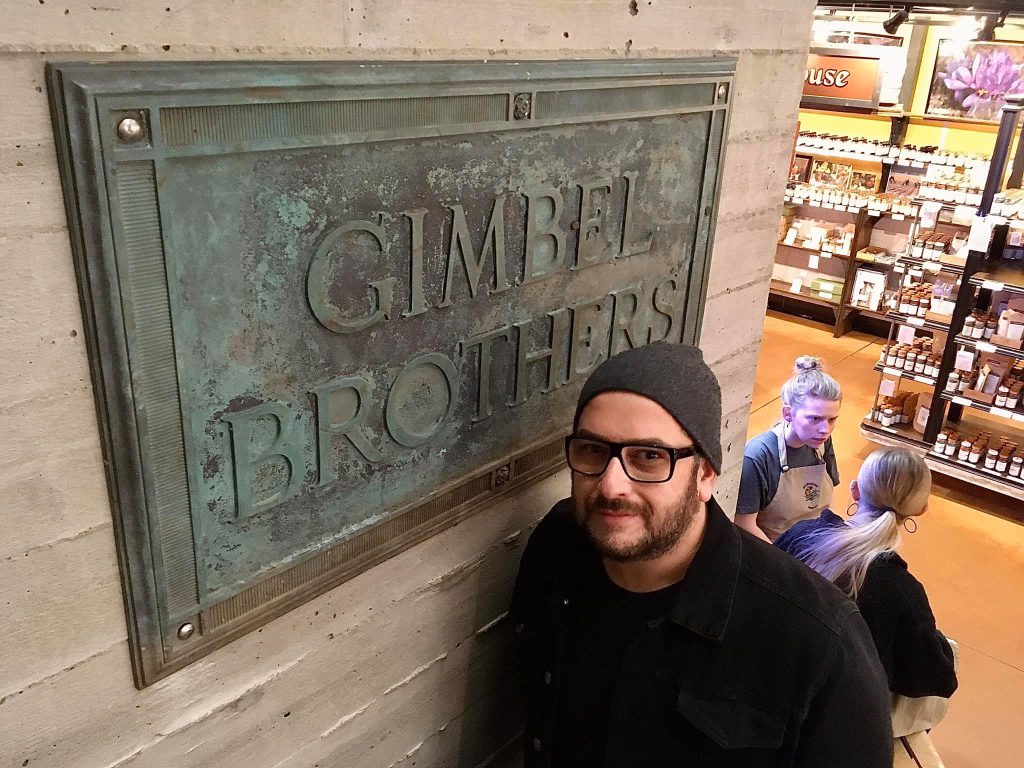 Adam Levin is an anesthesia assistant by profession who seemingly spends the remainder of his waking hours in pursuit of a two-pronged hobby. His investigations into local history is one part. His remarkable knack for the discovery and rescue of old advertising signs is the other. To represent those dual interests, his popular Facebook page, “Old Milwaukee has a cover photo of a vintage neon sign promoting the beer of that name.

In July, 2018, Levin received a Facebook tip: an old “Boston Store: The Heart of Milwaukee” sign was available. The retailer at 331 W. Wisconsin Ave., founded in 1897, was bankrupt. Its entire inventory, including the sign, had to be liquidated. For 30 years the sign was stored up in the “Visual Loft” along with displays and props. Time was of the essence if the sign was to be saved, and made publicly visible once again. With financial assistance from Andrew Kimmel of Paragon Numistmatics of Mequon, the sign was purchased and saved. Now what to do with it?

To Market We Go

The Milwaukee Public Market, 400 N. Water St., dates to 2005 and is a major tourist destination. In 2018 it drew a record 1.8 million visitors; sales were up ten percent, hitting $18 million. Manager Paul Schwartz, who follows Old Milwaukee, uses the market’s limited, yet highly visible, wall space to display artifacts and photographs from the city’s earlier days. By the end of July, the sign was donated to its new home and mounted high on its south wall. Schwartz liked it, and it got him to thinking about Gimbel’s, a historic rival of Boston Store, and whether an old Gimbel’s sign might be found to join the collection.

“When Adam Levin and I worked together to get the Boston Store sign here, I asked him about [procuring] a Gimbels sign/plaque. He said he’d keep a look out and let me know,” Schwartz tells Urban Milwaukee.

Gimbel Brothers, for decades the city’s largest department store, was founded in Milwaukee in 1887. The firm expanded to Philadelphia in 1897, and most famously to New York City in 1910. Its Milwaukee flagship store on the west bank of the Milwaukee River at 101 W. Wisconsin Ave. was constructed in many phases, and covered an entire city block. Its 8-story east (riverfront) portion, clad in white terra cotta, was designed in 1923 by famed Chicago architect Daniel Burnham, and remains among the most striking facades in the city. It was there, along the city’s first riverwalk segment, that a 2-foot by 4-foot bronze plaque reading “Gimbel Brothers” was affixed to the retail emporium, near the entrance on its northeast corner. These were heady days indeed for Gimbel’s, which by 1930 had grown into the largest department store chain in the world. 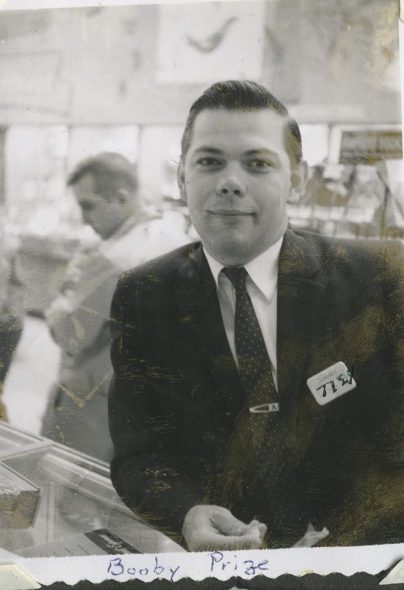 Robert Alm, a Gimbel’s employee who got the sign at the closing of the store. Photographer unknown.

The Old Milwaukee Facebook search for the sign came to the attention of Rebecca Mayer Alm of Menomonee Falls. Alm, who restores historic photographs, is one of the 47,787 people who follow the page. She also owned the sought-after bronze Gimbel Brothers plaque, which was given to her father-in-law Robert Alm, a former employee, when the store closed in 1987. It had remained in storage ever since.

Levin tells Urban Milwaukee: “I was informed Nov 27 2019 about the plaque and stopped by Rebecca’s house the same day. (She) asked if I could help find it a new home.” Levin then put up a post on Old Milwaukee, showing a picture of the plaque:

A member in this group invited me over to check out this fossil. It was on the east side of the building on W. Wisconsin Ave, along the river until the store closed in 1987. It’s the original plaque, weighs 86 pounds and is made of bronze. The owner is willing to part with it for $350. Hopefully we can find a home for it in public.

*sold to the Milwaukee Public Market*

On November 27, Adam tagged me in a post with photos of the plaque…essentially letting me know it was available.  I immediately responded and asked for the owner’s contact info. He sent it. I called Rebecca and told her how the Market has been on the lookout for historic signage and antiques to pay homage to Milwaukee’s history.  I explained that we believe it’s part of the Market’s mission to display things like this (when appropriate) in order to tell another part of the story of Milwaukee, in the hopes that it ignites some positive nostalgic feelings from the people who visit us and grew up in these places. 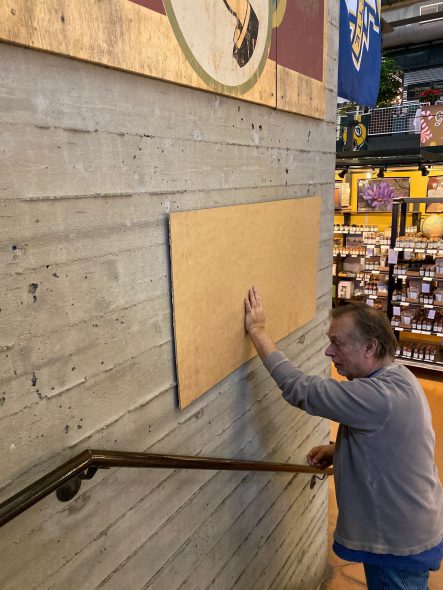 Within a couple days of that conversation, a couple guys on our staff drove out to Rebecca’s house to pick it up.  In the meantime, Adam came over to the market later that day so he and I could figure an appropriate place to mount it.  As you saw, it’s got some great patina, which I love — but that also means it needed to be mounted near eye level so people could see the lettering better.  I showed Adam the place near the stairwell and his eyes lit up.

Dave Lesky used to work for a cement contractor for much of his career.  He secured four heavy duty concrete anchors to mount into each corner.  Each of those holds up to 1,000 pounds.  After they mounted it, he told me “We’re not getting this off anytime soon….if this thing comes off, that means the Market collapsed!”

Schwartz added, “[The sign] came to my attention through the power of social media…and the popularity of Adam’s posts on Old Milwaukee.”

Levin, his duty done, and ever on the search for the next sign, gave his “thanks to the Milwaukee Public Market for displaying another piece of Milwaukee’s past for the public to see for generations to come.” His upcoming book, “Fading Ads of Old Milwaukee,” [$23.99 Arcadia Press], a compilation of his photographs of the region’s “ghost” signs, will be released on February 10th. Levin will give a talk on the subject at 7 p.m. on February 21st at Boswell Books, 2559 N. Downer Ave.

In Place for Holiday Party 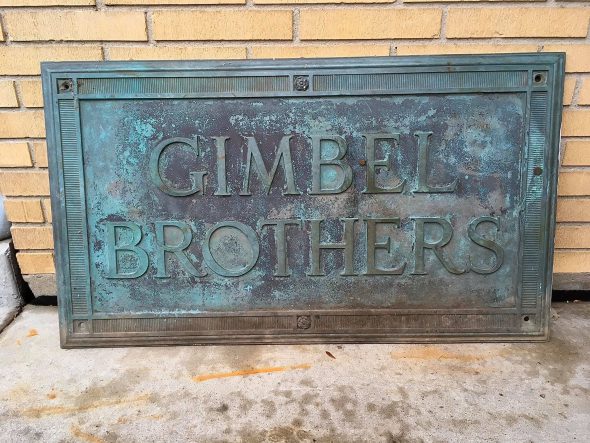 That the sign had been discovered and displayed within a two-week period is itself an accomplishment; that it was mounted the day before the annual Business Improvement District #2 (Historic Third Ward) Holiday Party held at the Milwaukee Public Market on December 11th, was most serendipitous. (The BID owns the market building.) As hundreds walked up the stairs to the party on the mezzanine, they passed the bronze plaque, which will soon be joined by a brief description of its history — one that will not require bolts capable of holding a half-ton each, it is imagined.

The attendees were greeted by area Ald. Bob Bauman, wearing a grey suit and yellow tie. Not far away were neighborhood residents Craig Schanning and his wife Mary Schanning, a Deputy City Attorney who handles real estate matters (Fiserv Forum) and other complex negotiations (Democratic National Convention) for Milwaukee. She was gathering signatures on nomination forms for her boss, Grant Langley, who also attended. Langley told Urban Milwaukee that agreements must be signed with some 110 various governmental agencies on various matters relating to the upcoming convention. This should keep his deputy plenty busy. Schwarz was there, as was Levin, who posed for a photograph with the plaque. Real estate developer Robert Joseph, who is much active in the Third Ward, was there with his father-in-law Mike Toffler of the Chocolate Factory. As usual, live music was provided by John Schneider, singing Christmas classics to the accompaniment of Connie Grauer on piano.

Jim Plaisted, the executive director of the BID made a brief address to the crowd. Attorney Craig Mastantuono, a member of the Board of Harbor Commissioners (a.k.a. Summerfest‘s landlord) stopped by after work. Kendall Breunig, whose Pritzlaff Building is the only BID #2 property located west of the river was there. His building is fully leased, he said. Its newest feature, Aperitivo, a bar and restaurant at 311 N. Plankinton Ave. will open in early January said Richard Kehrin, its managing partner. Designer Armahn Gonz mugged for the camera with Mauricio Ramirez, the prolific muralist whose works are showing up on walls all over town. Former alderman Michael D’Amato appeared, as did Hon. Joe Donald, recently elevated to the Wisconsin Court of Appeals by Gov. Tony Evers. Patrick Nedobeck of the market’s popular St. Paul Fish Market (and best known for the annual ice bar he operates there) spoke with Sam Davis, fresh off of work from his shift at the nearby Swingin’ Door Exchange. Guests enjoyed wine, beer and a selection of food from the market’s vendors, as another successful year drew to a close.

How successful? I asked Schwartz. He responded, “2019 is going to be one for the records. Looking forward to all the development in the area. … Good things on the horizon.”

And a great bronze artifact from Milwaukee history on the wall. 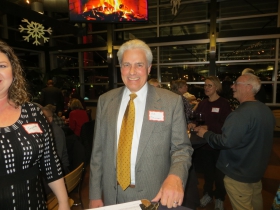 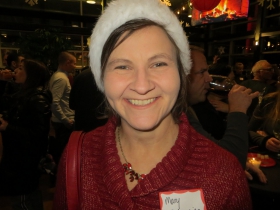 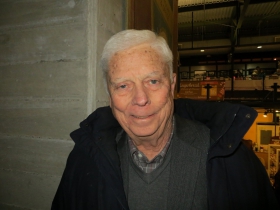 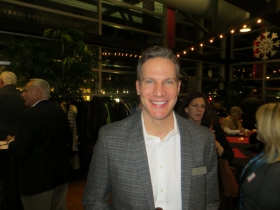 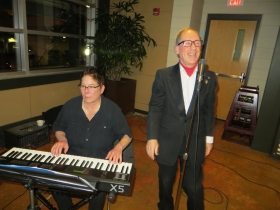 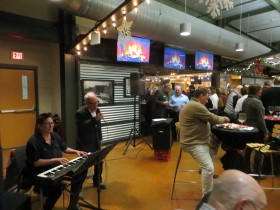