Make It a Crime to Harass Referees?

Some legislators are considering such a bill. Bad idea. 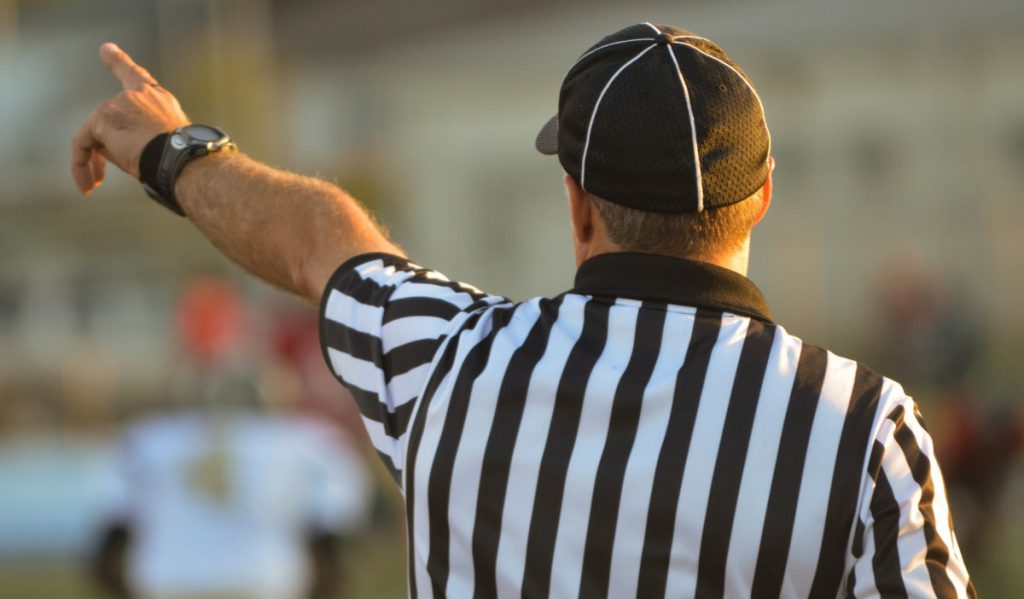 Some state lawmakers want to make it a crime to harass a sports official during a game.

In an interview with Fox 6 News, State Rep. Don Vruwink, who referees youth sports games, said, “You feel threatened” and “You do it because you love the game, but you don’t love the game when you get yelled at for making a call that somebody thought might be wrong.”

The proposed new crime is still in the early stages and has not yet been formally introduced. But according to a “preliminary draft” and an analysis by the Legislative Reference Bureau, “Under this bill, the person is guilty of a Class A misdemeanor if the person commits harassment against a referee, umpire, judge, or person performing similar functions and the harassment is in response to, or intended to influence, any actions by the sports official.”

A sports fan who violates the law faces up to nine months in jail and a $10,000 fine, or both.

Although the bill is still in the very early stages, it appears the crime could be aimed at fans who strike, shove, kick, harass or intimidate a sports official in Wisconsin.

It should be a crime to do anything physical to a referee, such as strike, kick or shove him or her. However, we already have laws that criminalize such conduct, such as battery. The battery law in Wisconsin already criminalizes the act of causing bodily harm to a victim (not just referees) if the person intended to cause bodily harm to the victim.

The issue becomes the government criminalizing and jailing a sports fan for “harassment” of a sport official. While most reasonable people agree that no fan should harass sports officials during a game, harassment can encompass a broad range of verbal conduct.

The initial draft of the bill does not just cover high school sporting events. It covers a sports official at any sporting event open to the public, whether the official is paid or unpaid.

How many fans at sporting events in Wisconsin could be jailed for “harassment” of sports officials based upon what he or she yells at a referee?

If the new proposed law passes, could people like former Packers head coach Mike McCarthy be charged with the crime? Back in February, McCarthy apparently berated an official following McCarthy’s stepson’s high school basketball game. According to Fox 11 WLUK in Green Bay, the official described McCarthy’s actions as a “verbal tirade.” The WIAA reportedly filed a complaint over the incident.

The term “harassment,” depending on how the law is ultimately drafted, could cover a broad range of conduct and jail sports fans for saying things that may well be rude and obnoxious, but are part of a long tradition of rowdy, obnoxious behavior by sports fans at games.

Whenever the government criminalizes conduct, that is a game-changer, no pun intended.

The Wisconsin Interscholastic Athletic Association (WIAA) supports the bill because of a shortage of younger referees.

Although the executive director of the WIAA, Dave Anderson, told Fox 6 News that the “first intention” of the proposed law is not to arrest sports fans, that does not in any way mean rowdy or obnoxious sports fans will not be arrested under this law.

As a sports fan, this writer does not appreciate fans who yell nasty things at referees who are only trying to do their jobs. But that does not mean we should throw those fans in jail.

In an op-ed from January 2019 titled “Dear Mom and Dad: Cool It,” the WIAA focused on the verbal criticism by parents toward sports officials. The op-ed, which is geared toward parents, reads, in relevant part, “when it comes to verbally criticizing game officials or coaches, cool it.”

The op-ed said nothing about parents making physical contact with sports officials, which any reasonable person would agree should be, and already likely is, covered by criminal laws on the books.

And even if the behavior of some sports fans toward referees is one reason there are fewer younger referees, it may well not be the only reason. Millennials and younger people who could otherwise become sports officials may simply have different interests and priorities than their older counterparts once did.

Whenever laws are drafted, extreme caution must be taken so government avoids criminalizing purely verbal speech that could encompass a broad range of conduct. Of course, fans should be respectful of referees and other sports officials. But it does not mean we should make criminals out of those who do not do so.

This column was originally published by the Sheboygan Press.