By Melanie Conklin, Wisconsin Examiner - Dec 23rd, 2019 05:10 pm
Get a daily rundown of the top stories on Urban Milwaukee 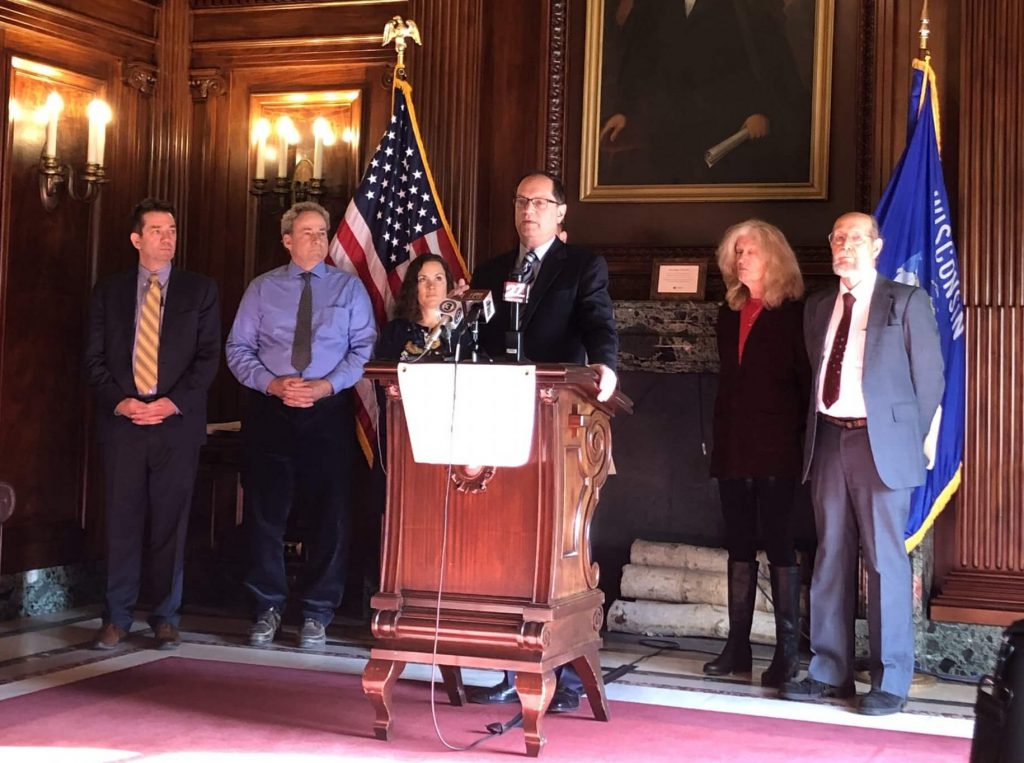 A group of defense attorneys joined the Wisconsin Justice Initiative in filing a lawsuit in Dane County Circuit Court last week, seeking either to block a controversial victims’ rights constitutional amendment known as Marsy’s Law from appearing on the April 2020 ballot or to require it be rewritten to reflect “the sweeping changes” it could make to state law.

The plaintiffs, including state Sen. Fred Risser (D-Madison) in his role as an attorney, argue that the potential amendment is vague and does not come close to communicating the law’s impact. For example, the ballot question, they say, does not explain how expensive Marsy’s Law could be for taxpayers nor does it show how it could potentially thwart justice.

“Wisconsin residents are being asked to vote on a single sentence that doesn’t remotely begin to describe what Marsy’s Law is and what it does,” asserted attorney Craig Johnson, president of the Wisconsin Justice Initiative, speaking at a news conference in the Capitol the day after filing the suit. “The question on the ballot may sound reasonable, but it masks a proposed amendment twice the length of the Bill of Rights. Imagine if the Bill of Rights were put to voters in a 64-word question.”

He argued that the bill alters who is considered to be a victim and adds or expands 16 different categories of victim’s rights.

In Wisconsin, the state constitution can be amended by a three-step process. The measure must pass the Assembly and the Senate each twice — with a general election in between the two votes. Only then can it be put before Wisconsin voters to be ratified or rejected in a general election.

Marsy’s Law has passed the legislature twice on overwhelmingly bipartisan votes, the final time in May 2019. The proposed constitutional amendment will be put to voters on the April 2020 ballot unless the lawsuit is successful.

“Wisconsin residents shouldn’t have to vote in the dark,” Johnson said.

Teri Jendusa-Nicolai, whose abusive husband beat her with a baseball bat, stuffed her in a trash can and left her to die in a frozen shed, said she believes the law would have given her more rights during the subsequent trial, in which she was required to submit past medical records, among other things. She described the process as causing additional suffering. 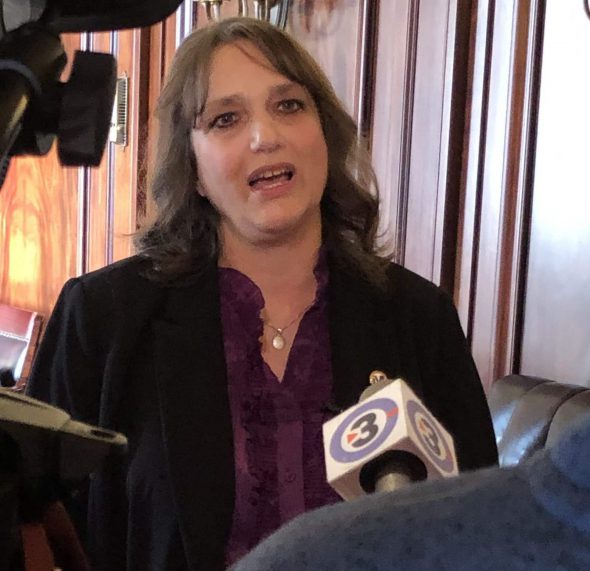 She became the Wisconsin chair of Marsy’s Law, telling her story and advocating for passage. Marsy’s Law for All is a nationwide movement spearheaded by Henry Nicholas III, the billionaire founder of the tech firm Broadcom. He named his crusade in honor of his sister, Marsalee, who was shot and killed by an ex-boyfriend in 1983. His goal is to amend all 50 state constitutions and the U.S. Constitution.

After watching the news conference, Jendusa-Nicolai and others working with Marsy’s Law in Wisconsin held an impromptu response news conference in the same room where the attorneys discussed their reasons for opposing the lawsuit.

“Today, this is basically a slap in the face to all victims of crime in Wisconsin,” Jendusa-Nicolai stated. “I don’t know about other people in this room but I do believe in the intelligence of the voters of Wisconsin.”

Jendusa-Nicolai summed up the law as “taking away fishing expeditions” that go after victims’ information and records and stressed that it was nonpartisan. “What Marsy’s Law does is taking rights victims already have,” she said, “but we’re enshrining the rights — just like the accused has rights that are enshrined.”

One thing both sides agreed upon was that Wisconsin has led the nation on supporting victims’ rights.

American Civil Liberties Union of Wisconsin Executive Director Chris Ott hailed Wisconsin’s role, saying it was the first state in the country to adopt such rights in 1980.  He sees this constitutional amendment as a move backward for justice.

“This threatens the fundamental concept of innocent until proven guilty,” Ott said. He added that it is “not about who supports victims most” nor is it a “zero sum game … we can and should protect both.”

An additional argument that several of the attorneys who are plaintiffs in the suit made was that the cost to taxpayers could be extremely high, as well as overburdening the already stretched justice system, courts, police and corrections.

Attorney Jerome Buting said he joined the lawsuit out of an array of concerns including its impact on taxpayers and the justice system. He stated that the wording potentially gives the victims the right to a taxpayer-paid attorney, which could “create a state’s victims’ rights agency with a budget on par with the $90 million state public defenders.” The difference, he argued, is that the government is in an adversarial role against the accused, with the potential to take away an accused person’s liberty, and — in other states that have the death penalty — even their life.

Buting also noted that data an alleged victim could withhold under Marsy’s Law might include text messages, GPS data, cell tower data and other records that help police investigations and are are often the “best indication of events” and proof of a potential crime.

Buting became well known as the co-defense attorney in the State v. Steven Avery murder trial in 2007, and subsequent attention in Netflix’s Making a Murderer series and with his book Illusion of Justice: Inside Making a Murderer and America’s Broken System.

“This proposed amendment really turns the presumption of innocence on its head because it presupposes that a crime, with an actual victim, occurred when that is often the very issue that has to be decided later at a trial by a court or a jury,” Buting said.

‘Marsy’s Law for All’ elsewhere

Forbes reported that Nicholas spent $71.8 million across the six states where Marsy’s Law was on the ballot in November. Amending the constitution of Pennsylvania was approved by voters last month, but is being held up from implementation due to a court challenge similar to the one filed in Wisconsin.

Wisconsin Democracy Campaign’s Matt Rothschild said Nicholas and Marsy’s Law was the third biggest spender in Wisconsin lobbying in both 2017 and 2018, adding, “Our state constitution should not be on the auction block.”

According to the Pennsylvania Capital-Star, attorneys from the Pennsylvania chapter of the American Civil Liberties Union “filed an 11th-hour challenge to Marsy’s Law in mid-October, saying the amendment unlawfully combined multiple constitutional changes in a single ballot measure: “The amendment would add 15 new rights for crime victims to the state Constitution. But opponents say in their lawsuit that would affect rights enumerated in other sections of the Constitution, including a defendant’s right to a fair and speedy trial.”

The successful injunction the ACLU secured stops the law from taking effect as the challenge works its way through Pennsylvania’s appellate courts — a process that may take years. South Dakota rewrote its amendment after two years due to taxpayer costs and difficulties if caused for police investigating crimes. The Montana Supreme Court struck down its version of Marsy’s law in 2017 because the changes made should have been submitted to voters separately rather than as a single initiative, the court ruled. Both these cases raise questions similar to those being posed in the Wisconsin lawsuit.

Nicholas was involved as a defendant in the legal system after being arrested in Nevada in August 2018 on drug trafficking charges, but struck a plea deal to avoid prison and a felony conviction in exchange for $500,000 and minor penalties, which caused outrage in the state. He continues his role funding Marsy’s Law for All advocacy, including pushing the referendum in Wisconsin.

After Nicholas’ arrest his organization put out a statement that the Examiner cited that read: “The allegations in the media should not interfere with Marsy’s Law, the victims’ rights movement started by Dr. Nicholas, that so many victims, advocates, law enforcement leaders, staff and volunteers are working to advance across the country.”

The current language that has passed the legislature twice and is set to be on the April ballot reads: