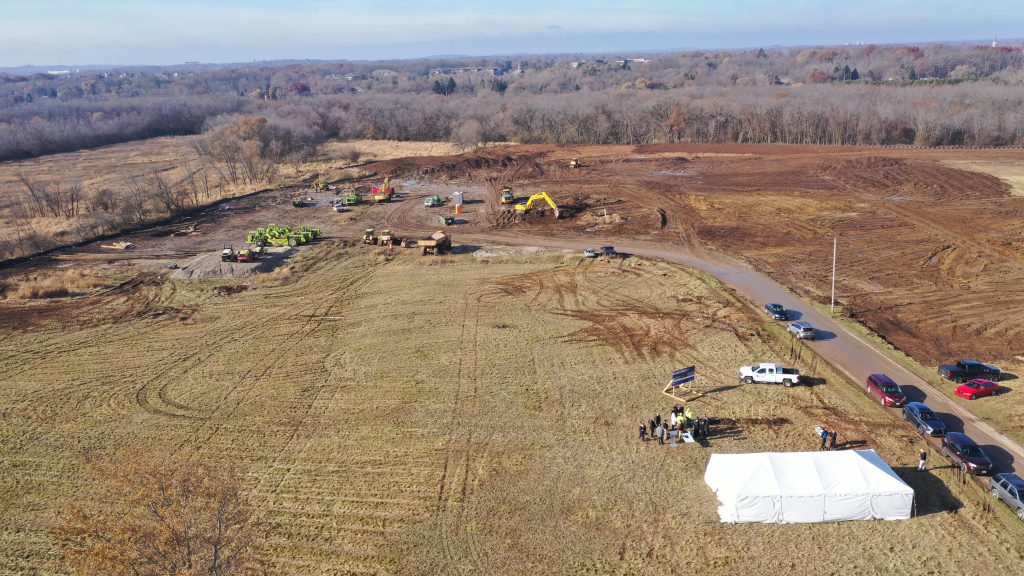 Without great fanfare, construction is underway on a new warehouse and office building that will bring over 200 jobs to the city.

Western Building Products held a ceremonial groundbreaking in late November on its 326,619-square-foot building at 7007 N. 115th St. The employee-owned millwork distributor is relocating to the city from Wauwatosa as part of a long-term expansion plan. It could eventually construct an addition with 75,805 square feet of warehouse space.

The Common Council approved its final piece of the puzzle on Tuesday, approving a Certified Survey Map that merges parcels needed to form the 31-acre site and clarifies the boundaries of the N. 115th St. right of way.

The complex, which will house all of Western’s 208 employees when it opens in 2021, is being designed and built by Briohn Building Corporation on a site located between the Menomonee River and Interstate 41. Located just south of W. Good Hope Rd., the site has long been known as Joy Farms and was most recently rented by We Energies for equipment storage.

The city will provide $2.45 million via a tax incremental financing district. Those funds, effectively a property tax rebate, will offset the company’s cost in establishing sewer and water service on the site. The district would be developer financed, placing the risk on the developer. Under the deal the funds would be returned to the developer only after incremental property tax revenue is generated by Western Building Products’ development. The financing plan was approved in July.

Why leave Wauwatosa? “We just don’t have the room in our current facility to do some of the things we would like to do,” said Bill Zacher, Western’s representative on the project during a hearing on the plan. That includes not only expansion, but storing a number of waste streams and rejected millwork items indoors. Zacher said Wauwatosa offered the company a site on a former landfill for free, but the project wasn’t financially feasible.

The plan by Western and the city also has the firm paying for the cost of the sewer connections for the 14 other properties in the area, 11 of which have homes on them. The homes would be required to connect to the system because a sewer would now run in front of their properties to service Western’s building. The distributor estimates the cost of this effort at $300,000 and said it will come at no cost to the homeowners.

The sewer plan, noise from trucking and design concerns resulted in a series of objections from nearby residents. But area Alderwoman Nikiya Dodd took exception to the leaders of the opposition.

“I do appreciate the neighbors coming out and sharing their testimony. It is important that we hear neighbors’ voices. It is important that they share their concerns,” said Dodd in July. “But this process has been manipulated.” Dodd said Bruce Winter and another nearby property owner, the Adriansen family, were seeking to enrich themselves by killing the deal and attempting to increase the redevelopment value of their land by lying to the committee.

“If we lose this company it sends a message to anyone that wants to move to Milwaukee that we put them through rigorous hoops for nothing,” said Dodd. City officials started working with the company in October 2018, a month before Dodd was elected in a special election.