How two women created a platform for local Muslim artists.

When Amal Azzam could not find a gallery to showcase her art, she became frustrated.

The 27-year-old, who is known as Mila in the art world, is Muslim American and was born and raised on Milwaukee’s South Side. She and a friend, Nayfa Naji, a 22-year-old Milwaukee native studying graphic design at the University of Wisconsin-Milwaukee, decided to create a forum to showcase the works of Muslim creatives in their community.

From their vision came Fanana Banana. (Fanana in Arabic means artists and banana is their creative and goofy twist to the name.) 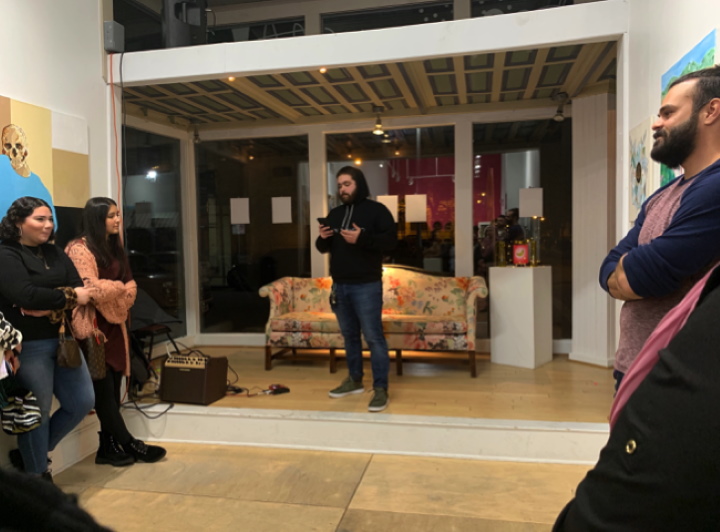 “We’re all mostly on the South Side because that is where our mosque is. A lot of refugees are placed near the mosque, so the area is getting larger and larger,” Azzam said.

Fanana Banana held its first art show in April at Dream Lab in Walker’s Point, where 16 artists showcased their work. In November, it hosted its second show at Walker’s Point Center for the Arts and received more than 25 submissions from local Muslim artists.

A place for creatives

Zeki AbuLughod, 24, who has been reciting poetry since his brother introduced him to the art when he was only 6, was one of the participants in the November event. AbuLughod has appeared in front of many crowds, but he says it is rare for him to do it in front of a Muslim one.

Another artist at the show was Nada Alzalloum, 27, who moved to the United States when she was 6. 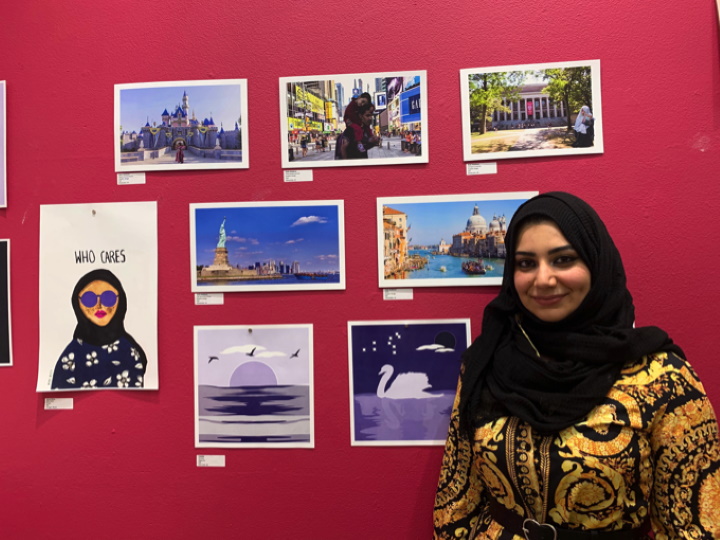 Nada Alzalloum, 27, an immigrant from Jordan, stands in front of her digitally created images. Photo by Claudia Delgadillo/NNS.

“Art is just a way to bring out what is in my heart. I saw a quote that said, ‘If you feel like you don’t belong in this world, maybe you were created to make a new one,’ so I use my art to create a new world. So maybe it starts out as art and later it comes true,” Alzalloum said.

Alzalloum uses Photoshop to create images of Muslim refugees but places them in a different environment.

“Usually I take photos of refugees out of a background, out of a refugee camp or out of the water if they’re on a boat and I’ll put them in nicer place,” Alzalloum said. “I took a photograph of a child and I took her out of a refugee camp and I put her in Disney World because that’s where children belong, not in a tent.”

With a growing Muslim refugee population in Milwaukee, Alzalloum wants to change the way people think about them and instead consider ways they can help refugees feel more welcome in their new home. 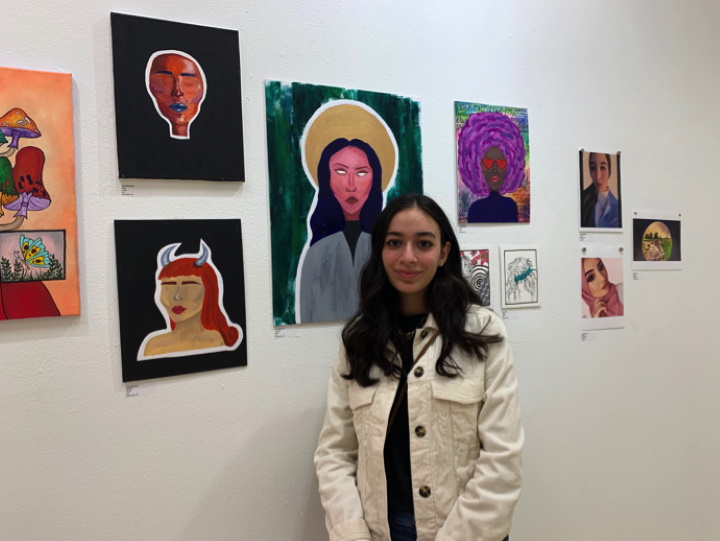 “I am not a refugee,” Alzalloum said. “I’m an immigrant, but I see myself in them. We’re all humans. I come from the same place they do, I was just fortunate enough where I didn’t have to leave under such horrible circumstances.”

Lena Mahmoud, 17, a student at Franklin High School, was encouraged by her family to enter her paintings in the art show.

“I mainly grew up in Franklin and it is very white, and I was surrounded by that all my life,” Mahmoud said. “But I feel like I’ve held on to my roots and culture very well because it’s something I boast about to everybody at my school. I definitely try to resonate different cultures, including my own, in my art.”