Poll Shows Trump Ahead in State

MU Poll shows him beating the major Democratic candidates, though within margin of error.

By Melanie Conklin, Wisconsin Examiner - Dec 16th, 2019 03:09 pm
Get a daily rundown of the top stories on Urban Milwaukee

At first glance, the message from this month’s Marquette poll is less than exciting: Registered voters who are polled are generally paying far less attention to the daily drama of politics than all the insiders who expectantly wait for the poll’s results of the Marquette poll every month do.

Wisconsinites, to sum the polling up in brief, are pretty equally divided,  mixed on impeachment and don’t feel much different than we did last month. Or the month before that. In both months there was a similar result, with Trump barely leading all four of the leading Democratic candidates for president, but the difference was within the margin of error.

So Wisconsin remains very much a swing state, according to all the results from the Marquette Law School’s latest poll released last this week. Which closely mirror results from the November poll.

The two polls are so similar, in fact, that lead pollster Charles Franklin said as he was preparing this month’s presentation that he had to check his slides and go back and recheck them again because he was concerned a slide was from the previous month.

That’s because the two slides were identical.

That shouldn’t be confused with a finding that voters are completely disengaged or do not care at all, according to the discussion during the poll’s release by Franklin and On the Issues host Mike Gousha. Franklin says it just means Wisconsin remains, as they say, too close to call.

“The stability here is really the striking bit I think,” noted Franklin, referencing opinions on impeachment, but also summing up the general message he took from the poll overall.

More than half of Wisconsin voters surveyed said Donald Trump should not be impeached. That was the headline on most news accounts coming out of the December poll. The numbers were 52% against impeaching Trump and 40% in favor of impeaching Trump. Another 6% didn’t know what to think. 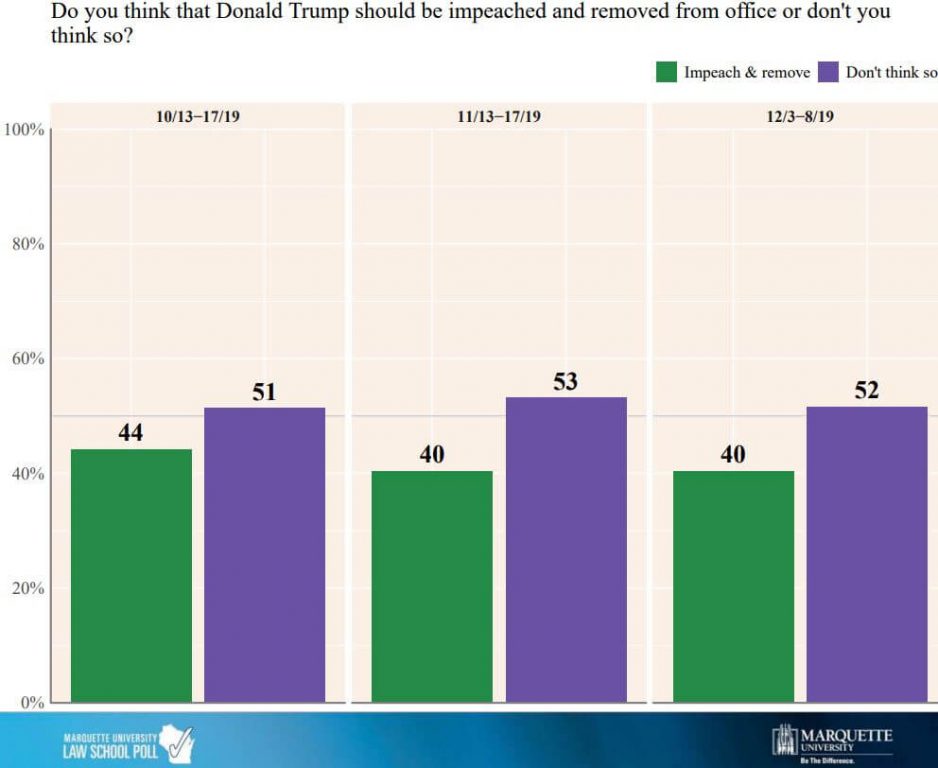 Views on whether President Trump should be impeached in Wisconsin according to the October, November and December 2019 Marquette Law Poll

“We have very little change on impeachment opinion since last month,” said Franklin. “So the full set of testimony [from the hearings] did not move voters compared to where they were with partial testimony. A little bit of movement from where they started out before any testimony. They became a little bit more skeptical of impeachment, but the change was small and now we just are seeing no change at all.”

An alternative headline on this poll could have been, “A majority of Wisconsinites believe Trump did something wrong in his dealings with Ukraine.”

The poll showed that more than half of Wisconsinites (52%) believe Trump asked Ukrainian president Volodymyr Zelensky to investigate his political rival, and most (51%) think Trump did something wrong. In fact, Franklin cited this as the crucial point.

“This is the core of it  — the debate not about what happened, but how do you evaluate that,” Franklin opined. “And here, virtually no change.”

Fewer people surveyed were sure if Trump threatened to withhold military aid. “But none of those numbers changed in the wake of the full testimony,” said Franklin. “You see how solidified people’s views are. How little the testimony and other proceedings of the impeachment investigation have budged public opinion. Barely moving the question of withholding aid and not moving at all in the evaluation of whether that was a seriously wrong thing to do.”

Noting how strongly divided Democratic and Republican respondents were along party lines on Trump’s interactions with Georgia, Gousha noted, “People are dug in, sort of hardened in how they view this.”

“Spoiler alert — all of the matchups are very, very close,” began Franklin in discussing the head-to-head race match-ups.

That includes the presidential Democratic primary, he said, “where we see candidates pretty close together, though consistent first, second, third, fourth contenders.” 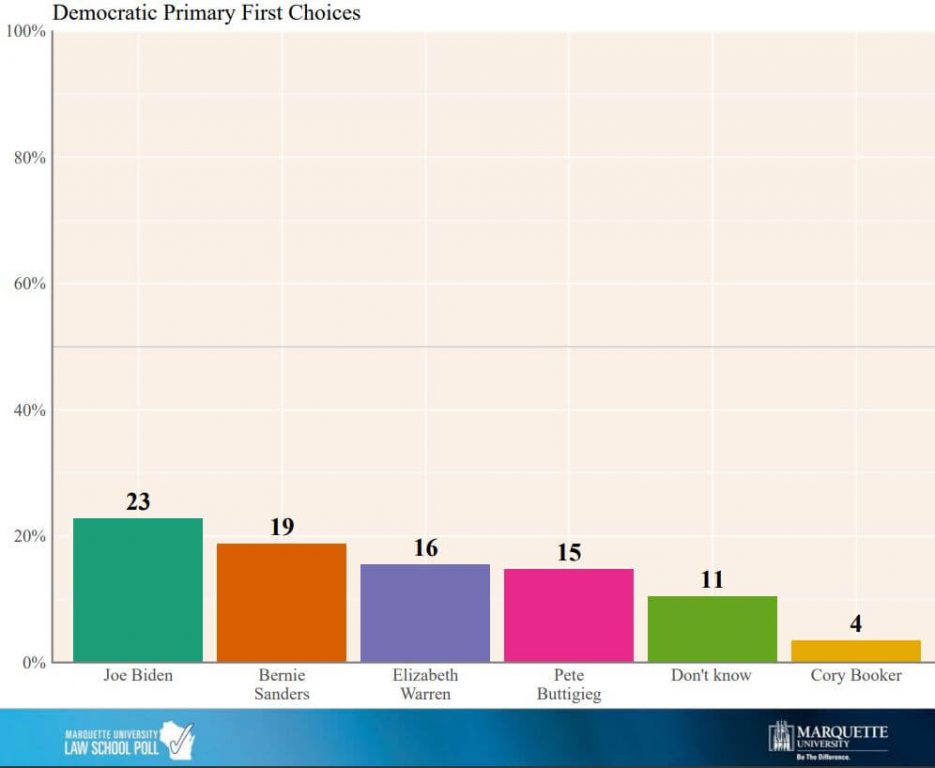 “And in the presidential race, we see pretty close races in all of them,” he added.

That said, while Democratic numbers edged up a bit since last month in a head-to-head contest with Trump after edging down a bit before, things are close enough that you can’t read much into it. All of the results are within the margin of error. Vice President Joe Biden remains at the top, closely followed by Sen. Bernie Sanders then Sen. Elizabeth Warren then Mayor Pete Buttigieg.

Among the frontrunners, the highest unknown rating goes to Buttigieg. “Here’s a guy that’s leading in Iowa and has moved up in the polls nationally but is still not campaigning in Wisconsin yet at this point and still has a long ways to go to introduce himself here. Those who do know him have an opinion that’s quite favorable,” summarized Franklin.

Who do you love?

The Marquette Poll included questions on favorability of various Democratic presidential candidates among self-identified Democratic primary voters. All four frontrunners did well. The highest unfavorable rating among the four was Sanders, and it was only at 23%. And his favorables tied Biden at 68%. (Warren had 59% and Buttegieg 44%, although he also had the lowest unfavorables at 10% and was also the least known.)

Two other comparisons were revealing. Although Sen. Cory Booker was down at just 4% in the polling, his numbers vis-a-vis Trump were virtually equal, showing that a partisan split down the middle on Trump re-election remains in place even if the nominee were a far less visible Democratic candidate.

There was one exception — one candidate who didn’t fare well with Democratic primary voters despite spending a lot of money on advertising already, noted Gousha, adding, “If you are watching football on Sunday, you are watching Michael Bloomberg.”

The former New York mayor announced his candidacy on Nov. 24, after last month’s poll was headed into the field

Bloomberg’s unfavorables at 32% notably outpaced his favorables at 23%. “Bloomberg has by far the greatest media spending here, but it does show he walks into this race late without a reservoir of strong initial support,” Franklin said.

And while not all Wisconsinites are giving their full attention to politics, according to the poll, here is one more consistency:  Folks in D.C are closely watching Wisconsin.

Although the news from this poll could really be summed up as “no news” it was covered in detail in The Hill out of D.C. under the headline, “Trump neck and neck with top 2020 Democrats in Wisconsin: poll.”

And it gave the same rundown of Dem candidates from “the crucial swing state of Wisconsin,” very similar to previous months.

The Hill went on to call the results “a shift from the same survey in November, which showed Trump with wider leads over most of his Democratic opponents.” It also said, “Democrats are buoyed by a negative approval rating for Trump — 47% of registered Wisconsin voters say they strongly or somewhat approve of the job the president is doing and 50% say they strongly or somewhat disapprove.”

(There again, the difference between approval and disapproval is within the 4.2 margin of error.)

The Washington Post, looked at the poll results from Trump’s point of view: “Every Democrat ties Trump in the state he must win.”

“It’s widely assumed that the 2020 voting in Wisconsin will go a long way toward determining whether President Trump serves a second term,” stated opinion writer Greg Sargent. “This leads to a number of conclusions, some of which are promising for Democrats — but others that are heartburn-inducing, and at least one that is truly alarming.”

There you have it, Wisconsinites. We’re the center of the universe. And the Marquette poll — called the gold standard of polling in Wisconsin in that same Post article — will be back in January and every month until Wisconsin’s April 7 primary.

So, as Franklin concluded his polling presentation, “Stay tuned.”