Calls on Washington “Redskins" to change “offensive" name and mascot.

By Megan Hart, Wisconsin Public Radio - Dec 9th, 2019 03:19 pm
Get a daily rundown of the top stories on Urban Milwaukee 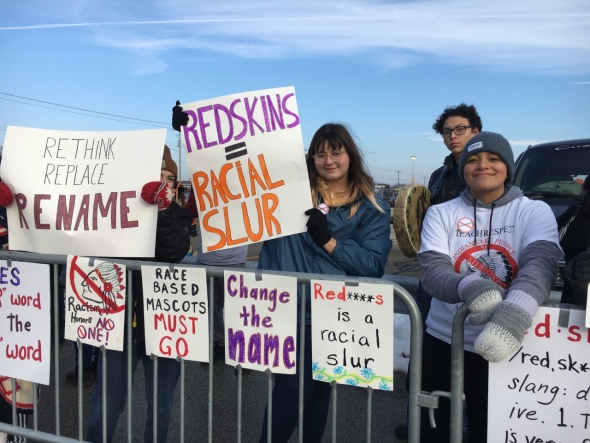 Isabella Saiz, 14, and her friends protest the name and mascot of Washington’s NFL team outside Lambeau Field in Green Bay on Sunday, Dec. 8, 2019. Photo by Megan Hart/WPR.

Green Bay Packers fans weren’t the only group outside Lambeau Field on Sunday morning. A sizable contingent turned out to protest the name and logo of the opposing team.

There have been calls for years for Washington’s NFL team to change its name and mascot. Its name is widely deemed offensive, while studies have shown that American Indian mascots can have harmful effects on Native American youth.

“There is real genuine harm that comes from professional sports mascots and trickles down to college sports mascots and high schools, where children learn early on that there is a difference between one set of people because of the color of their skin,” said Ken Munson, a member of Oneida Nation who protested before Sunday’s game. “We can help people learn that’s not the case.”

The task force is made up of indigenous people and their allies from across the state, she said. Many turned out to Sunday’s protest including Clif Morton. He called Washington’s name and logo the “most egregious nationally” in terms of its stereotyping of American Indians.

“We thought it was very important to come here today and send a message to their team management, their players and to the fans who come here that it’s more than time for a change,” Morton said. 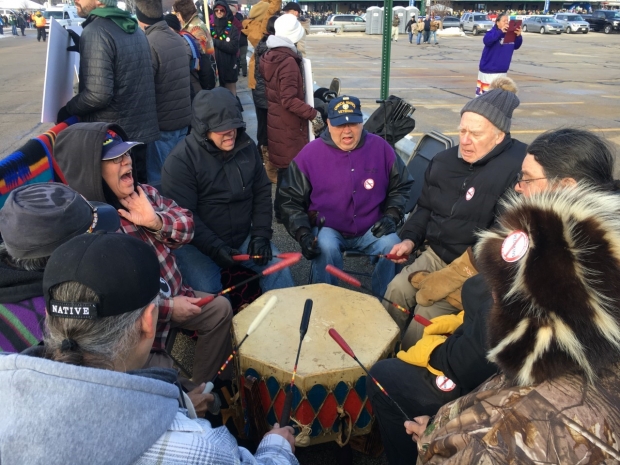 A group drummed Sunday, Dec. 8. 2019, during a protest against the mascot of Washington’s NFL team at Lambeau Field in Green Bay. Photo by Megan Hart/WPR.

Isabella Saiz, 14, brought some of her friends along to the demonstration. She said she received lots of smiles and “Go Pack Go” cheers from fans heading into the game, but she didn’t mince words when asked what she’d say to Washington’s team owner Dan Snyder if given the opportunity: “We are people. We will never be mascots.”

This was the third protest against Washington’s team at Lambeau Field. Over the years, Richie Plass has attended many of these protests at Lambeau and across the country. They can be disheartening, he said, when fans don’t take the message seriously. Plass, who served as a mascot when he was child, is now owner and curator of Bittersweet Winds, a traveling educational exhibit about Native American imagery. He said people have become more open-minded about changing American Indian mascots in recent years. But he still hears negative comments.

“People tell us just get out of the way and you’re wasting time,” he said. “I just thank them for their words and carry on because again we were here first, but we have no voice.”

On his way into the game, Kevin Feltz, of Junction City, stopped by the protest to take a few pictures for a relative in Auburndale who is spearheading a movement to adopt a new non-Native American mascot at a local high school.

“I believe it’s offensive and I totally agree with what’s going on today,” Feltz said.

Oneida Nation purchased a 30-second ad to be shown Sunday on Lambeau Field’s Jumbotron. Barbara Munson said the message portrayed in the video is the antithesis of what’s depicted in Washington’s name and logo.

“It’s accurate, authentic, real people and that’s the exact opposite of a race based stereotype,” she said.